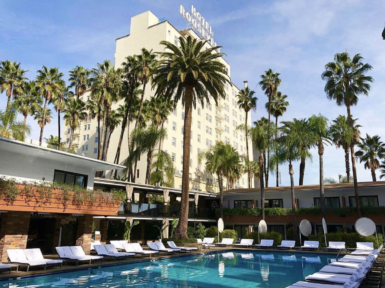 Following its inaugural edition earlier this year, the Felix LA art fair has revealed plans to return to Los Angeles in 2020. Its second edition is set to run from February 13 to 16, and it will once again take up residence in the Hollywood Roosevelt Hotel, where exhibitors will be situated within rooms typically occupied by guests.

According to Mills Morán, who founded the fair with his brother Al and the “ARTnews Top 200″ collector Dean Valentine, the fair’s second edition will include alterations to the fair’s layout. Crowding at the first edition of the fair made it difficult to see large portions of the event, and while Morán declined to offer details as to how the second Felix LA would be different from the first, he said, “We’re working on making it more efficient.” He also said there was a “good chance” that the 2020 edition would feature more galleries than the 2019 one.

The first Felix LA featured 41 galleries, all of whom had been invited to participate. The event coincided with the first editions of Frieze and the Spring/Break Art Show in the city and coincided with the long-running Art Los Angeles Contemporary. For Morán, the week the fairs are held in L.A. already feels like a fixture within the art world. “I feel like this is essential now,” he said. “It’s only going to be a bigger crowd next year.”