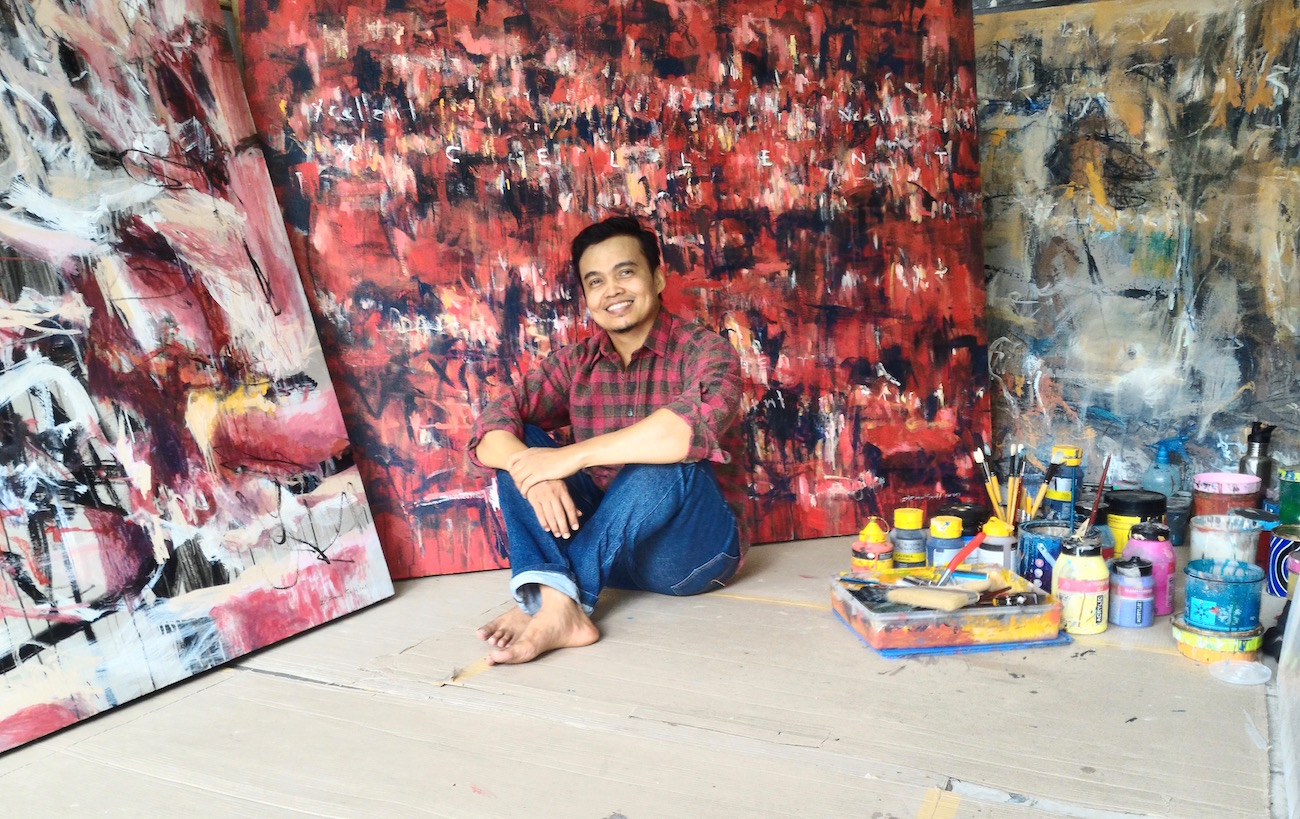 When artist Zulfirman Syah moved to New Zealand early this year in search of a better life for his family—his wife, Alta Sacra, and their two-and-a-half-year-old son Averroes—he was looking forward to showing his work as a painter at the Auckland Art Fair when it opens this week. Instead, he is at home in Christchurch, recovering from multiple gunshot wounds suffered when an Australian white supremacist opened fire in March at the Linwood Islamic Centre after slaughtering dozens at the Al Noor Mosque across town. Fifty people were murdered that day, and many more were injured. To add to the horror, millions around the world watched video of the attack in which Syah is seen shielding his traumatized toddler with his body, both of them desperately fearing for their lives.

Before he made his way to New Zealand, Syah woke up one night to a call to prayer in his native Indonesia. It was late 2017 and he had just recently become a father. As he turned toward Mecca and knelt on his prayer mat, the idea came to him to make artwork informed by dried pigments left behind on his palette from painting sessions from the past. A few days later, after experimenting with a kind of two-dimensional abstract relief that he photographed and recreated with acrylic on canvas, he was confident he had found a new direction for his work. 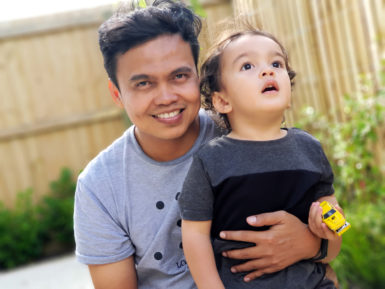 Zulfirman Syah and his son Averroes.

“While I have been influenced by other artists over time, such as Gerhard Richter, Joan Mitchell, and Willem de Kooning, it has been my personal experiences that have influenced my art,” Syah told me by way of an email dictated to his wife from his recovery bed in Christchurch. “Through my devout practice of Islam, I have gained an understanding that everything I produce as an artist has already come from God. My role is to allow that channel of ideas and inspiration to come to fruition through my actions.”

For nearly two decades, Syah lived in the midsize Indonesian university town of Yogyakarta. He was a member of the Sakato Art Community made up of artists from West Sumatra, and he had shown his work in more than 60 exhibitions—in Indonesia as well as far afield in Beijing, Siena, and New York.

Nancy Nan, the founder and director of the nonprofit Redbase Foundation in Jakarta, Indonesia, met Syah through a curator in 2018 when she was looking for new artists to bring to this year’s Auckland Art Fair after a successful first trip. “His latest series has put him on track to develop a serious art career,” Nan said of Syah’s colorfully layered works bearing spiritually inclined titles like Arise, Awake, Grow, and Soar.

The night before the attacks in March, Syah had sent Nan a photograph of Momentum (2019), a painting that now, because of the extent of his injuries, will be his only work at the Auckland Art Fair opening Wednesday. (Continuing through Sunday, the fair features work from 41 galleries from New Zealand as well as Sydney, Melbourne, Hobart, Shanghai, Jakarta, Rarotonga and Santiago.)

On hearing of the plight of Syah and his son, Nan immediately purchased his one remaining painting in Indonesia and wired money to his wife. She also set up a crowd-sourced GiveALittle page to raise funds. “It’s not a lot,” Nan said of the NZ$3,550 (around $2,400 in the U.S.) donated so far. “But it’s from artists who know him.”

Syah’s wife has kept him up to date on the flood of emotional and spiritual support directed his way as he focuses on his recovery. “I have heard about how many different kinds of artists in New Zealand have come together in various ways to provide support for those impacted in these attacks,” he said. “There’s a lot of emotion, and with that emotion often comes inspiration for people who are creative. I don’t know exactly how this experience might influence or affect my own practice over time, but I’m certain that it will.” 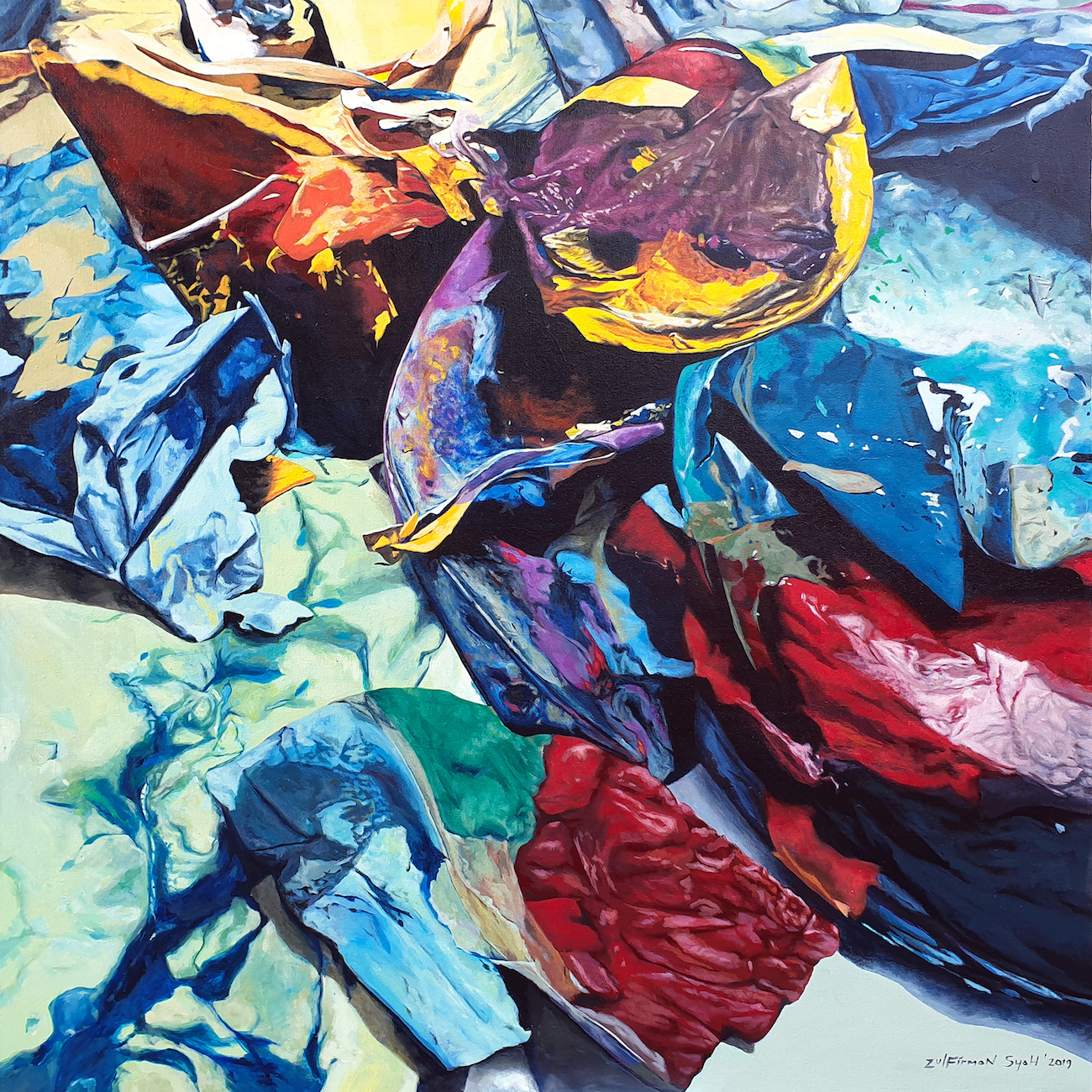 New Zealand is a small country informed by its Māori and colonial Victorian heritage but also, increasingly, by many of the more than 220 ethnic groups that make up a population of 5.5 million. Auckland, home to 1.4 million people—39 percent of them born overseas—is considered more diverse than Sydney, Los Angeles, London, and New York, according to the 2015 World Migration Report from the International Organization for Migration. After the Christchurch attacks, Jacinda Ardern, New Zealand’s prime minister, was roundly praised for embracing the nation’s Muslim immigrant community when she insisted, “New Zealand is their home—they are us.”

And while the average New Zealander would likely uphold the idea that the country is tolerant of different races and religions, in 2017 the high-profile cultural export Taika Waititi—a member of the Māori tribe Te Whānau-ā-Apanui and director of Thor: Ragnarok—told Dazed and Confused magazine that New Zealand was “racist as fuck.” Elaborating, he said, “I mean, I think New Zealand is the best place on the planet, but it’s a racist place. People just flat-out refuse to pronounce Māori names properly. There’s still profiling when it comes to Polynesians.” Waititi has since fronted the country’s Human Rights Commission’s “Give Nothing to Racism” campaign.

Although most of the country’s art galleries are owned by Pakeha (European New Zealanders), some in the art scene believe that the artists being shown in them are beginning to reflect the population. “I applaud the diversity that exists in the New Zealand art scene,” said Jenny Todd, director of Auckland’s Two Rooms gallery. Others disagree. “There is plenty of talk of diversity,” said Anna Miles, director of Anna Miles Gallery. “However, like ‘art worlds’ anywhere, the record of participation by women—for just one example—is pathetic.”

The Auckland Art Fair, which ran biannually until a change in policy last year, has more than tripled in size since an inaugural event in 2005 and has doubled its earnings since 2013—with the 2018 fair resulting in some NZ$7 million (about $4.67 million) in sales. Originally managed by a charitable trust, the fair has been under new corporate management since 2016, and co-directors Stephanie Post and Hayley White have been applauded for celebrating diversity both through the work of New Zealand artists and those from galleries in other parts of the wider Pacific region, from Samoa, Fiji, Vanuatu and the Cook Islands to Korea, Japan, China, and Indonesia. 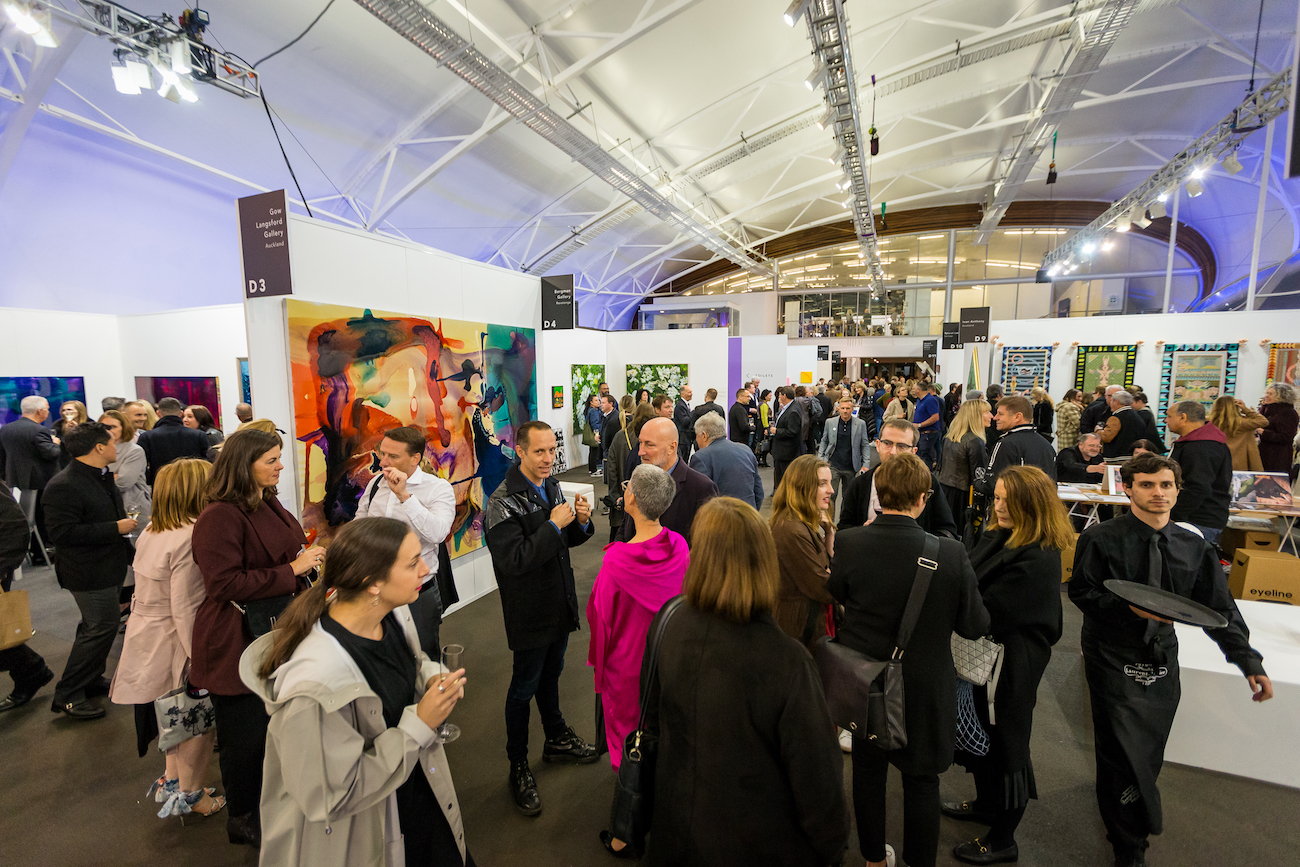 “New Zealand artists come from many different backgrounds,” said Post, “and each speaks, through their work, from their own heritage but living in this shared place.” Asked if she thought the recent attacks would figure strongly in the work by any of the more than 150 artists at the fair, the co-director said she doesn’t see that as likely just yet. “Artists take a bit of time to percolate.”

But soon, some 11,000 miles away, the tragedy will be on the mind of at least one when Aucklander Dane Mitchell debuts his new work Post hoc in the New Zealand Pavilion at the Venice Biennale opening on May 11. “Given the recent atrocities in Christchurch and the county’s collective grief and shock, there is a weightiness to the notion of national representation at Venice for me,” Mitchell told me. “The reverberations of this totally appalling event are palpable everywhere. My work does not directly address this, but the sense of being from New Zealand is very much on my mind.”

After Christchurch, New Zealand’s innocence could be added to the list too.