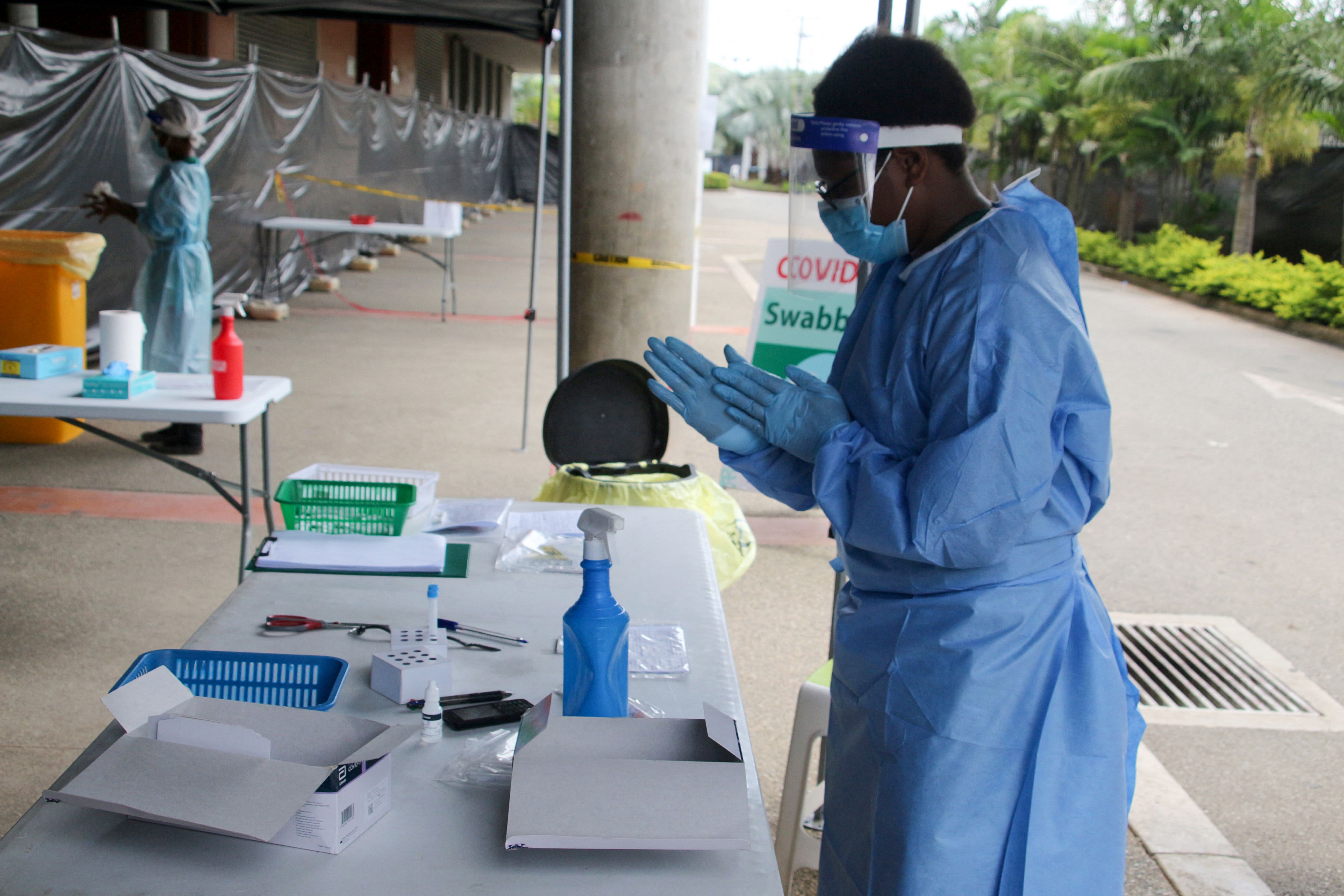 A health worker prepares to do tests for Covid-19 coronavirus outside a makeshift clinic in a sports stadium in Port Moresby on April 1, 2021.Gorethy Kenneth | AFP | Getty ImagesMisinformation on social media is hindering Papua New Guinea’s vaccination efforts.Many people are hesitant about inoculation due to false information being spread about the vaccines even as coronavirus cases are surging, according to the PNG’s Covid-19 response controller.The country reported 1,730 cases and 12 deaths between March 29 and April 4, according to a joint report from the World Health Organization and the PNG national health department.Infection cases saw a fresh surge in February and PNG has reported 7,839 cases so far, data from Johns Hopkins University showed. However, the consensus is that the actual number is much higher, concealed by low testing capacity and other logistical difficulties.”We have been lulled into sort of a sense of complacency, false sense of security that we have gotten over that first wave, that we were dreading,” David Manning, PNG’s Covid-19 national pandemic response controller, told CNBC’s Will Koulouris.Located north of Australia, Papua New Guinea is an island country that’s heavily forested and has a population of fewer than 9 million people.Of course, this is attributed to vaccine hesitancy, and you can attribute that to a lack of awareness.David Manningnational pandemic response controller, Papua New GuineaThe National Capital District, home to PNG’s capital, Port Moresby, has the highest number of reported cases, followed by the Western province where the infection rate is also climbing.A combination of events — funerals, holidays and the resumption of schools — led to the “continuous transmission of the virus,” William Pomat, director of PNG’s Institute of Medical Research, told CNBC last week.Vaccine hesitancySo-called “vaccine nationalism” has made it difficult for small, developing nations like PNG to access shots to inoculate their population. Many of them rely on an international vaccination initiative called Covax but that program’s vaccine supply is facing delays from India, which is also struggling to contain a surge in cases at home.PNG rolled out a vaccination drive last week using about 8,000 doses of AstraZeneca’s Covid-19 shots that were donated by neighboring Australia. More doses are reportedly expected in the coming weeks from China and India.The island-nation has vaccinated fewer than 600 people so far, putting it way behind schedule, according to Manning.”Of course, this is attributed to vaccine hesitancy, and you can attribute that to a lack of awareness — basically, information around, if there are any side effects of the vaccine and the false news that’s being propagated through social media,” he said, adding there’s comparatively less pushback from vaccine skeptics in urban areas.Battling misinformationManning said Facebook reached out to PNG asking how the social network could help dispel some of the misinformation being spread, but he did not expand on the details of that conversation.Facebook launched a public education campaign in PNG this week to help users there learn how to identify and combat health misinformation. It will run for five weeks and include graphics and videos in multiple languages.”For this campaign, we are focusing our efforts further to target Covid-19 and vaccine related misinformation, ensuring that Papua New Guineans are able to scrutinise what they are seeing against official public health resources,” Mia Garlick, director of public policy for Australia, New Zealand and Pacific Islands at Facebook said in a statement Wednesday.”This campaign also adds on to a prompt we launched in Papua New Guinea last week toprovide local users with Covid-19 prevention tips,” Garlick added.Stressed health-care infrastructureThe outbreak is putting excessive stress on PNG’s already poor health-care infrastructure.International organizations such as Medecins Sans Frontieres (MSF) have warned of an imminent collapse. Many frontline health-care workers, who are already few in numbers, are falling ill with Covid-19, experts said.”If they get sick, then we won’t have anyone standing — not only for Covid, but other diseases and so on,” said Pomat from the Institute of Medical Research.He explained that Covid testing is only being done for those who “might show up (at) a health facility when they are showing symptoms, and those who are volunteering to go in.”Even then, hospitals and medical facilities are running out of components needed to carry out those tests.While PNG is working with its development partners, including Australia, to secure supply of more test kits and components, it has also implemented tighter social restrictions. For example, shops have been asked to deny entry to people not wearing masks while inter-provincial travel is strictly regulated.Manning said the pandemic response needs to be tailored to PNG’s coastal communities as well as the highlands region where even at the best of times, it’s tough to deliver health care, police or government services.”So we’ve now shifted our focus from a national response to a provincial response, and working closely with those provincial health authorities that are currently being inundated with surges,” he said.