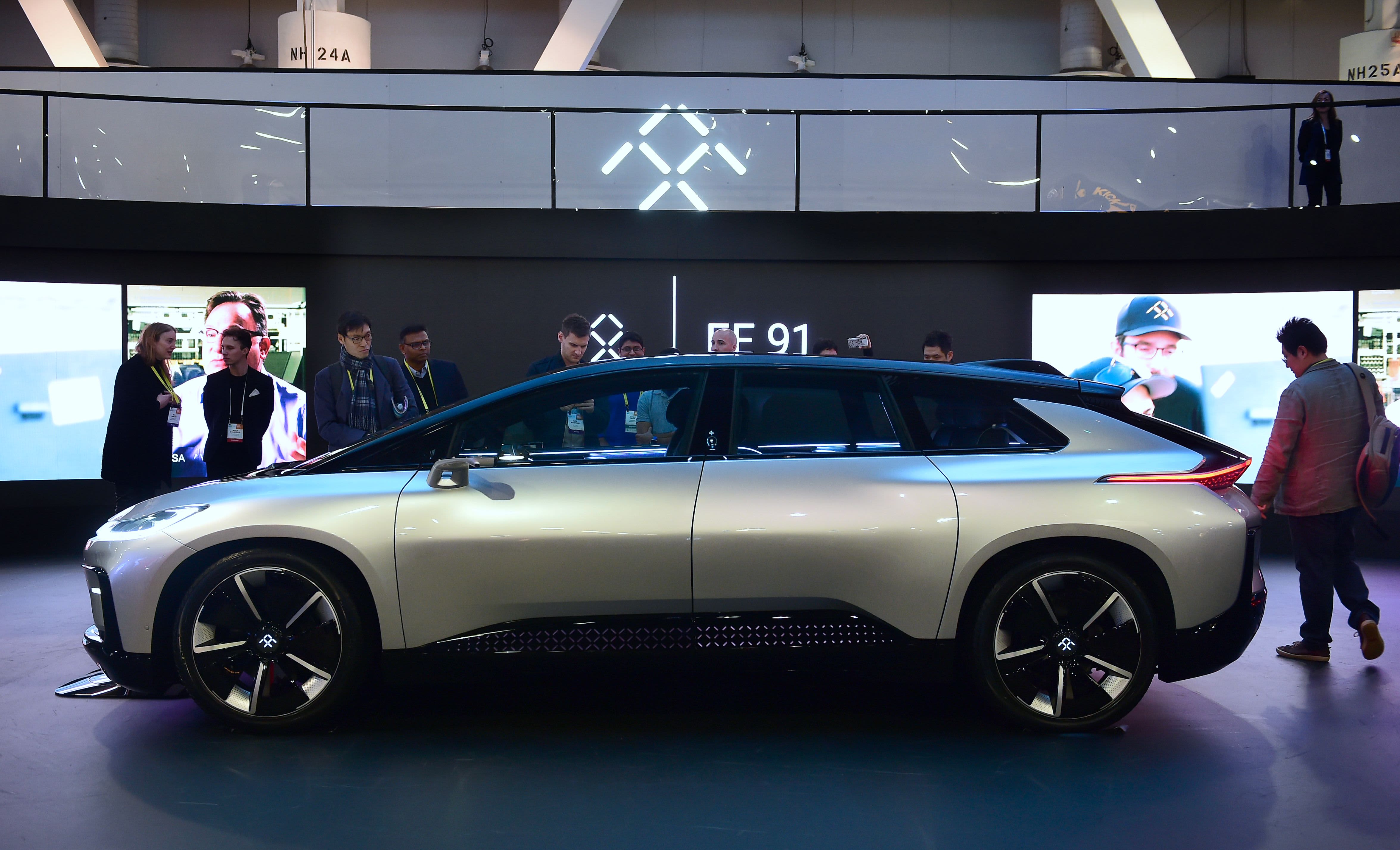 Attendees look at Faraday Future’s FF 91 prototype electric crossover vehicle after it was unveiled at CES 2017 on January 3, 2017, in Las Vegas.Getty ImagesFaraday Future was expected to be the “next Tesla.” It was going to be a leader in electric vehicles with its groundbreaking FF 91 crossover that would usher in an “entirely new species” of automobile.Those were some of the claims surrounding the California EV start-up during an elaborate unveiling of the FF 91 at the Consumer Electronics Show in January 2017. If all had gone to plan, the vehicle would have been on the market now for several years, ahead of an influx of EVs from emerging start-ups and traditional automakers.Instead, the opposite happened. The executives that made those proclamations left Faraday Future; it abandoned a plan for a $1 billion factory in Nevada; and it has yet to build one vehicle. Its founder and CEO, Chinese billionaire Jia “YT” Yueting, also filed for bankruptcy in 2019.But Faraday Future now has new life – and capital – thanks to a SPAC deal with Property Solutions Acquisition Corp. that is providing the embattled automaker with $1 billion. The company’s shares shot up by more than 15% minutes into its debut Thursday on the Nasdaq under the ticker FFIE.It’s a new beginning for Faraday Future but also a countdown to proving its worth to investors, including starting production and sales of the FF 91 within a year from now.”We have been able to convince the capital market that this is a different company now, a company which can deliver a serious business plan,” Faraday Future CEO Carsten Breitfeld said in an interview. “But now we have to deliver, and this is absolutely key.”Delivering on plans is something newly public EV start-ups have not been able to do. Starting with Nikola last year, SPAC deals for the automotive industry exploded, but reality has set in for many companies. Bold claims by executives have led to federal investigations into EV start-ups such as Nikola, Canoo and Lordstown Motors, which last month warned investors of potential bankruptcy concerns.Other EV start-ups such as privately held Rivian and Lucid, which is soon expected to go public via a SPAC merger, have delayed production and delivery of their first vehicles.”Building a vehicle is not that easy to do,” IHS Markit principal automotive analyst Stephanie Brinley said. “It’s a very complex process and it’s very capital intensive. Even experienced automakers run into situations from time to time where programs are delayed.”‘Under promise and over deliver’Breitfeld, a former BMW executive, said the plan he sold to investors is achievable. It includes beginning production of limited-edition FF 91 for $180,000 in the next 12 months, followed by less expensive models and other EVs in the months and years to come.”There’s one simple, single plan for the next 12 months and this is getting the car out to the customers,” he said. “It’s what I promised and what I’m going to deliver.”Breitfeld said he plans to “under promise and over deliver” to investors. The company’s production ramp-up is faster than fellow luxury EV start-up Lucid, which is expected to begin deliveries of its first vehicle — a $169,000 sedan called the Air “Dream Edition” — later this year.Faraday Future’s FF91 electric car on display at the 2017 Consumer Electronic Show (CES) in Las Vegas, Nevada on January 7, 2017.Frederic J. Brown | AFP | Getty ImagesFaraday Future is expected to build 2,400 vehicles next year, followed by 38,600 units in 2023 and more than 300,000 vehicles in 2025. That compares to Lucid at 20,000 next year and 135,000 vehicles by 2025.Faraday has a nearly completed plant in California that’s capable of producing up to 30,000 vehicles a year. It also has plans for manufacturing partnerships in South Korea and China.  Breitfeld said the company has more than 14,000 reservations for the FF 91, but many of them don’t include down payments. That’s down from a reported 64,000 reservations following the car’s debut in 2017, which were free or through a $5,000 deposit for a “priority reservation.”Looking to the FutureAside from a cash influx, Faraday Future’s SPAC deal helps erase up to $150 million in debt owed to suppliers, which will be taking a stake in the post-merged company, Breitfield said. The company declined to disclose what percentage of Faraday Future the suppliers will hold and how much debt will be erased.The debt-to-equity swap is one of several things Breitfeld said the company needed to complete before it could go public and launch the vehicle. Others included changing the perception of the company with media and investors as well as better executing its plans and putting controversies with China and its founder, Jia, behind it.”This is all behind us,” Breitfeld said in a previous interview in February. “This is the past and this is a different company now.”Faraday Future’s newly created FF Futurist Experience studio, located at 5 East 59th Street in New York City.Faraday FutureJia remains with the company as chief product and user officer but does not hold an ownership stake, according to Breitfeld.Despite the changes and new funding, Guidehouse Insights principal analyst Sam Abuelsamid believes Faraday Future still has significant hurdles to be successful. One obstacle is a more competitive market than the company’s original plans from CES 2017.”They are launching with just one car, with others in following years and we’ll see if they can actually get it into production,” he said. “If it does arrive, then they’re entering a much more crowded and tougher market to compete in for somebody like Faraday Future that has no track record or, to the extent they have a track record, it’s a very spotty one.”Breitfeld argues that now is a “better time” to launch anew because there’s more government support for EVs as well as more demand from consumers. But he knows challenges remain to get to market and separate itself from its past and other speculative SPAC-backed companies.”I don’t like this grouping approach too much because SPAC is basically a tool of going to market,” he said. “Of course, time will show who really will survive and how this will work out, but we feel we’re in a very comfortable and strong position.”

Biden says what others are ‘afraid to say’ about tech, Salesforce’s Marc Benioff says
Texas and Florida get involved in Israel’s fight with Ben & Jerry’s over West Bank boycott
To Top
error: Content is protected !!