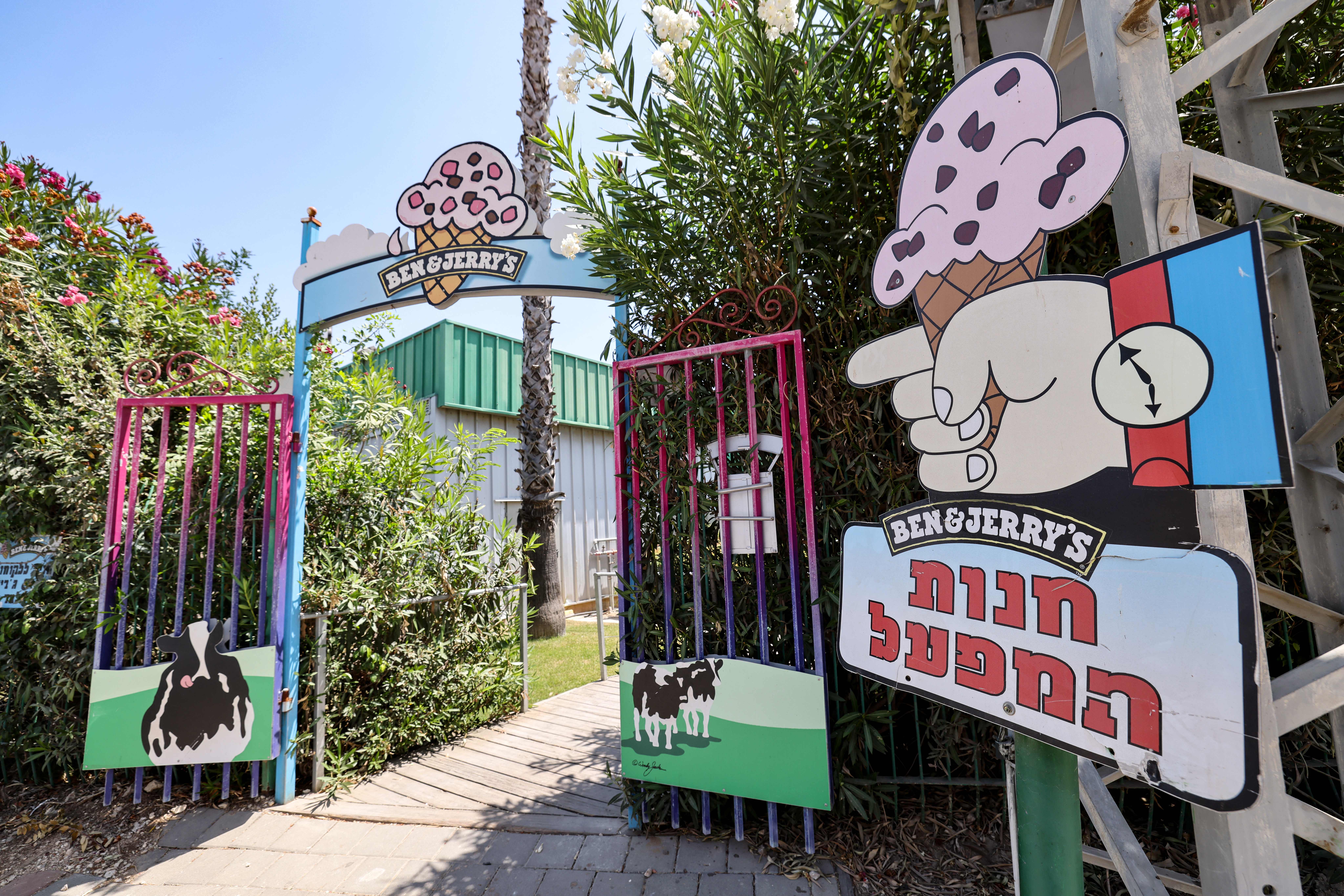 A view of the entrance of the ice-cream shop inside the Ben & Jerry’s factory in Be’er Tuvia in southern Israel, on July 21, 2021.Emmanuel Dunand | AFP | Getty ImagesThe fight between Israel and Palestinians is spilling over into 30 U.S. states with laws on their books preventing pension funds from investing in companies that refuse to do business with the Jewish state.The freshest example involves the socially conscious ice cream brand Ben & Jerry’s, the West Bank, Texas and Florida.Earlier this week, the Ben & Jerry’s board said it would no longer allow sales in areas it believes Israel should not control. The company released a statement saying “we believe it is inconsistent with our values for Ben & Jerry’s ice cream to be sold in the Occupied Palestinian Territory.” The company, now owned by global consumer giant Unilever, has sold its brand in Israel for decades through a local Israeli distributor. Unilever said it would seek a new deal to sell ice cream in Israel, but not in territory claimed by Palestinians for a state of their own. On Thursday, Unilever CEO Alan Jope said the company “remains fully commited to our business in Israel.”In Israel, businesses are prevented from treating customers and subsidiaries differently in what Israel calls “disputed territory” versus those in what much of the world recognizes as Israeli territory. Israeli Prime Minister Naftali Bennett vowed this week to “act aggressively” against the ice cream company, which was founded in 1978 by Ben Cohen and Jerry Greenfield, who are Jewish and progressive-minded.The American flag and the Texas State flag fly over the Texas State Capitol in Austin, Texas.Brian Snyder | ReutersNow, Texas and Florida are getting involved. A spokesman for GOP Texas Gov. Greg Abbott told CNBC on Tuesday night: “Ben and Jerry’s decision to boycott parts of Israel is disgraceful and an insult to America’s closest ally in the Middle East.” The statement went on to say: “Unilever, Ben and Jerry’s parent company, must reverse this ill-conceived decision.”Abbott signed a bill into law four years ago that would force Texas pension funds to divest from any company boycotting Israel.State Comptroller Glenn Hegar, who controls billions of dollars in assets for Texas’ public pension funds has already told his office to take action. In a statement to CNBC he said, “I’ve directed my staff to determine whether any specific action has been taken by Ben & Jerry’s or Unilever would trigger a listing under Chapter 808 of the Texas Government Code,” the law passed in 2017.It is also possible sales in states with anti-boycott laws could be impacted. If Ben & Jerry’s or Unilever bids for a contract at a public institution, they could be disqualified if the boycott becomes a reality.Florida state CFO Jimmy Patronis, who controls public pension funds, told CNBC his office is already discussing the issue.In a letter sent to Ben & Jerry’s CEO Matthew McCarthy on Thursday, Patronis wrote, “It is my belief that Ben & Jerry’s brazen refusal to do business in Israel will result in your placement on the Scrutinized Companies that Boycott Israel List.”The missive, which was seen by CNBC, also said the state would then “be prohibited from investing in Ben & Jerry’s or its parent company, Unilever.”Being added to the list also means the company won’t be able to enter or renew contracts with the state or any municipality in Florida.Airbnb was the last company to find itself tangled in a similar issue. In 2018, the rental site said it was banning listings of Israeli property in the West Bank, territory Palestinians claim should be part of their state. An Airbnb listing in IsraelAirbnbBut the company reversed itself a few months later and now looks at listings on a “case-by-case approach” according to a statement on its website.Ben & Jerry’s board, which has a unique agreement with parent company Unilever allowing for an outsized role in decisions regarding social issues, initiated the move this week to pull out of Israel.After Ben & Jerry’s statement, Unilever released one of its own Monday saying “we remain fully committed to our presence in Israel, where we have invested in our people, brands and business for several decades.” In addition, Unilever’s CEO spoke this week with Bennett. After the conversation, Israel’s new prime minister said: “This is an action that has severe consequences, including legal, and it (Israel) will take strong action against any boycott directed against its citizens.”Ben & Jerry’s Chair Anuradha Mittal has not responded to CNBC regarding the impact of the decision and the possibility that state pension funds could divest from Unilever. In a phone interview Thursday, Ben & Jerry’s spokesman Sean Greenwood said: “The company has nothing to add beyond the original statement” issued Monday.Speaking to NBC News earlier this week, Mittal went after Unilever for issuing its own statement on the issue calling it “deceit.” She added: “I can’t stop thinking that this is what happens when you have a board with all women and people of color who have been pushing to do the right thing.”Unilever has not returned CNBC calls or emails seeking reaction to the possibility of divestment by state pension funds.