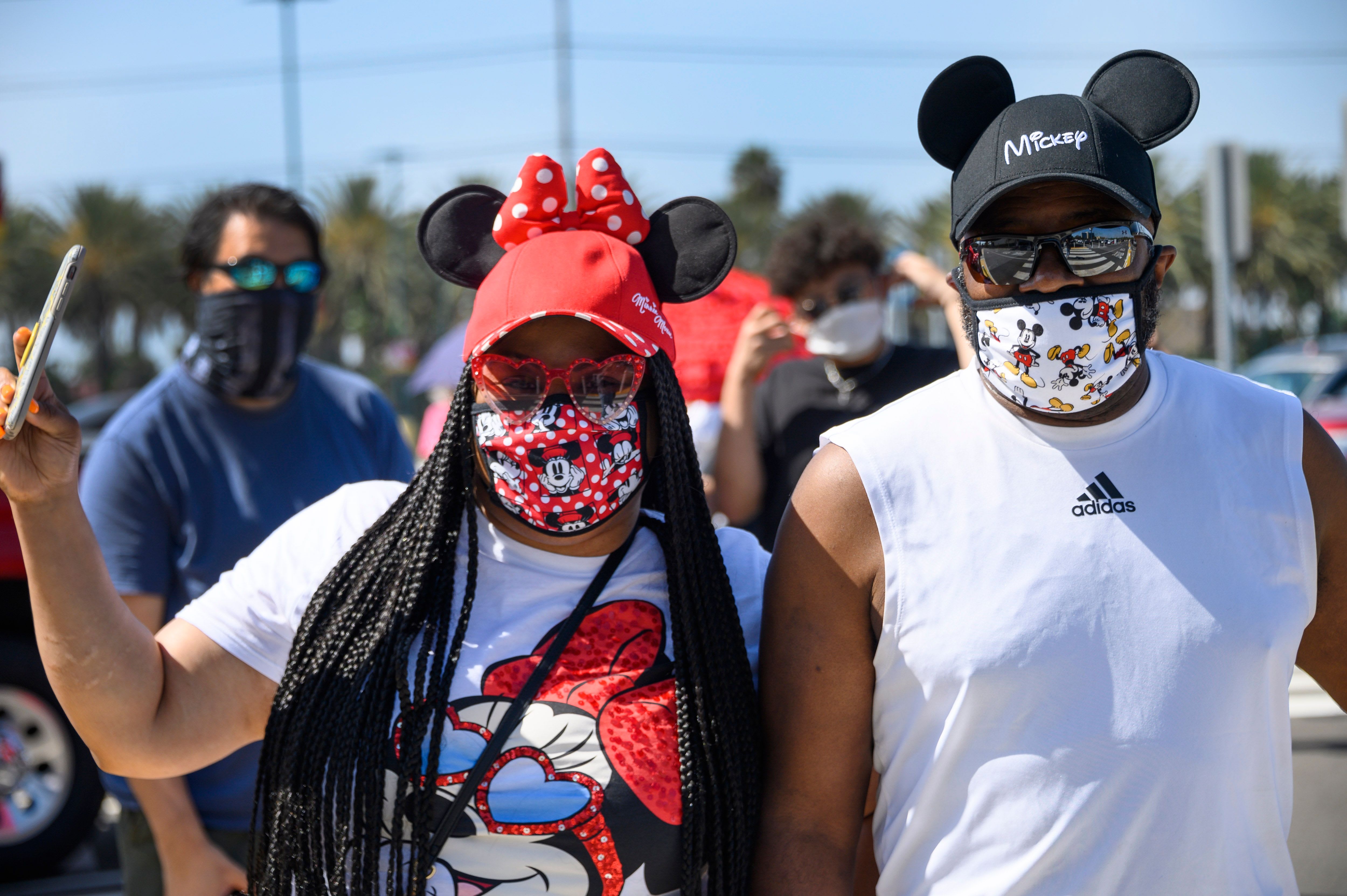 A couple waits in line to enter Downtown Disney in Anaheim, California on July 9, 2020, the first day the outdoor shopping and dining complex has been open to the public. (Photo by Robyn Beck / AFP) (Photo by ROBYN BECK/AFP via Getty Images)ROBYN BECKWalking up Main Street to Cinderella’s Castle at Walt Disney World in Orlando, Florida may look at little different in the wake of the coronvirus pandemic, but that doesn’t seem to be dampening the spirits of Disney’s cast members or its most avid fans. On Saturday, Disney began its phased reopening of its theme parks in Florida in the midst of a record number of new Covid-19 cases in the state. The company is keenly aware that all eyes are on it this weekend, but its leadership has expressed confidence in its increased safety measures and altered operations.”There’s a lot of trust here, both from our cast members and our guests, and we’ve got a responsibility to deliver on that trust,” said Josh D’Amaro, chairman of Disney’s Parks, Experiences and Products segment.While D’Amaro declined to give specific ticketing numbers, he noted that guests are booking reservations to visit Disney’s parks and resorts as far out as 2021.”People love Disney, they love the experiences here,” he said. “They understand the world is different, they are watching us put together these great plans and we are seeing them book for the near term and the long term.”D’Amaro was officially named to the post of chairman in May, about four months after Bob Chapek departed the position to replace Bob Iger as CEO. He took the helm of Disney’s parks, resorts, cruises, experiences and consumer products a little under three months after the company was forced to shutter all of its theme parks due to the coronavirus pandemic.It’s no easy feat to restart such a massive part of Disney’s business. The segment as a whole accounted for 37% of the company’s $69.6 billion in total revenue last year. While rival parks Universal Studios and SeaWorld reopened their gates in early June, Disney postponed its reopening until mid-July in order to bring back its massive number of employees and retrain them in its new safety procedures. As Disney has prepared to reopen its parks, D’Amaro has spent the last week interacting with cast members and guests during soft opening events at its parks in Florida. He said that cast members are comfortable with Disney’s new safety measures, which include a mandatory mask policy and temperature checks, and that guests have been “cooperative” with the parks’ new rules.At Disney Springs, which reopened in late May, “all guests are wearing their face masks and everyone understands their shared responsibility,” D’Amaro said. Disney has employed specific cast members to look out for guests that “may have had a little slip up” and didn’t replace their mask after eating or drinking, D’Amaro said. Because of all the signage and communication from the company about expectations and rules, he doesn’t expect there to be too many incidents. Disneyland in California is still awaiting guidelines from government officials before announcing its new reopening date, but guests can expect a similar set of safety measures in Anaheim, D’Amaro said.Additionally, the construction of Avengers Campus, a new land that was slated to open in July of this year, “will definitely be moving forward” and is “looking fantastic,” he said. D’Amaro did not provide a specific timeline for when that new Marvel-themed land would open to the public. On Saturday, Magic Kingdom and Animal Kingdom in Florida reopen to the public, and will be followed by Epcot and Hollywood Studios on July 15. Disneyland Paris is also slated for reopening on July 15.”We feel really good about everything that is in place,” D’Amaro said.Disclosure: NBCUniversal is the parent company of Universal Studios and CNBC.