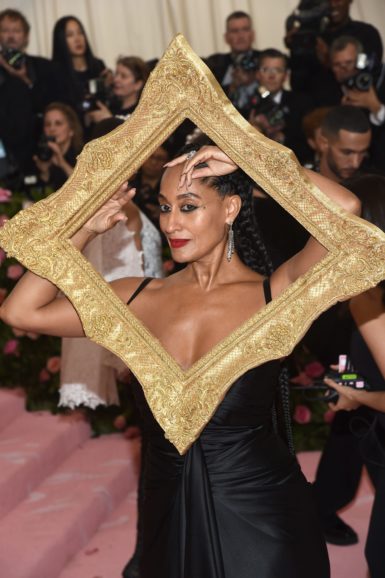 At Monday night’s Metropolitan Museum of Art Costume Institute gala in New York, one celebrity taking up the evening’s theme of “camp” boasted a look that appeared to reference a notable artwork.

That celebrity was Blackish actress Trace Ellis Ross, who arrived at the event in a black gown with a gold frame attached. For many on social media, the work recalled Lorraine O’Grady’s Art Is …, a performance work from 1983 for which the artist brought golden frames to an African-American Day Parade in Harlem and encouraged attendees to pose within them.

O’Grady’s work—which the subject of a Studio Museum in Harlem show in 2015—was documented in photographs of young men and women dancing and smiling inside the frames. For O’Grady, the piece was a way of bringing art into everyday life.

Ross’s look for the spectacle at the Met—in advance of “Camp: Notes on Fashion,” a big interdisciplinary exhibition opening to the public on Thursday—was overseen by Karla Welch, who is currently one of the most sought-after stylists working today. (The black dress was by Moschino.) “It’s how we make ourselves art,” Welch told InStyle on Monday. “For me, camp is a vessel for art, and we took that into consideration. Also, a woman is a piece of art, so there’s something there as well.”

As for whether O’Grady was the inspiration, a representative for Welch did not immediately respond to a request for comment.