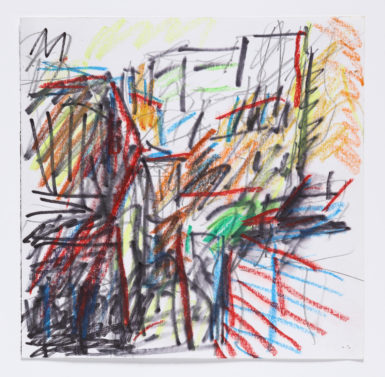 Who doesn’t love a good Venice homecoming story? Frank Auerbach, who won a Golden Lion while representing Great Britain at the 1986 Venice Biennale, is back in town with a small but potent exhibition at the shoebox-sized Alma Zevi gallery. As its proprietors note, this is Auerbach’s first solo outing in La Serenissima since that victory, and it features 10 recent drawings by the 88-year-old artist of a cityscape near his London studio—all quick scribbles and arrays of lines in crayon, felt-tip pen, graphite, and ink.

Seen alone, each is a thrilling near-abstraction, a tangle of color; together, though, they evince an artist gamely experimenting, trying to make sense of the space in front of him. A gorgeous 2006–07 painting, a cityscape with a teal sky and patches of peach, yellow, and green (they’re buildings, probably), is the cherry on top. A roadsign is legible in it, containing a message that could be Auerbach’s motto: NO STOPPING.