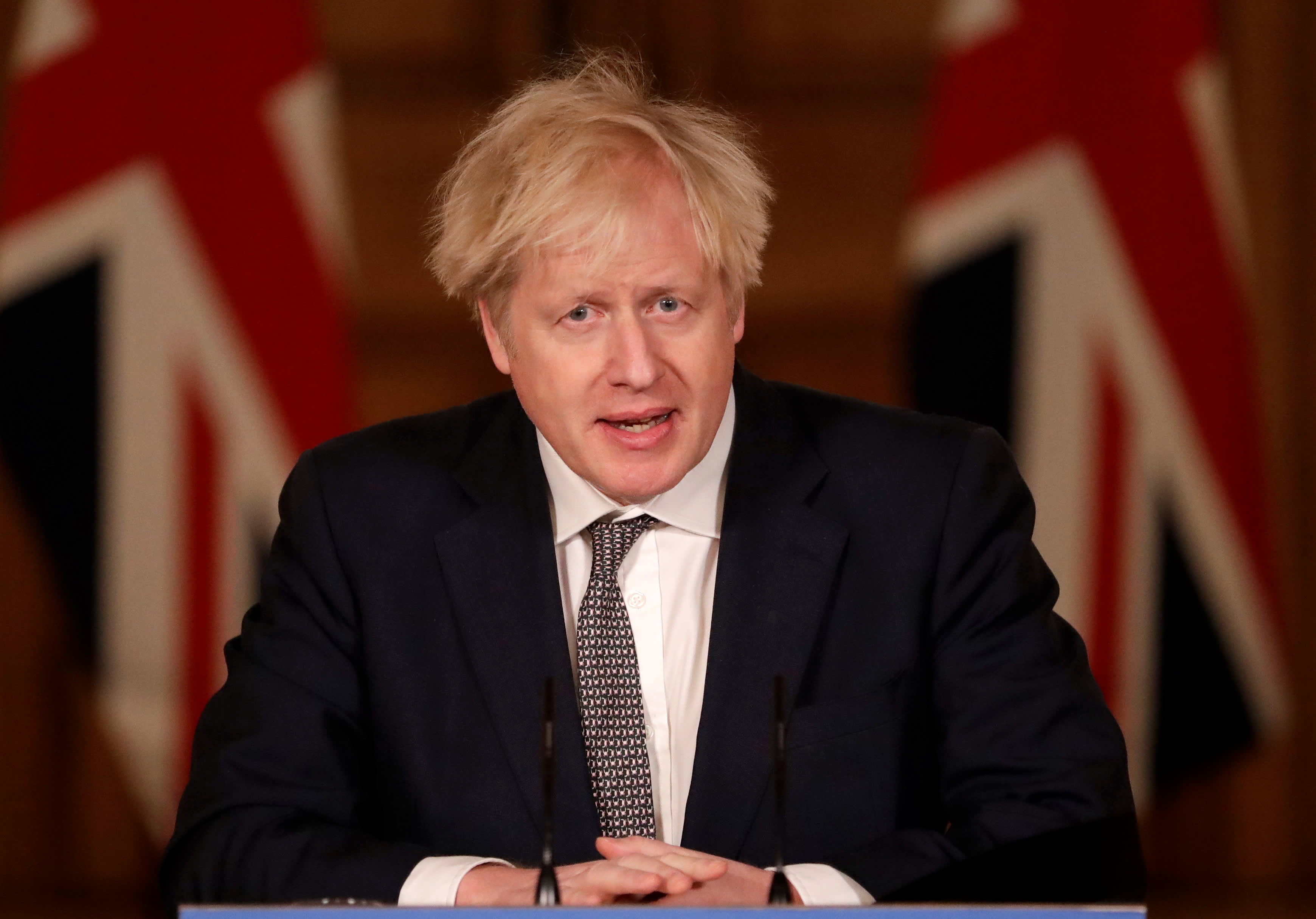 Britain’s Prime Minister Boris Johnson, wearing a face mask to prevent the spread of the coronavirus, visits a pharmaceutical manufacturing facility during a visit to the north east of England on February 13, 2021.WPA Pool | Getty Images News | Getty ImagesLONDON — U.K. Prime Minister Boris Johnson on Monday announced his plan for the lifting of lockdown restrictions in England.The lockdown easing will come in a number of steps and will be data dependent at every stage, Johnson said. The first step will see schools in England reopen on March 8, while recreation in outdoor public places like parks — such as going for a picnic or coffee — will also be allowed between two people.By March 29, people will no longer be legally required to stay at home but will be advised to continue to work from home where they can and minimize travel. Outdoor gatherings of two households or six people will also be allowed.The second step will entail further lifting of restrictions, with non-essential shops, hairdressers and other places set to reopen from April 12. By June 21, the government hopes to abolish all legal limits on mixing and to reopen the last sectors to remain closed, such as nightclubs.Data, not datesJohnson has repeatedly said that the relaxation of measures will be cautious and driven by “data, not dates.” However, he has also said he wants the lifting of restrictions to be “irreversible” as he comes under pressure from members of his Conservative Party to re-open the economy.Nonetheless, the government has maintained that the easing must be done in stages to avoid any leaps in infection rates.”Today I’ll be setting out a roadmap to bring us out of lockdown cautiously,” Boris Johnson said in comments released ahead of Monday’s announcement.”Our priority has always been getting children back into school which we know is crucial for their education as well as their mental and physical wellbeing, and we will also be prioritising ways for people to reunite with loved ones safely.”Patients arrive in ambulances at the Royal London Hospital, on January 05, 2021 in London, England. The British Prime Minister made a national television address on Monday evening announcing England is to enter its third lockdown of the covid-19 pandemic. This week the UK recorded more than 50,000 new confirmed Covid cases for the seventh day in a row.Dan Kitwood | Getty Images News | Getty Images”Our decisions will be made on the latest data at every step, and we will be cautious about this approach so that we do not undo the progress we have achieved so far and the sacrifices each and every one of you has made to keep yourself and others safe,” he added.Four key testsJohnson said the government has set four key tests which must be met before Britain can move through each step of the plan. These are:That the vaccine deployment program continues successfully.Evidence shows vaccines are sufficiently effective in reducing hospitalizations and deaths in those vaccinated.Infection rates do not risk a surge in hospitalizations which would put unsustainable pressure on the National Health Service.That its assessment of the risks is not fundamentally changed by new coronavirus variants of concern.Variants and vaccinationsOne silver lining in the U.K.’s experience of the pandemic has been its vaccination response. It was the first country in the world to approve a coronavirus vaccine, the candidate from Pfizer and BioNTech, and to roll out the shot in early December to its most elderly members of the population, care home workers and healthcare and hospital staff.It then approved and starting administering the AstraZeneca/University of Oxford jab, a cheaper vaccine that’s produced in the U.K. and is easier to transport and store than rival jabs, allowing it to maintain an enviable rate of immunizations.It has since expanded the rollout to more priority groups, such as all those deemed clinically vulnerable, and plans to vaccinate every U.K. adult citizen before the end of July, bringing forward that target from September. As of Saturday, over 17.5 million adults have received their first dose of a coronavirus vaccine, with over 600,000 having received both doses, according to government data.Florian Hense, senior economist at Berenberg, told CNBC Monday that “the rest of the world is looking at the U.K.” to see how the lifting of restrictions goes.”There are a number of issues why the U.K. should do relatively well over the next few months given that they’ve brought down infections so significantly … and that there is more news on how effective the vaccines are. But of course it’s going to take a couple of months to get back to more levels of normality,” he said.Ed Davey, leader of the opposition Liberal Democrats party, told CNBC that the government was right to prioritize getting children back to school but questioned the logic of all pupils returning at once, a concern also raised by teachers and unions.”If there was a fourth lockdown, because the prime minister gets it wrong again, then that would be a disaster for our schools and businesses,” he said. “So the Liberal Democrats are saying that of course we welcome a reopening, but let’s do it in a way that prevents and avoids a fourth lockdown.”Data shows that new infections are falling, with early studies indicating that coronavirus vaccines also help to prevent transmission of the virus, as well as preventing serious disease.In the last seven days, the U.K. has seen 77,432 new cases of the coronavirus, down 16.2% from the previous weekly count. The number of deaths in the last seven days, 3,414 fatalities, is also 27.4% lower than the previous seven-day count. Hospitalizations are also falling.