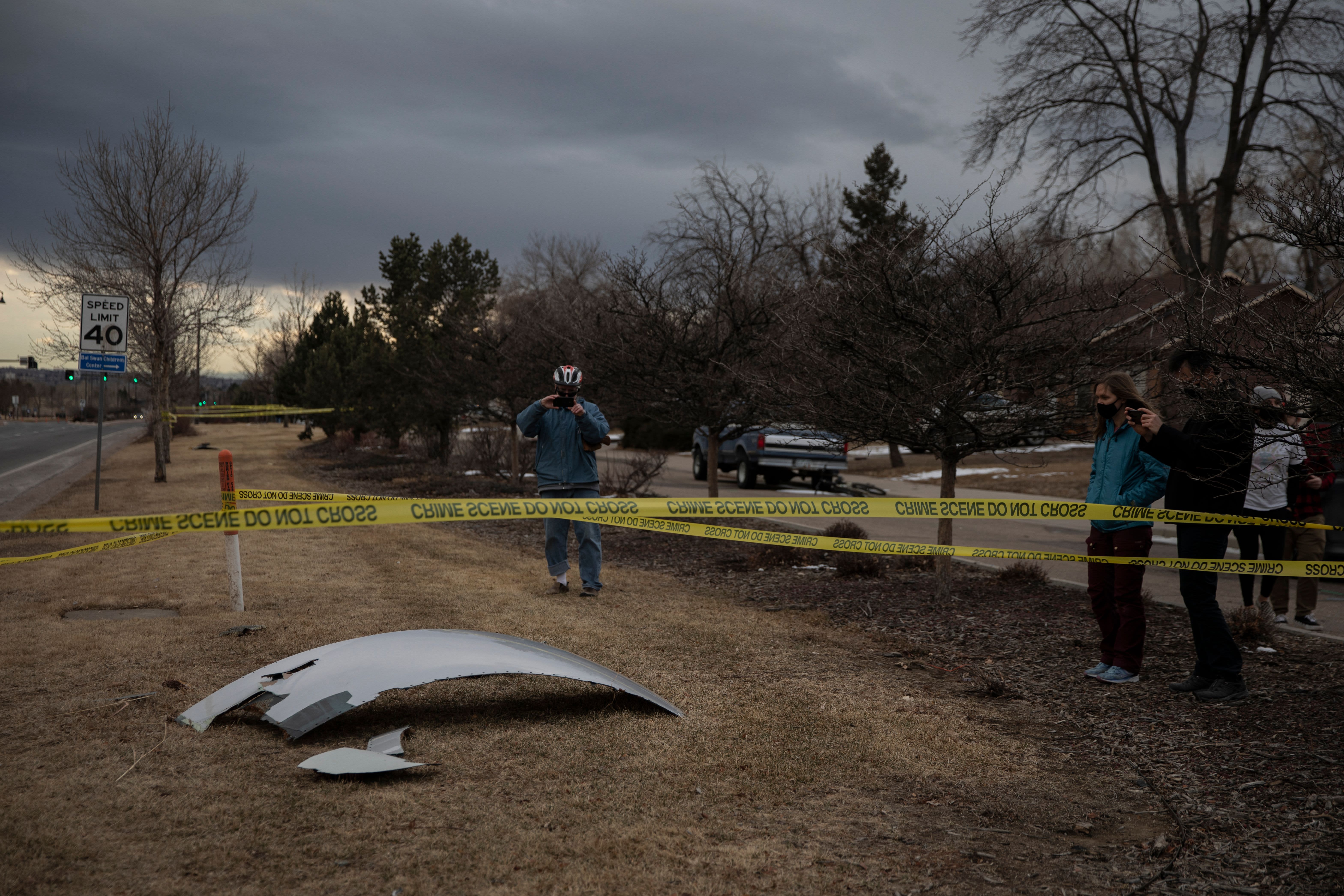 Residents take pictures of debris fallen from a United Airlines airplane’s engine on the neighborhood of Broomfield, outside Denver, Colorado, on Feb. 20, 2021. A United Airlines flight suffered a fiery engine failure Feb. 20, shortly after taking off from Denver on its way to Hawaii, dropping massive debris on a residential area before a safe emergency landing, officials said.Chet Strange | AFP | Getty ImagesUnited Airlines said Sunday that it will temporarily remove 24 of its Boeing 777s from service after one of the planes suffered an engine failure over the weekend.The head of the Federal Aviation Administration said Sunday the agency will order the inspection of some Boeing 777 jetliners powered by the same Pratt and Whitney engine, the PW4000.Japan’s aviation regulator has ordered airlines to suspend flights of aircraft with this type of engine until further notice, the FAA said. United is the only U.S. airline with this type of engine in its fleet, added the agency.United Flight 328, a Boeing 777-200 bound for Honolulu, made an emergency landing at Denver International Airport shortly after takeoff on Saturday afternoon after its right engine failed.No one was injured in the flight that was carrying 229 passengers and 10 crew members, but debris, including what appeared to be a piece of the engine covering, fell in nearby Broomfield, Colorado.Separately, Boeing said it recommended the halting of its 777 aircraft with the same kind of engine as the United flight that dropped debris near Denver.”While the NTSB investigation is ongoing, we recommended suspending operations of the 69 in-service and 59 in-storage 777s powered by Pratt & Whitney 4000-112 engines until the FAA (Federal Aviation Administration) identifies the appropriate inspection protocol,” Boeing said in a statement.Federal investigators said their initial investigation revealed two of the right engine’s fan blades were fractured.The National Transportation Safety Board said one of the engine’s fan blades was fractured near its root while another was fractured half-way through. Other engine fan blades were also damaged, the NTSB said in an initial report late Sunday.”We reviewed all available safety data following yesterday’s incident. Based on the initial information, we concluded that the inspection interval should be stepped up for the hollow fan blades that are unique to this model of engine, used solely on Boeing 777 airplanes,” FAA administrator Steve Dickson said in a statement.United has another 28 of these aircraft in its fleet that are currently in storage. Airlines parked or retired dozens of planes after demand fell because of the Covid-19 pandemic. The planes are also operated in Japan and South Korea.Engine maker Pratt and Whitney, a Raytheon Technologies unit, said in a statement that the company is “actively coordinating with operators and regulators to support the revised inspection interval of the Pratt & Whitney PW4000 engines that power Boeing 777 aircraft.” Pratt and Whitney said it will continue to ensure the safe operation of the fleet.United operates 44 other Boeing 777s that are powered by General Electric engines.Similar incidentsSuch incidents are rare but have occurred in recent years.In February 2018, another United Airlines 777-200, outfitted with Pratt and Whitney PW4077 engines, suffered engine failure over the Pacific near Hawaii, after a fan blade fractured, according to an NTSB report released in June. The flight made it safely to Honolulu with 364 passengers and 10 crewmembers.In April 2018, a passenger was killed when a fan blade broke off from a Southwest Airlines Boeing 737’s engine, breaking a window and briefly sucking the passenger partially outside.

United Boeing 777 suffers engine failure after takeoff from Denver, debris found but no injuries
Details and dates of how it could be lifted
To Top
error: Content is protected !!