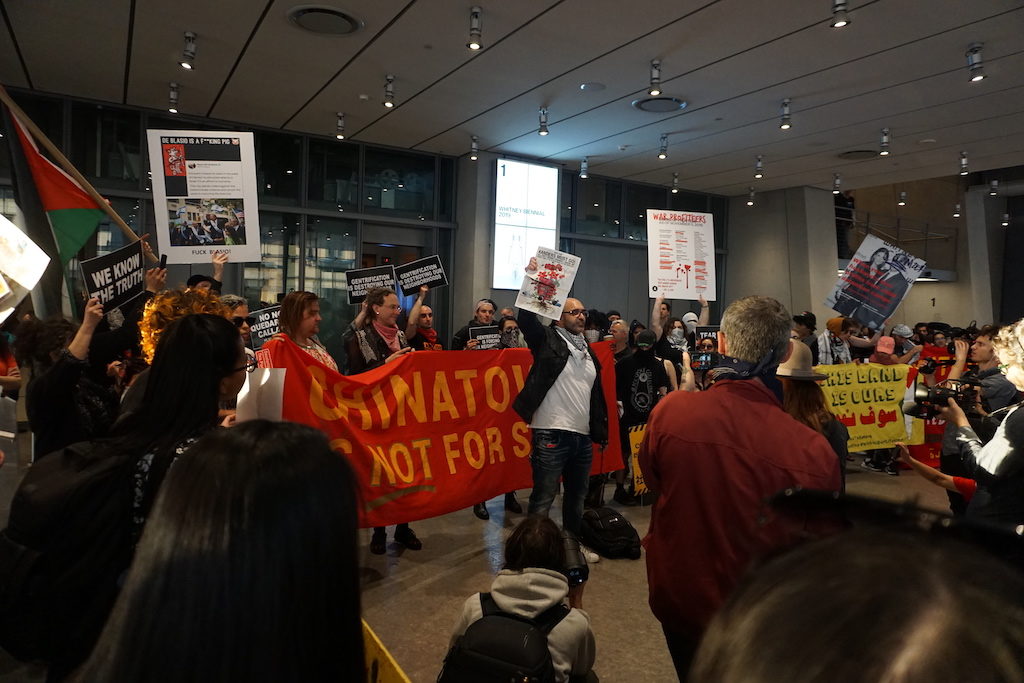 On Friday, at the Whitney Museum in New York, the activist collective Decolonize This Place staged the final protest in its “Nine Weeks of Art and Action” series, through which one protest against Warren B. Kanders, the vice chair of the Whitney’s board, was held at the museum each Friday. The event at the Whitney was preceded by one in downtown Manhattan that was led by the group Chinatown Art Brigade and meant to call attention to gentrification in the neighborhood.

The protest took place on the first night that the Whitney Biennial was open to the public. The Biennial has itself already been the source of contention—on Wednesday, during an opening reception for the exhibition, the Indigenous Womxn’s Collective staged an action in protest of Kanders. More than half of this year’s participants had also added their names to an open letter on the blog of Verso Books, a Brooklyn-based publishing house, that called for his removal from the Whitney’s board.

Reporting in November linked Kanders to Safariland, a company that manufactures tear gas canisters, which he has owned on and off since 1996. Following reports that Safariland canisters had been thrown at asylum seekers in Tijuana, a Mexican city near the U.S. border, nearly 100 Whitney signed an open letter in which they called on Adam Weinberg, the museum’s director, and other higher-ups at the museum to consider asking for Kanders’s resignation. In response, Kanders said he was “not the problem,” and Weinberg encouraged staff members to start a dialogue about the controversy. 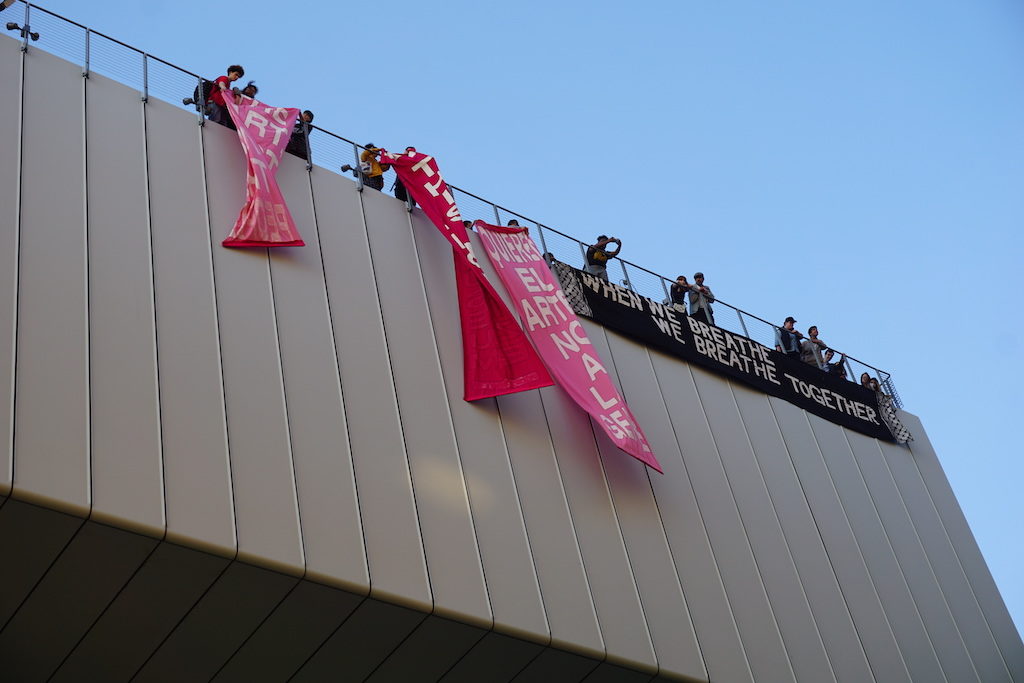 Protesters at a Decolonize This Place action unfurling banners at the Whitney Museum in New York on May 17, 2019.

Protests, actions, and art about Safariland have followed, with Decolonize This Place working with a spread of activist groups to stage protests in the Whitney’s lobby and its since-closed Andy Warhol retrospective. Biennial participants have also responded to the controversy—Forensic Architecture and Laura Poitras’s Praxis Films organization worked together to create a video about a new form of artificial intelligence that could eventually detect, based on images fed into it, when Safariland canisters have been used. Nicole Eisenman passed out anti-Kanders stickers, and Nicholas Galanin photographed a baby wearing a onesie with the slashed-through word “TEARGAS.”

Friday’s action was a riposte to the notion that the energy surrounding Decolonize This Place’s protests had flagged over the past eight weeks. This evening’s protest was among the most well-attended ones that Decolonize This Place has led at the Whitney to date, with more than 150 present, according to one activist involved with the group. The event included the unfurling of banners on the Whitney’s facade, chants in the museum’s lobby, and a march to Kanders’s residence on West 12th Street.

The proceedings kicked off in front of the museum as protesters laid out banners for picture-takers. In typical form for the Decolonize This Place protests, their concerns were numerous—protests aimed to draw attention to gentrification, colonialism, queer erasure, and conflict around the world, in places such as Palestine, Kashmir, and Puerto Rico. One sign read “Fuck de Blasio!,” in reference to the New York City mayor who announced his presidential campaign this week. Another read “RU HACKLEY SUPPORTS DTP”—a nod to Rujeko Hockley, one of two curators of the Whitney Biennial, who signed the open letter circulated by staff members at the Whitney. 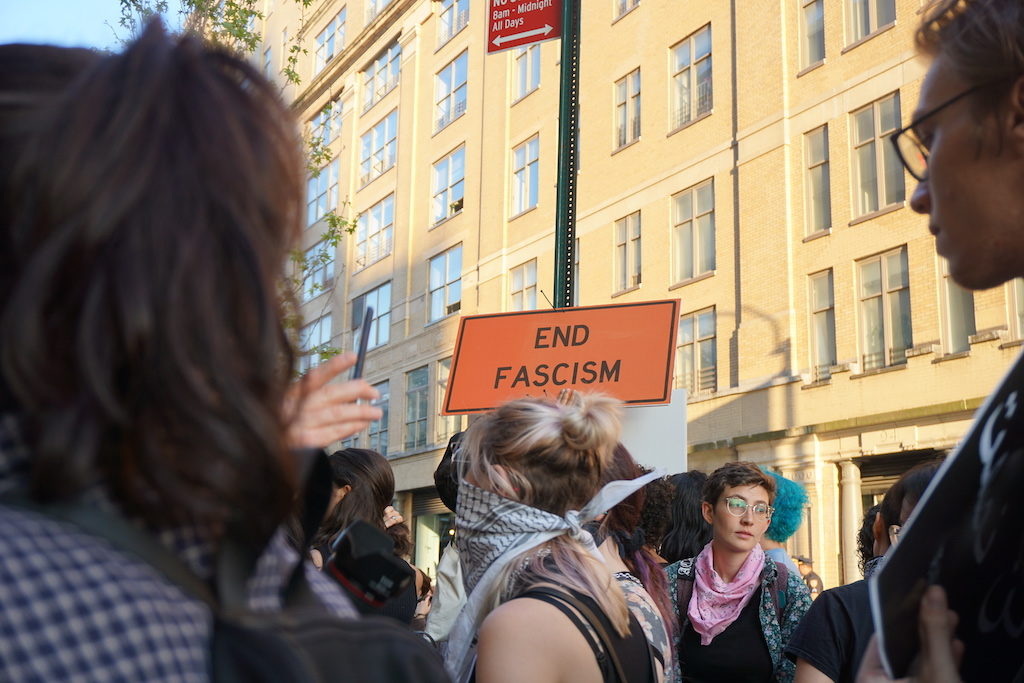 At least one Biennial participant was present in the opening hours—the Miami-based artist Eddie Arroyo, who has on view a series of paintings addressing gentrification in the city he calls home. Another was there in spirit: Nicole Eisenman, who designed a series of anti-Kanders stickers that were passed out to attendees.

At around 7 p.m., activists unfurled banners from the Whitney’s facade. The biggest one read: “WHEN WE BREATHE / WE BREATHE TOGETHER.” As the banners were unfurled from an outdoor area on the museum’s fifth floor, protesters cheered in support.

Activists then flooded into the museum’s lobby, where Amin Husain, one of the lead organizers at Decolonize This Place, addressed the crowd and reminded them of all the activist groups that had helped make the “Nine Weeks” series possible. Among them were P.A.I.N., a group that has protested museums receiving donations from the Sackler family, who has been accused of helping start the opioid crisis by producing the drug OxyContin, and Art Space Sanctuary, which has decried the Museum of Modern Art’s alleged involvement in mass incarceration in America.

Husain said that the activists had “no beef” with the Whitney Biennial artists. He deplored the condescension of white critics who have written on the Biennial, many of whom have said that the exhibition is not radical enough, and added, “White supremacy does not get to decide whether our work or actions are radical!”

Speaking of the participants in the exhibition, one demonstrator interjected, “They should all have boycotted, though!” 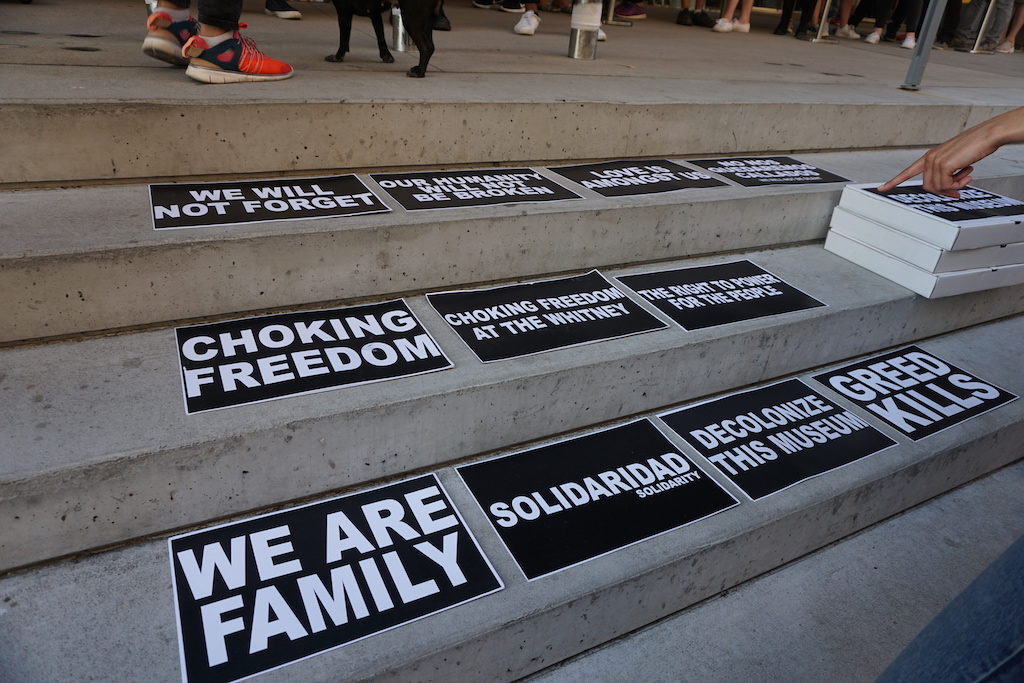 Signs at a Decolonize This Place action at the Whitney Museum in New York on May 17, 2019.

Among the speakers at the event were the lead organizers of Chinatown Art Brigade. Earlier in the day, the group had led a walking tour of downtown Manhattan in which they called on attendees to recognize the ways that the New Museum, the International Center of Photography, and the Museum of Chinese in America were allegedly involved the gentrification of Chinatown. One particular point of contention involved the presence of Jonathan Chu, a real-estate developer, who sits on the board of MOCA. Betty Yu, one of CAB’s lead organizers, said at the Whitney tonight, speaking of Asian-Americans gentrifying the neighborhood, “They look like us, but they don’t act like us.”

Speaking to the crowd at the Whitney, she said that Decolonize This Place’s activism encouraged her to speak out against MOCA. “This is what inspired us,” she said.

Nardeen Kiswani, a member of Within Our Lifetime, a pro-Palestine youth group, told the protesters, speaking of Kanders, “The extent of his war crimes is deeper than we probably know. He is a war criminal, make no mistake!” 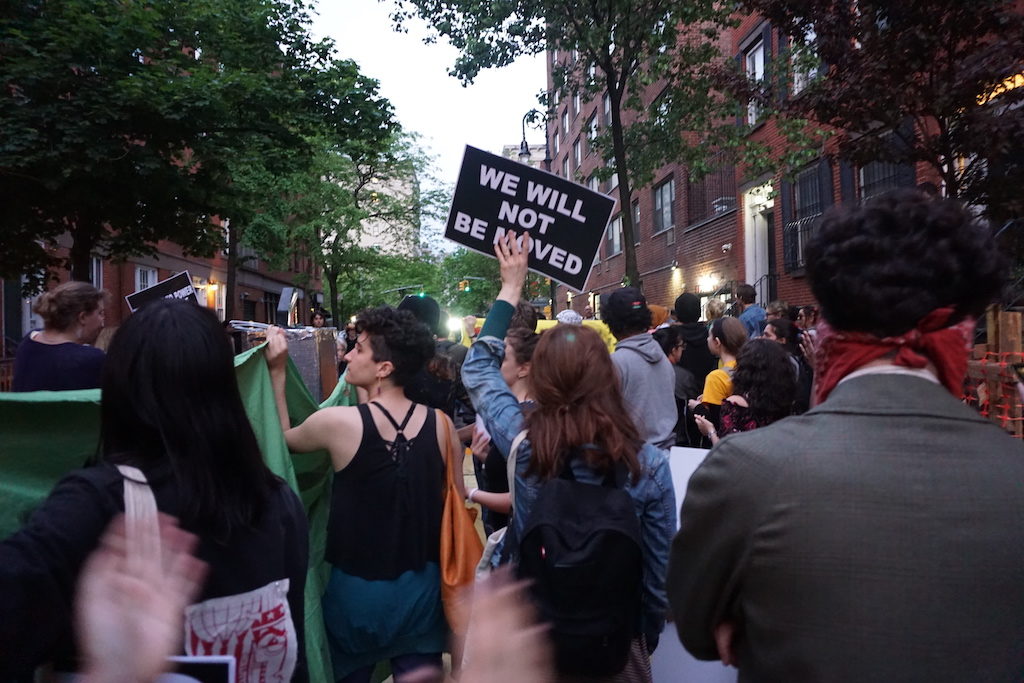 After these speakers, Natasha Singh, another member of Decolonize This Place, told the protesters to keep in mind the Whitney staff—even the janitors who cleaned up after their actions. “We had a party here for nine weeks,” she said, “so huge shoutout to them.”

Husain then told demonstrators that the group would lead a march to a location that would remain undisclosed. Minutes later, a stream of protesters flowed out to the museum and headed east. Diners at fancy restaurants stopped eating their dinners to watch as protesters walked down cobblestoned streets, and neighborhood residents watched as activists chanted anti-capitalist, anti–New York Police Department, and anti-Kanders statements.

At a certain point, while walking down West 12th Street, Decolonize This Place revealed where they protesters were headed: Kanders’s home. Shellyne Rodriguez exclaimed to the crowd, “The motherfucker lives on that block!”

Standing on Kanders’s doorstep, Husain laid out Decolonize This Place’s plan going forward: they have given the Whitney until the fall to remove Kanders from his post, or else the group will return to protest once more. Toward the end of the evening’s proceedings, around 9 p.m., one activist from the group told the crowd, “The people will not go away until you are removed from the Whitney.”

Another announced that they were leaving Kanders a present of sorts: a larger-than-life model of a Safariland tear gas canister. They told the crowd that it was now his mess to clean up.