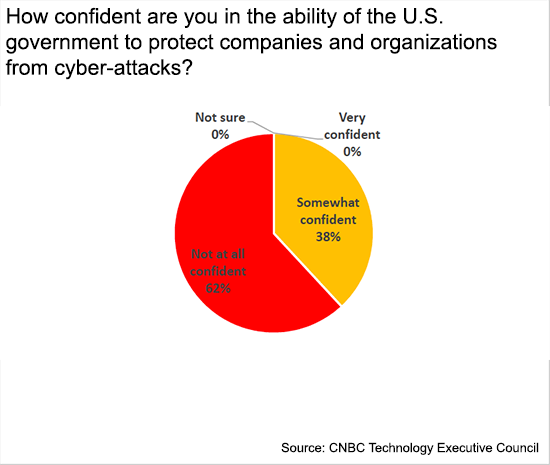 Cyberattacks are monitored at the U.S. Computer Emergency Readiness Team/National Cybersecurity and Communications Integration Center facility in Arlington, Virginia. But tech execs believe there is a disconnect on cybersecurity between the public and private sectors.

Technology executives don’t expect the government to help them if they’re hit by a cyberattack, according to a survey of 42 members of the CNBC Technology Executive Council. The study was conducted from May 31 to June 8, 2019.

Forty-five percent of the respondents said “defending against cyberattacks” was their single biggest risk in the next 12 months, making it their No. 1 worry.

They also see it as a worry they’ll have to face alone: 72% of those surveyed said they were “not at all confident” that the federal government was poised to help them protect their customers’ data, and 62% of respondents said they were not confident the U.S. government can help protect them against cyberattacks.

“It’s become widely accepted policy and practice that the private sector is on their own when it comes to defending against cyberattacks,” said Stephen Boyer, chief technology officer at BitSight, a cybersecurity product ratings firm.

Boyer said he was surprised that even 38% of those surveyed were “somewhat confident” in whether the government could help protect them against cyberattacks. “Given the government’s current relationship with the private sector, they really shouldn’t be,” he said. 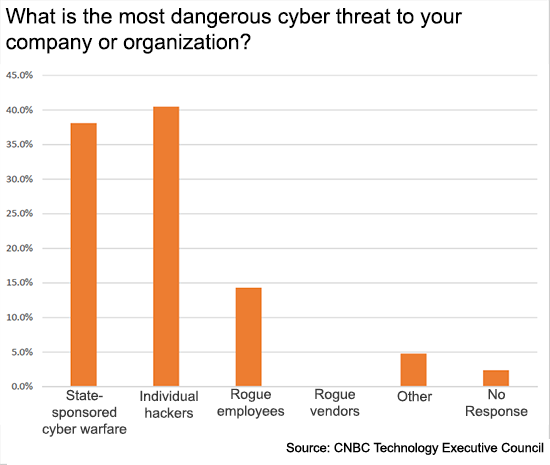 “Over the last few years, private companies have realized that they are mainly responsible for combating cyberattacks on their own and that government agencies do not provide reliable protections. That realization means the private sector is spending more time and effort protecting themselves and looking at how to make more informed risk decisions within their own organization instead of seeking help from government agencies,” said Boyer.

Boyer suggested more diplomacy and communication are needed in order to fix the disconnect on cybersecurity between the public and private sectors.

“If the goal is to build a more secure global ecosystem, that cannot just be a technology fix. It needs to be a global diplomacy commitment to try and create a more trusted ecosystem,” he said. “Just as stockpiling weapons doesn’t address all security concerns when it comes to nuclear warfare, we cannot just treat this as just a technology issue either. Diplomacy is key, and we have to be engaged globally on all fronts.”

Endgame’ faces as it seeks to dethrone ‘Avatar’