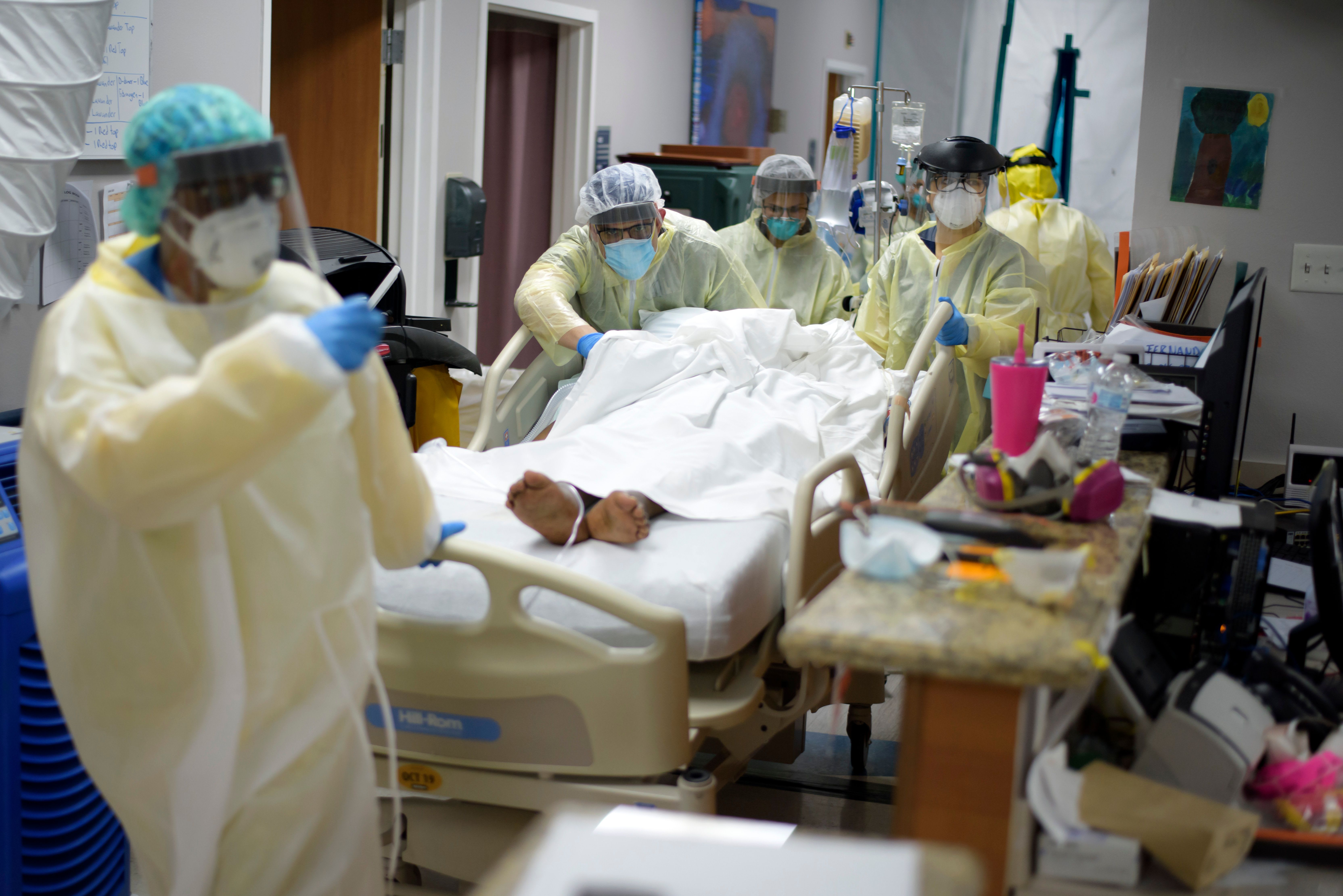 Healthcare workers move a patient in the Covid-19 Unit at United Memorial Medical Center in Houston, Texas Thursday, July 2, 2020.MARK FELIXHospitals in Houston, Texas are on track to be overwhelmed in approximately two weeks as coronavirus cases mount, Mayor Sylvester Turner said on Sunday.”The number of people who are getting sick and going to the hospitals has exponentially increased. The number of people in our ICU beds has exponentially increased,” Turner said on CBS’s “Face The Nation.” “In fact, if we don’t get our hands around this virus quickly, in about two weeks our hospital system could be in serious, serious trouble.”Texas hit a record number of new coronavirus cases on Saturday, reporting 8,258 people infected over 24 hours. Nearly 200,000 in the state have tested positive, according to data provided state health officials, including more than 35,000 in Harris County, which contains Houston. At least 2,608 people in the state have died of the disease. In Houston, the percentage of tests for the virus coming back positive has risen to nearly 25%. Turner said that people of color were being disproportionately impacted, particularly Hispanic residents. Turner, a Democrat, said that the main problem facing Houston hospitals is staffing, not a shortage of beds.”We can always provide additional beds, but we need the people, the nurses and everybody else, the medical professionals, to staff those beds. That’s the critical point right now,” Turner said. Daily new cases across the United States have risen sharply in recent weeks, threatening the nascent economic recovery. The virus has been spreading particularly rapidly throughout the Sun Belt, after hitting the Northeast earlier in the year.Houston is the fourth most populous city in the United States, with a population of about 2.3 million people, according to the Census Bureau.About 37 states, including Texas, are reporting increasing daily case numbers. While the number of new cases has risen sharply, it remains unclear what the mortality rate will be from the new infections, with health officials in many states reporting that younger individuals are making up a greater proportion of those falling ill.Turner called Covid-19 “an equal opportunity abuser” and said in Houston “it’s anyone from their 20s into their 90s being impacted.””If you come together in close proximity you will fuel this virus,” he said. Texas Gov. Greg Abbott, a Republican, paused the state’s reopening last month as infections surged, ordering bars to close and restaurants to limit capacity.On Thursday, Abbott issued an order mandating face coverings in public spaces and allowing local officials to impose restrictions on gatherings of more than 10 people. “We have the ability to keep businesses open and move our economy forward so that Texans can continue to earn a paycheck, but it requires each of us to do our part to protect one another — and that means wearing a face-covering in public spaces,” Abbott said at the time.