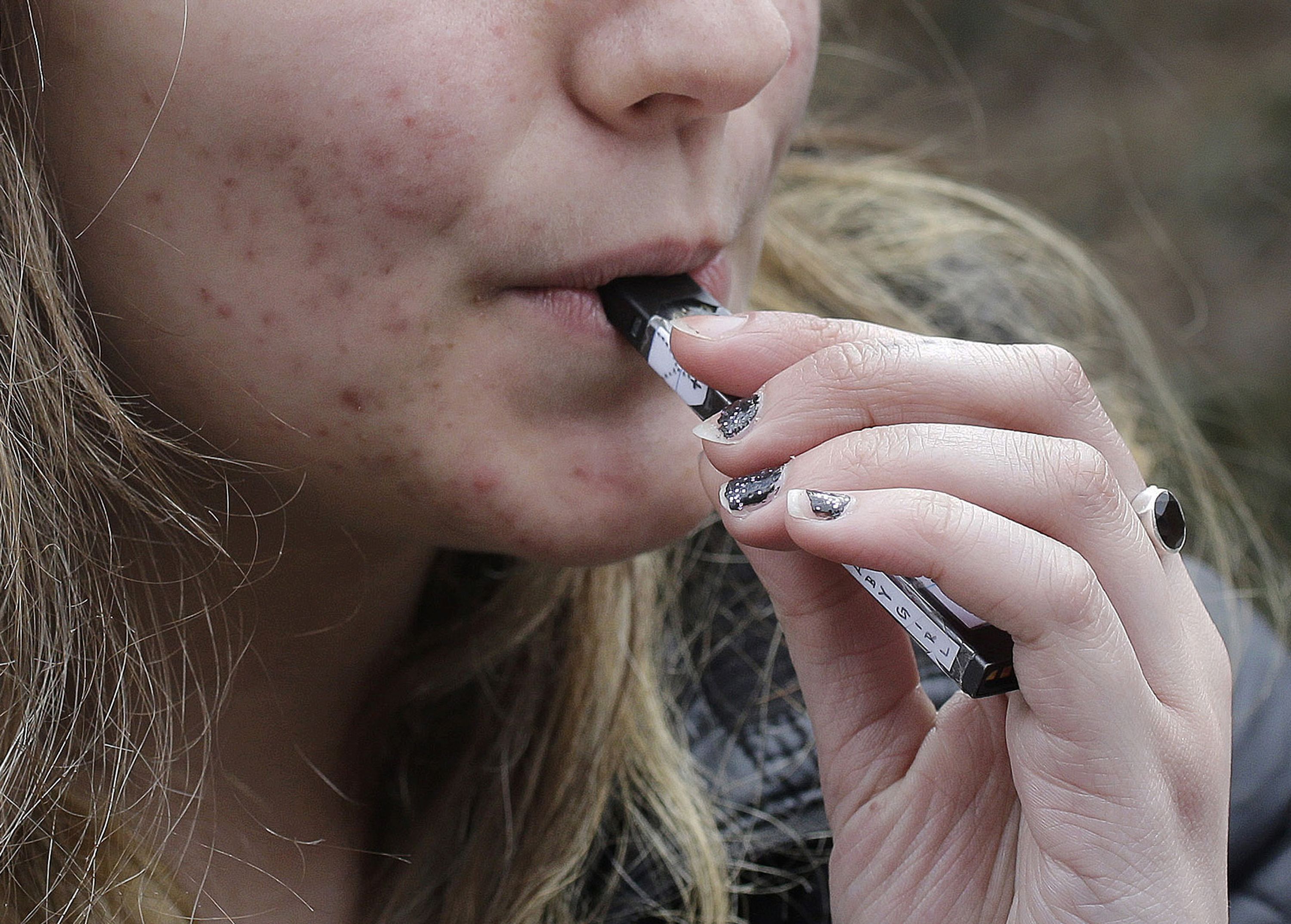 In this April 11, 2018, file photo, a high school student uses a vaping device near a school campus.

The use of e-cigarettes and other vape products by young people is growing at a rapid rate. It is an important public health concern and meaningful reform is needed to address the problem.

The Food and Drug Administration has proposed policy changes and guidance to deal with these concerns. The FDA’s attention to these issues is commendable.

The only problem is: the FDA’s proposed policy cuts against what is known about young people getting e-cigarettes. The proposal is counter-productive; it will make youth e-cigarette use and addiction worse, not better.

The FDA proposed that the flavored e-cigarettes it targets should only be sold in adult-only stores like vape shops and tobacco stores or on the internet. The flawed assumption central to FDA’s proposal is that young people primarily get e-cigarettes from convenience stores — where minors are allowed and most e-cigarettes are sold. That may have some superficial appeal. But research shows that’s just not true.

According to an August 2018 study “How Do Adolescents Get Their E-Cigarettes and Other Electronic Vaping Devices?” published in the American Journal of Health Promotion, minors get most of their e-cigarettes from adults who are old enough to buy them. While first obtained by adults, the e-cigarettes are resold or given to minors, according to the study, which was cited by the FDA in its policy proposal. More than half of the minors who use e-cigarettes get them this way. In fact, the study showed that only 31.1% of minors who obtained e-cigarettes bought them from a retailer.

The counterproductive nature of the FDA’s policy becomes clear when examining the data on those retail sales. Almost a third of minors who buy e-cigarettes from a retailer purchased them online, 22.3% bought them in vape shops and 16.4% purchased them in tobacco stores. Altogether, those three types of outlets account for nearly 70% of the retail purchases of e-cigarettes by minors.

Parents are a problem

The data on the outlets the FDA proposes to stop from selling flavored products makes the agency’s proposal even more confusing. The same study showed that only 5.6% of minors who bought e-cigarettes at a retail location purchased them in convenience stores, accounting for less than 2% of all retail sales to minors. In all, vape and tobacco stores sell about 20 times as many e-cigarettes to minors as convenience stores — even though convenience stores outnumber them by 15 to 1. The FDA’s proposal clearly is not focused on where the problem is.

The government’s numbers confirm this picture. Studies of youth e-cigarette use by both the CDC and the FDA indicate that 86% of minors who use e-cigarettes do not get them from any store. Of those that do get them from a store, 76% of them get the products from vape shops. To put things in perspective, parents are giving twice as many e-cigarettes to their underage kids than those sold to minors in convenience stores.

All this shows the FDA headed in the wrong direction. To keep e-cigarettes out of the hands of minors requires a multi-faceted, even-handed approach. To target one disfavored retail channel will leave large holes in our policy. Holes that kids who want e-cigarettes will gladly exploit. Further, the FDA’s proposal sets a dangerous precedent of a regulator picking economic winners and losers in the marketplace. The government should not do that, especially when it has no public health justification in the data for its decision.

To make a positive difference, the FDA should actively enforce the law against sales to minors. Based on the data, enforcement should be focused on digital sales, vape shops and tobacco stores first — precisely the locations where kids would be pushed under FDA’s proposed policy.

I am grateful that the Senate is taking action to address online sales of e-cigarettes. Last week, Senators Dianne Feinstein (D-CA) and John Cornyn (R-TX) introduced legislation that will update the Prevent All Cigarette Trafficking Act (PACT) to include e-cigarettes and require an ID check upon delivery of these products. Hopefully, Senate Majority Leader Mitch McConnell will support this legislation and make sure it passes the Senate quickly.

The bottom line is that the FDA’s policy needs to be dramatically changed. If it isn’t, then the data shows clearly that youth e-cigarette use will increase because of, not in spite of, the FDA’s actions.

Henry O. Armour is the President and CEO of the National Association of Convenience Stores.