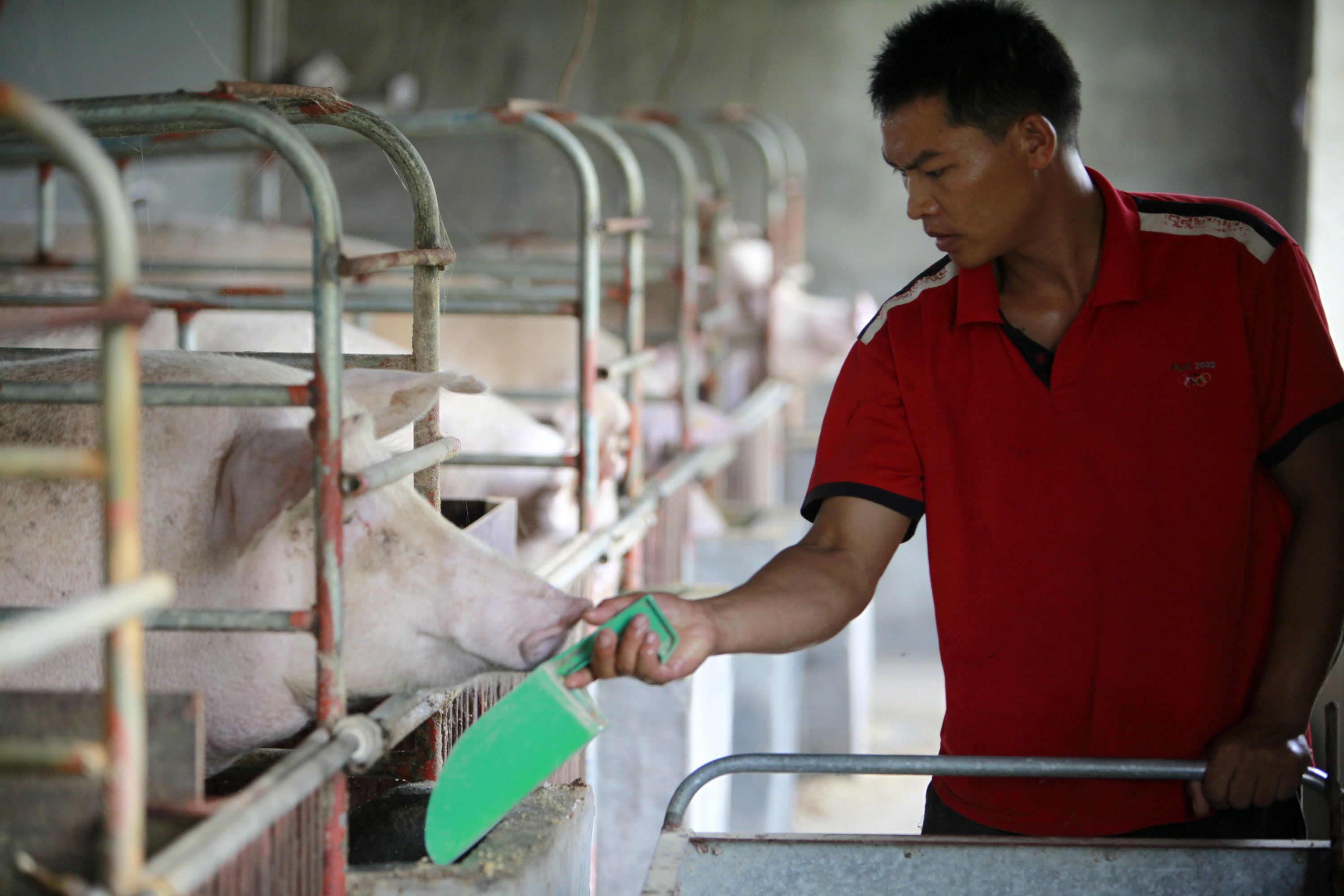 A hired hand feeds a sow which recently gave birth to a new litter at the Grand Canal Pig Farm in Jiaxing, in China’s Zhejiang province.

Soybean demand in China appears to be surprisingly robust despite the widespread culling of pigs due to African swine fever.

That may be indicating that farmers are switching from food waste to manufactured feed, according to one analyst, which could mean better-than-expected demand will persist.

The Chinese use of soybeans is an important metric for the country’s trade relationships. Since China is the world’s top buyer of the oilseeds, it could give some support to American exports as shipments for the current marketing year may be on pace to top U.S. government forecasts, a recent Reuters analysis showed.

China’s sustained demand for soybeans has been called into question not just by trade war tensions but also by a raging outbreak of African swine fever, which has forced farmers to cull a significant percentage of their pigs.

Nevertheless, China’s need for the feed material seems to be defying expectations.

“The soybean crushing rate and soybean demand is down compared to last year at this time, but is still surprisingly strong given how many hogs China has lost,” said Darin Friedrichs, senior Asia commodity analyst at INTL FCStone.

“If China loses about 40% or more of their hogs, we would normally assume soybean demand would be down a large amount as well. At this point it’s maybe only down 5-10% or so which is surprising,” Friedrichs told CNBC.

However, China-based firms such as Cofeed are estimating year-to-date figures for certain soybean processing fell just 3.6% from a year ago, Friedrichs said.

Analysts have been struggling to assess the severity of the virus on China’s pig herds. Dutch agribusiness lender Rabobank said in a June report that losses in pig herd are “difficult to estimate” and could be anywhere from 20% to 70%.

China, which produces half the world’s pork, said in June its sow herd declined by a record 23.9% in May from a year ago, a slightly deeper drop than for the overall pig herd, Reuters reported. The government’s figures have, according to Rabobank, represented “one of the most optimistic estimates we have seen.”

The decline in pork supply in China has pushed up prices of food in the country and spurred consumers to eat other proteins such as chicken or seafood.

However, alternative meat sources such as poultry or seafood do not consume as much feed as pigs, said Friedrichs.

“Even if every pound of pork lost was exactly replaced by one pound of poultry, the overall soybean demand would be lower,” Friedrichs added in his report.

So, “perhaps this all comes down to the question of how much food waste was being fed to hogs,” Friedrichs said.

China has blamed the use of food waste as animal feed for the spread of swine fever and has banned the practice in provinces that have reported outbreaks, according to Reuters.

“If pig farmers are now switching to proper corn and soybean meal feed when they are restocking their herds it would be supportive of meal demand,” said Friedrichs.

Last Thursday, Yu said pig production is gradually returning to normal. The official added that China has had fewer outbreaks this year than last, with only 44 cases in the first six months of 2019.

In May, the U.S. shipped 2.56 million metric tons of soybeans, down 18% from the same month last year but still the second-highest May volume on record. September-through-May shipments totaled 35.8 million tonnes, down 26% on the year and the smallest volume for the period in six years, according to Reuters.

Some 50% or 1.28 million metric tons of the May soybean shipments were to China, the largest monthly share since January 2018.

The U.S. Department of Agriculture has forecast exports this year to be 20% from a year ago.