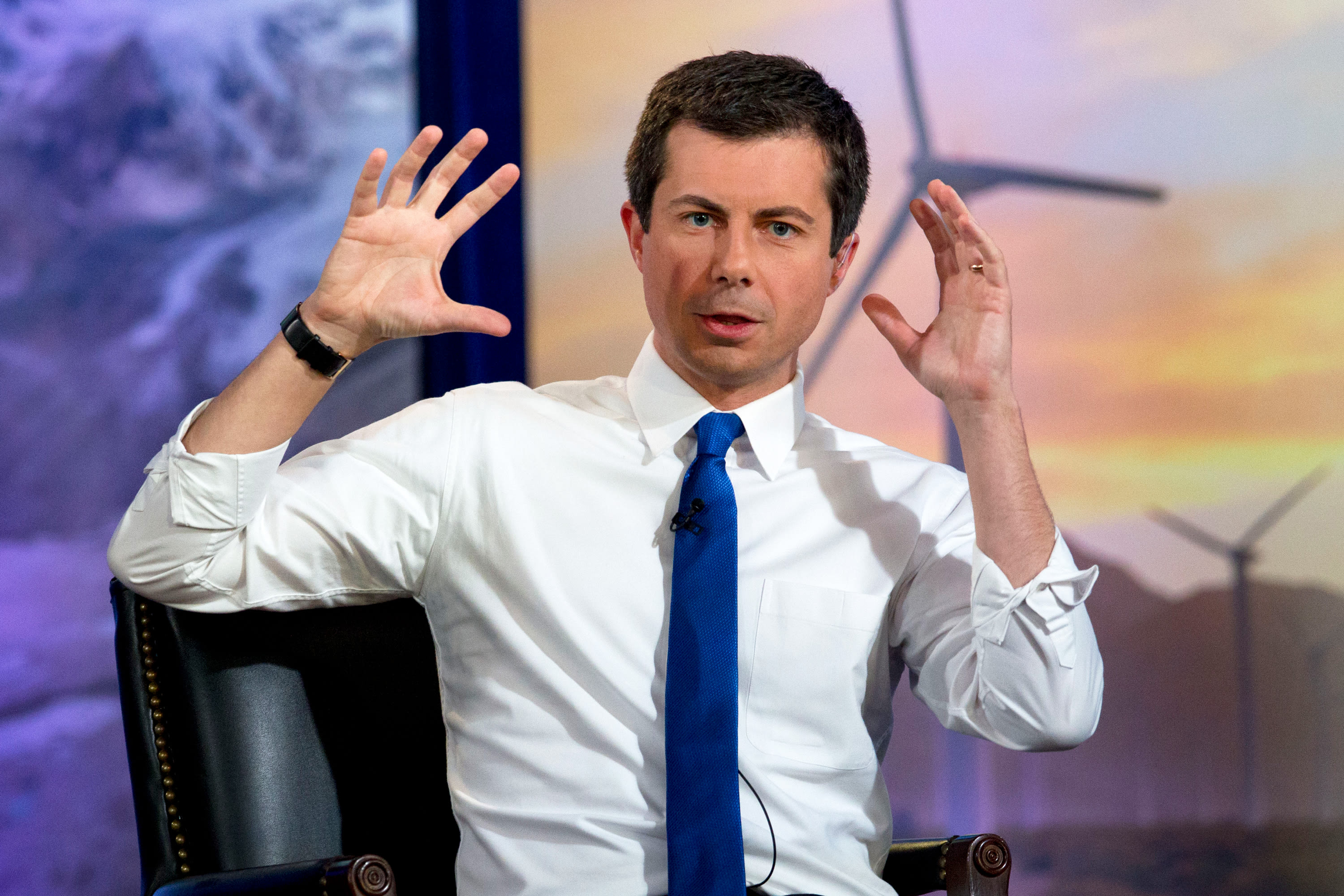 Democratic presidential candidate and South Bend Mayor Pete Buttigieg speaks during the Climate Forum at Georgetown University, Friday, Sept. 20, 2019, in Washington.Jose Luis Magana | APWASHINGTON, DC — Several Democratic candidates this week emphasized plans to take aggressive action on climate change during MSNBC’s two-day climate forum at Georgetown University, vowing to funnel trillions of dollars towards renewable energy and impose a carbon tax on corporations.The MSNBC forum is the second major climate-focused discussion with some of the 2020 candidates this month, following a seven-hour CNN town hall in September. Placing a tax or fee on carbon dioxide pollution has long been a controversial proposal, but it’s recently come to the forefront of discussions of candidate’s climate proposals.Carbon pricing has drawn intense opposition in Washington by those who argue that it’s essentially an energy tax that would make energy bills, gas and flying more expensive.Such proposals also come under attack from President Donald Trump and Republicans who have repealed or rolled back a slew of Obama-era rules aimed at mitigating climate change, including regulations on clean water, methane emissions, light-bulbs and oil and gas drilling.However, economists have argued that raising the cost of burning fossil fuels like coal, oil and gas can be the best way to cut emissions, and that the government could return all the revenue raised from the tax directly to consumers through rebates. That way, the majority of Americans receive more in carbon dividends than they pay in increased energy prices.Tech executive Andrew Yang’s climate plan includes a carbon tax that would initially tax carbon dioxide at $40 per ton and then raise the price to $100 per ton, with half of the revenue from the tax going into his universal basic income proposal and the other half into investments in clean energy.”Companies can be trusted to do the right thing for their bottom line. That’s the only thing they can be trusted for. They have a singular incentive,” Yang said at the climate forum on Thursday. “Large companies have to measure their emissions, pay a carbon tax and take into account their impact on people beside their shareholders.””If you want companies to move in the right direction on climate change, you have to hit them where it hurts — in their wallet,” Yang said.On Friday, South Bend Mayor Pete Buttigieg repeated his support for a carbon tax at the climate forum. “I think we need to make sure that the entire economy is trending towards climate justice and climate action,” he said.The mayor had previously voiced his support for a tax, saying earlier in the month at the CNN town hall: “I know that you’re not supposed use the T-word in politics.”Democratic presidential candidate entrepreneur Andrew Yang speaks during the Climate Forum at Georgetown University, Thursday, Sept. 19, 2019, in Washington.Jose Luis Magana | APVermont Sen. Bernie Sanders, an early proponent of a carbon tax, said at the forum that his $16.3 trillion plan to fight climate change — the most expensive proposal yet among candidates — would convert the electricity and transportation sectors to 100% renewable energy by 2030 and decarbonize the economy by 2050. His current plan doesn’t explicitly call for a tax.Sanders said Thursday he would look into pursuing criminal charges against fossil fuel company executives “who knew they were destroying the planet.””What do you do with an industry who for years has spent tens of millions of dollars in phony think tanks telling people the evidence is not clear whether climate change is real or not?” Sanders said. “They knew it was real.””We will hold them accountable,” he added.Other candidates who say they would support a carbon tax include Massachusetts Sen. Elizabeth Warren; former Vice President Joe Biden; Sen. Amy Klobuchar of Minnesota; former housing secretary Julian Castro; and California Sen. Kamala Harris.Former Texas congressman Beto O’Rourke has called for a cap-and-trade method on pricing carbon, a system in which the government issues a certain number of permits to carbon emitting pollutants, which creates a cap on emissions.The idea of a carbon tax has been slowly spreading around the globe during the past couple decades. More than 40 governments worldwide have adopted some form carbon pricing, whether it be a direct tax on emissions or a cap-and-trade program.Canada, for instance, has the most ambitious carbon pricing program, with a nationwide tax on fossil fuels that starts at $15 per ton of carbon dioxide this year and will rise to $38 per ton by 2022.In the U.S., carbon pricing efforts have occurred at the state level. Nine states have set a cap on emissions from the power sector through auctioning off carbon pollutant permits to companies.Though there is no one clear figure on how much it would cost to decarbonize the U.S. economy, one study suggests that $4.5 trillion would be needed to transition to a 100% renewable U.S. power grid.The 2020 Democrats’ plans range in cost from $1.7 trillion to $16.3 trillion. Some of the sweeping climate proposals from the candidates would likely face an uphill battle against Congress.Both MSNBC’s and CNN’s separate climate forums follow the Democratic National Committee’s decision not to hold a presidential primary debate dedicated to climate change, which was met with scrutiny among some voters and candidates.

Over 600 US companies urge Trump to resolve trade dispute with China: Letter

Why is Apple so vulnerable to a trade war with China?

Tesla, Ford have most to lose among US automakers on China’s new tariffs