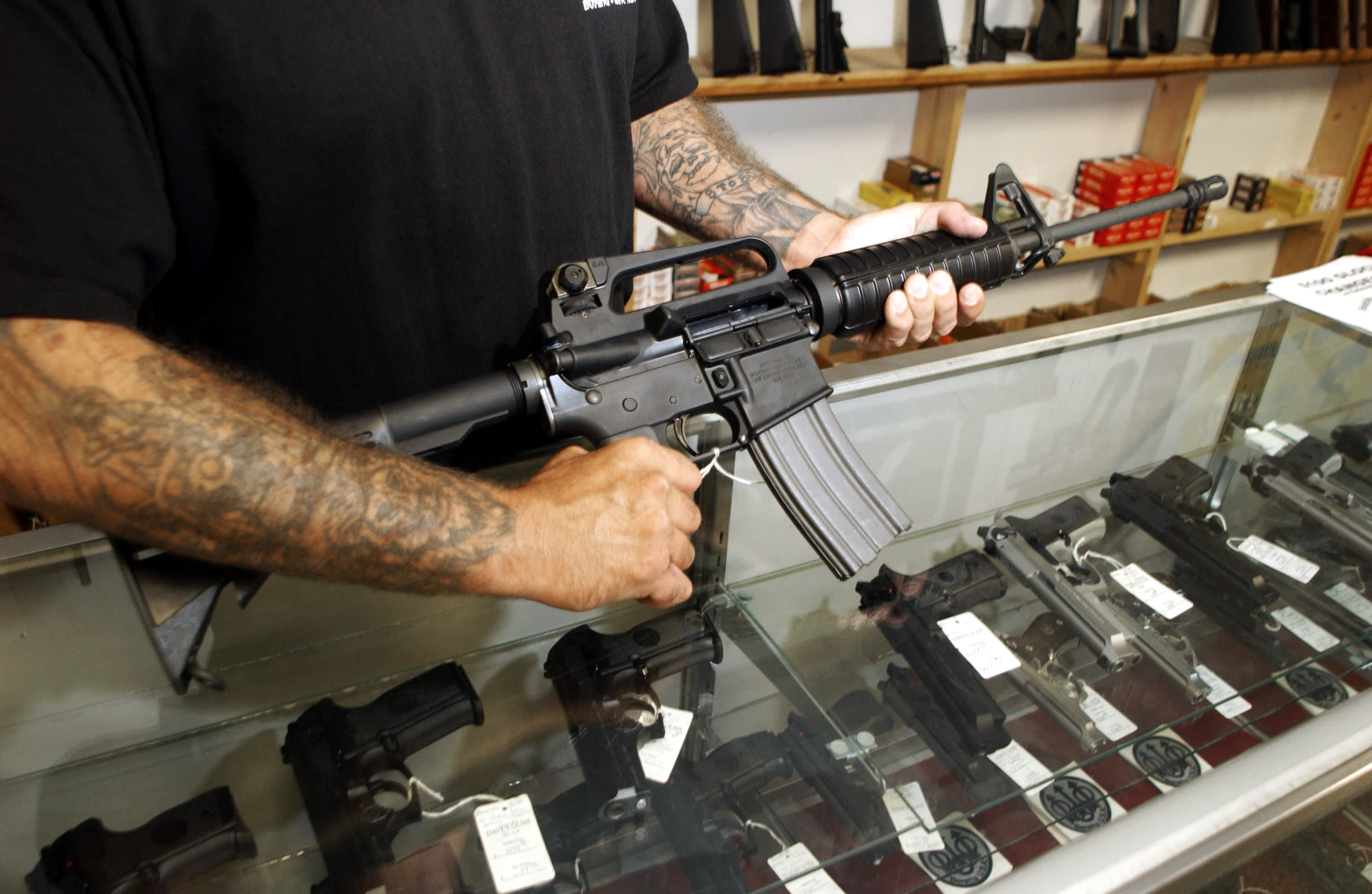 An employee of Dave’s Guns holds a Colt AR-15.Thomas Cooper | Getty ImagesColt announced that it will halt its production of AR-15 rifles for civilian sales on Thursday, but the news might not be as exciting for gun control advocates as it first appears.The rifle continues to be one of the most popular weapons on the market today, and there are many other manufacturers customers can turn to, said Mark Oliva, director of public affairs at the National Shooting Sports Foundation.”The AR-15 market is very crowded and very competitive,” Oliva said. “There are also a lot of people who are making AR-15s on small scale.”The foundation estimates that there are about 16 million AR-15s in civilians’ hands today.CJ Calesa, the manager at a gun store in Alabama called Southeastern Guns, said Colt’s decision will hardly make a difference for the industry.”Colt’s a small market of AR-15s,” Calesa said. “There are so many companies out there producing just as [good] quality or better quality ARs for the same price or cheaper.”He said people who are well-versed in the world of AR-15s are going to know that there are other options out there. In his shop alone, he sells the gun from about 30 different manufacturers.Colt said its decision to stop selling the gun to civilians was driven by the market.”The fact of the matter is that over the last few years, the market for modern sporting rifles has experienced significant excess manufacturing capacity. Given this level of manufacturing capacity, we believe there is adequate supply for modern sporting rifles for the foreseeable future,” President and CEO of Colt Dennis Veilleux said in a statement Thursday.While sales of the rifle usually go up after mass shootings because policymakers say they will consider greater restrictions, that hasn’t been the case under the Trump administration, said Timothy Lytton, an associate dean at Georgia State University and author of the book “Suing the Gun Industry.””If we see a new administration, that is likely to advance an agenda that includes further gun control measures … you’re likely to see a spike in the demand,” Lytton said.Recently, commercial retailers have reacted to social pressure from gun control activists. Walmart said earlier this month it will discontinue all sales of handgun ammunition and sales of short-barrel rifle ammunition that can be used with military-style weapons. The company also, along with Kroger, is asking shoppers to refrain from openly carrying guns in its stores. In February 2018, Dick’s Sporting Goods voluntarily pulled assault-style weapons out of its stores and stopped the sale of firearms to anyone under 21 years old. The announcement came in the wake of the school shooting in Parkland, Florida. Then, earlier this year, it doubled down and stopped selling all guns, including hunting rifles. Major companies in the gun industry rarely respond to the social pressure on gun control, Lytton said. They often fear backlash from the gun rights community. But whether they like it or not, gun ownership has become political.”The increasing polarization about this issue has placed the gun industry in a sort of partisan camp, and every industry wants to stay bipartisan,” Lytton said.While Colt insisted its decision was market-driven, the choice has some wondering if controversy around guns nudged them a certain way.”With the timing, it makes you scratch your head and wonder if they’re not serving the political winds around this issue,” said Andrew Patrick, director of political communications at the Coalition to Stop Gun Violence.Colt was unavailable for comment.As far as what the company’s decision means for gun control, Patrick isn’t sure.”Colt has a name associated with it and there is a history around Colt’s firearms so I think there is a symbolism there,” Patrick said. “Will it start a trend? I’m skeptical but it’s progress. There will be one less AR manufacturer, and that’s always a good thing.”

No ‘Friends,’ ‘The Office’ means Netflix can spend more on own shows