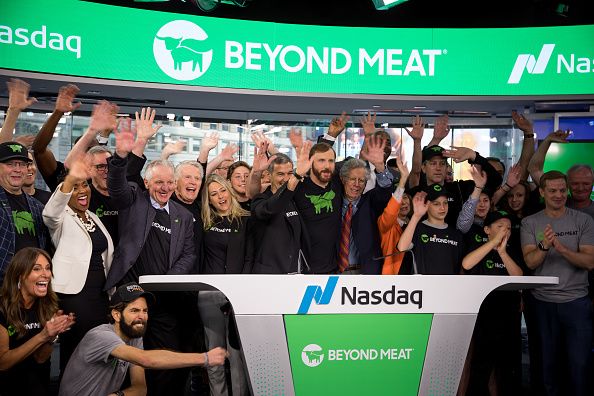 Ethan Brown, founder and chief executive officer of Beyond Meat Inc., center, rings the opening bell during the company’s initial public offering (IPO) at the Nasdaq MarketSite in New York, U.S., on Thursday, May 2, 2019.

Beyond Meat’s stock continues to skyrocket and even the most optimistic Wall Street analysts are lagging far behind.

Shares of the alternative meat company have risen more than 600% since its initial public offering of $25 a share, hitting a high of $186.43 a share in trading on Monday. (It has since come back from that level and was last at $166.20, still up 20% for the day.) Beyond Meat reported first-quarter results on Thursday that were stronger than expected, telling investors that it expects revenues to more than double over the next year.

There are eight Wall Street firms covering Beyond Meat’s stock and, after the company’s earnings, five of them raised their price targets.

But even the highest price target – Credit Suisse at $125 a share – was immediately outpaced when Beyond Meat’s stock began trading on Monday. Beyond Meat shares soared toward its third best day of trading ever, climbing more than 25% at one point.

Beyond Meat “issued revenue guidance for 2019 that exceeded our estimate by 11% due to distribution gains and velocity growth,” Credit Suisse analyst Robert Moskow told investors on Friday. His firm’s price target nearly doubled, as Credit Suisse raised it from $70 a share to $125 a share.

“At some point, the extraordinary revenue and profit potential embedded in [Beyond Meat] will be priced in,” J.P. Morgan analyst Ken Goldman told investors on Friday. Goldman’s forecast is $120.

Here is the full list of analysts covering Beyond Meat’s stock and their price targets in descending order:

— With reporting by Michael Bloom