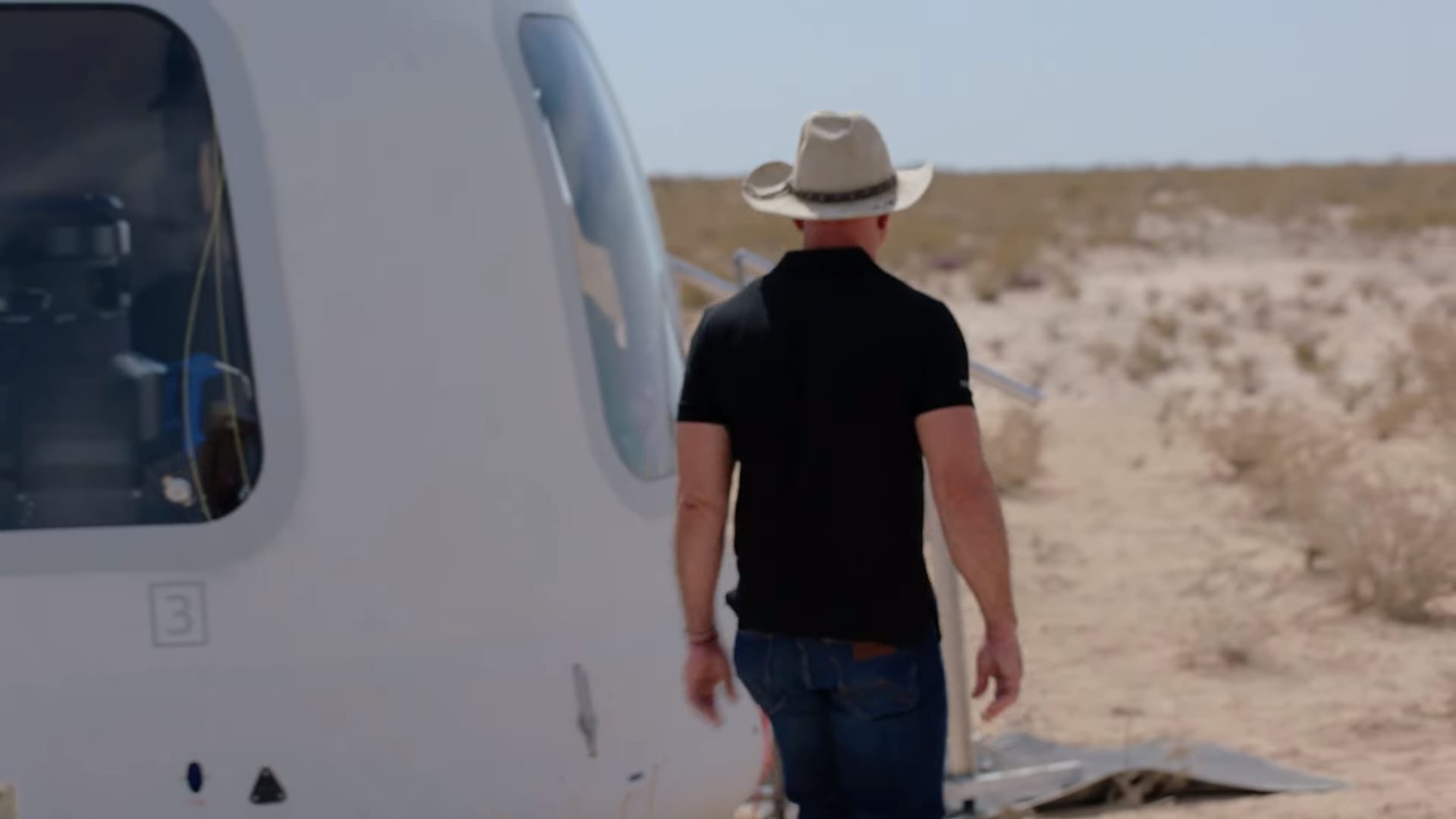 Jeff Bezos walks out to where the New Shepard capsule landed in the Texas desert after a test flight in April 2021.Blue OriginJeff Bezos’ space venture Blue Origin on Thursday revealed that 18-year-old Oliver Daemen will fly in place of the still anonymous $28 million winning bidder of last month’s public auction.Daemen will fly to the edge of space with the Amazon founder, his brother Mark Bezos, and legendary aerospace pioneer Wally Funk on Blue Origin’s New Shepard rocket scheduled to launch on July 20.The young physics student takes the place of the auction winner, who Blue Origin said could not fly on the mission “due to scheduling conflicts.” Blue Origin said the auction winner “has chosen to fly on a future New Shepard mission.”Blue Origin described Daemen as the “first paying customer” flying on New Shepard, with a spokesperson telling CNBC that “he was a participant in the auction and had secured a seat on the second flight.””We moved him up when this seat on the first flight became available,” Blue Origin said.The company confirmed that Daemen is the son of Somerset Capital Partners CEO Joes Daemen, who paid for the seat and chose to fly Oliver instead. Somerset is a Dutch private equity firm based in Oisterwijk that Joes Daemen founded.At 18, Daemen would be the youngest person to fly to space, with Funk, 82, also set to become the oldest person to become an astronaut.The spaceflightA New Shepard rockets launches the NS-10 test flight on January 23, 2019.Blue OriginNew Shepard, a rocket that carries a capsule to an altitude of over 340,000 feet, has flown more than a dozen successful test flights without passengers, including one in April at the company’s facility in the Texas desert. It’s designed to carry up to six people and flies autonomously — without needing a pilot. The capsule has massive windows to give passengers a view of the earth below during about three minutes in zero gravity, before returning to Earth.Blue Origin’s system launches vertically, and both the rocket and capsule are reusable. The boosters land on a concrete pad at the company’s facility in Van Horn, Texas, while the capsules land using a set of parachutes.Bezos founded Blue Origin in 2000 and owns the company, funding it through share sales of his Amazon stock.July 20 is notable because it also marks the 52nd anniversary of the Apollo 11 moon landing.Become a smarter investor with CNBC Pro.Get stock picks, analyst calls, exclusive interviews and access to CNBC TV. Sign up to start a free trial today.