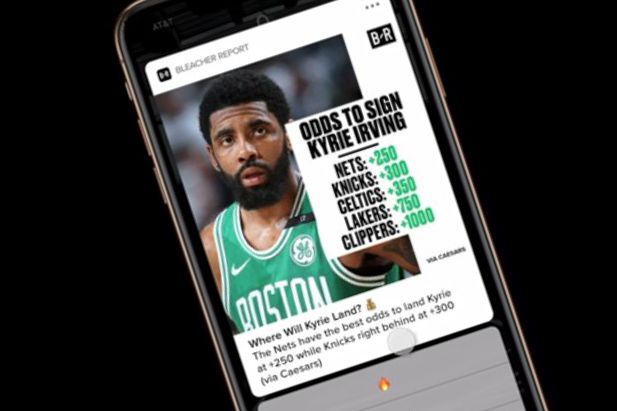 Sports gambling is about to get a big boost from the Bleacher.

A year after the Supreme Court paved the way for states to allow betting on sports, traditional media companies have tried to integrate odds and other gambling content. One youth-focused company in particular is going after this space: Bleacher Report.

Considered a top online sports destination for millennial and Generation Z sports fans, Bleacher Report has gone all in, quickly adding sports gambling to its digital platforms and expanding its footprint in the space. In February, the company announced a deal with Caesars to develop sports-betting studio shows inside one of its Las Vegas casinos.

The gaming-related programming will start later this summer and is expected to reach the 250 million people who access Bleacher Report across social media.

“We are commingling the data we have about usage, experience and what consumers want with Caesars data, which is some of the most powerful and cumulative data in the world for sports betting,” said Bleacher Report Chief Executive Howard Mittman.

May 14 marks one year since the Supreme Court opened the door for states to legalize sports gambling. The nation now has eight states with legal sports betting, and that number will continue to grow. Leagues and teams have formed partnerships with sports books, while traditional media has pivoted to providing new gambling content. It’s resulted in countless more fans placing wagers on their favorite sporting events.

As sports gambling has become more widespread, it’s finding a generation willing to overlook its seedy past. A recent Bleacher Report study found that nearly 2 in 3 sports fans ages 21-34 find it socially acceptable. More importantly, it drastically increases engagement, with bettors being five times more engaged on the site than non-bettors.

“I think younger consumers relate to the gamification of all things — not just Fortnite, EA Sports and Madden, ” Mittman said. “If you look at Las Vegas, younger consumers don’t use slot machines, they are more apt to bet on sports.”

According to the company, Bleacher Report’s sports betting category has grown three times faster than any other category. Bleacher Report is a unit of AT&T’s WarnerMedia division, and that has helped it be aggressive and leverage the larger company’s platform and data, Mittman said.

“Because we have an app that has almost 20 million downloads, 9.5 million consumers receiving alerts from us anywhere from 5 to 20 times per day, we sit on a lot of first-party data,” Mittman said. “We understand what consumers are doing. We like to think of the app as the heartbeat of the American sports fan.”