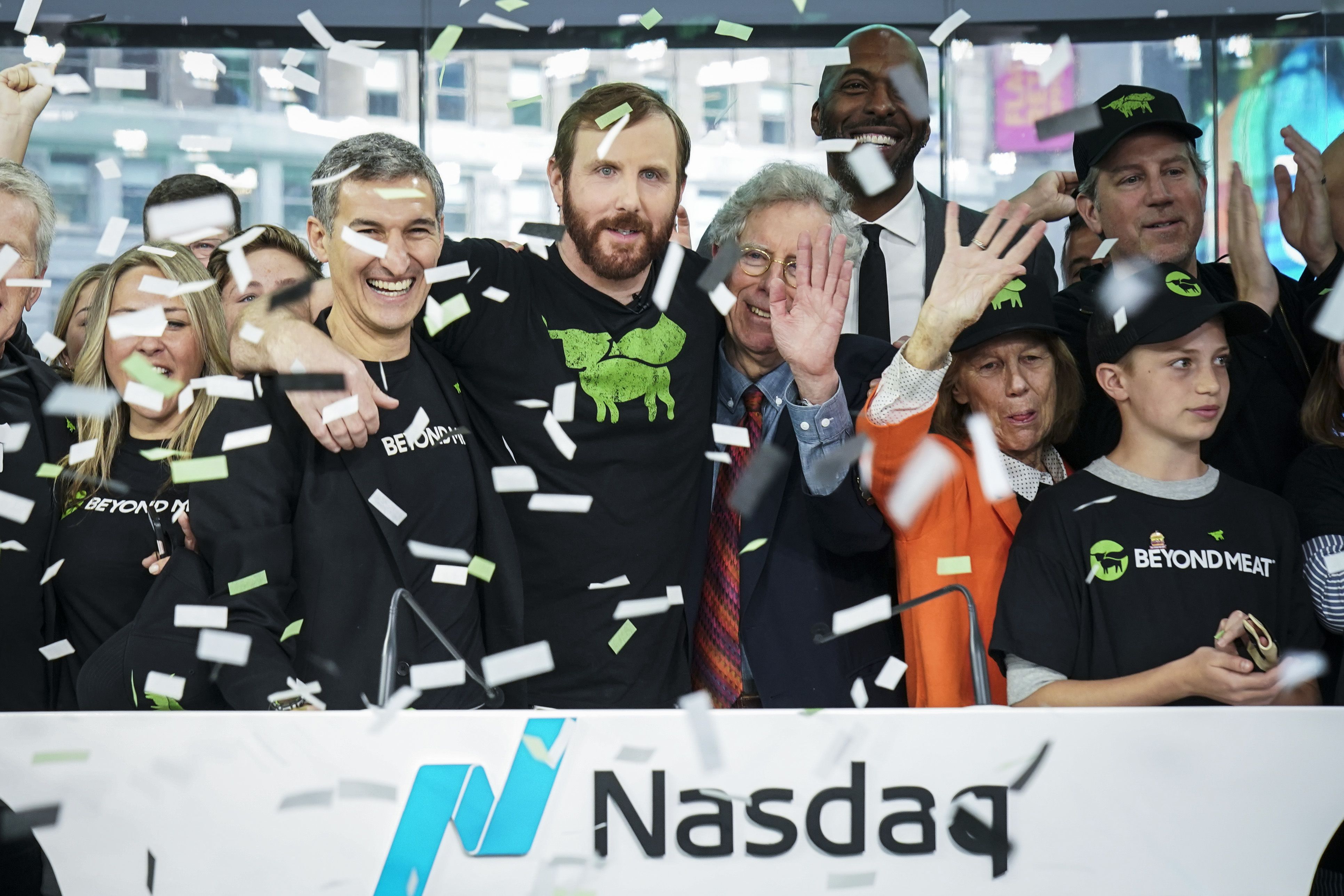 Beyond Meat CEO Ethan Brown (C) celebrates with guests after ringing the opening bell at Nasdaq MarketSite, May 2, 2019 in New York City.

For investors looking to understand what’s next for Beyond Meat, it might be wise to take a look at bitcoin.

In May, the maker of meat alternatives set its initial public offering price at $25 per share. Since then, the stock has surged 794% and hit a record high of $239.71 last week. The shares have climbed too high for any Wall Street analysts to recommend buying the stock.

Beyond’s stock fell 4% in morning trading ahead of its earnings report after the bell Monday.

Bitcoin, which is known for its volatility, is up 79% since May 2, the day Beyond made its public market debut. The cryptocurrency nearly hit $20,000 in December 2017, fueled by a speculative bubble as it gained attention from mainstream media and retail investors, but its value has been cut in half since then. That dramatic plunge means some investors were burned as bitcoin’s fortunes turned.

Short sellers are trying to cash in by betting that Beyond’s stock will experience a similar drop. Short sellers borrow a stock with the expectation that its price will fall and the investor can repurchase it at a profit. Nearly 44% of Beyond’s outstanding shares are being shorted, according to data from S3 Partners.

“It’s captured the imagination of every amateur shortseller out there,” Andrew Left of Citron Research said.

Left, one of Wall Street’s most prominent short sellers, said that his firm covered the float on its short bet on Beyond. Covering the float involves purchasing the same amount of shares that an investor has shorted in order to offset losses if the share price jumps even more.

Friday’s rally resulted in $66.5 million in losses for short sellers, according to S3 Partners. So far in July, they are down $427.8 million.

“This has nothing to do with the company, but it’s not taking away from the company,” Left said. “They’re not doing anything wrong.”

For now, Beyond is the only publicly traded company that specializes in making products that replicate the consistency and taste of meat. Its main rival Impossible Foods, which has deals with Little Caesars and Burger King, remains privately held. Beyond will also soon be facing competition from traditional food companies like Nestle and Tyson Foods, which are wading into the world of plant-based meats.

Analysts surveyed by Refinitiv are expecting Beyond to report a second-quarter loss of 8 cents per share and revenue of $52.7 million. After its first quarterly report since going public, shares rose as high 23% in after-hours trading.

The expected second-quarter loss is one reason why analysts see Beyond’s valuation as unjustified. Although consumers are increasingly interested in reducing their meat intake, Beyond is still losing money as it rushes to meet the increased demand.

It’s also treading in uncharted waters. It remains to be seen how much long-term demand is really out there for its products. The company could conceivably ramp up production and then end up with a surplus of Beyond Sausages and Beyond Burgers.

So far, 21.6% of U.S. households are purchasing meat alternatives, according to Nielsen data. Out of everyone who purchases meat alternatives, 98% bought meat, a sign that most of the demand is coming from so-called flexitarians. While U.S. consumers bought $95 billion of meat last year at grocery stores, meat substitutes accounted for $893 million in sales, Nielsen found.

The Chinese have a weak hand when it comes to trade