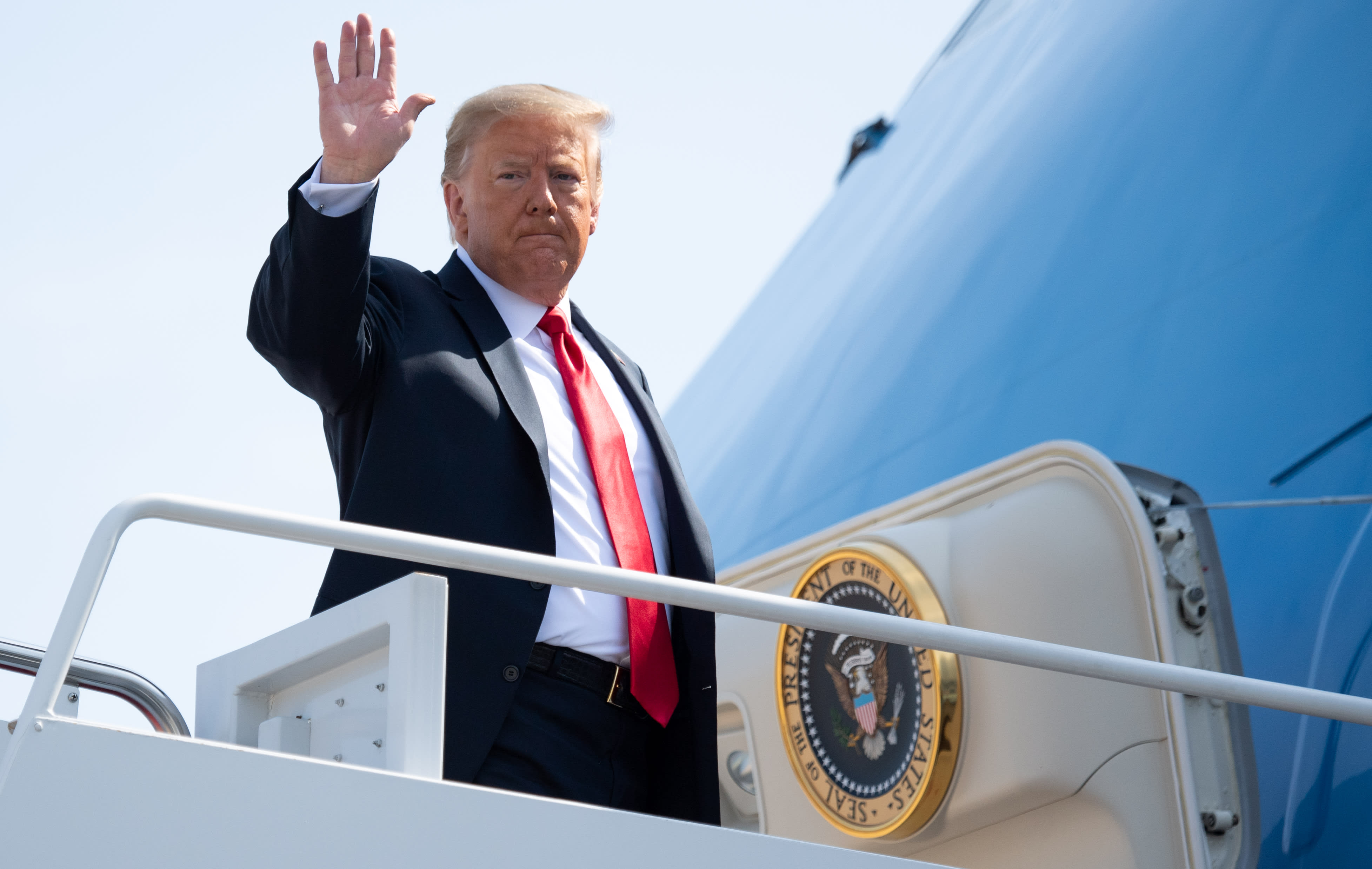 US President Donald Trump boards Air Force One prior to departure from Joint Base Andrews in Maryland, June 23, 2020, as he travels to Arizona to view the border wall and speak at a Republican student event.Saul Loeb | AFP | Getty ImagesThe Arizona Department of Health reported nearly 3,600 additional Covid-19 cases on Tuesday, another record in additional daily cases, ahead of President Donald Trump’s scheduled appearances in the state later in the day. Arizona is averaging about 2,500 daily new cases as of Monday, which is about a 94% increase since one week ago, according to a CNBC analysis of data compiled by Johns Hopkins University.The coronavirus has infected 3,593 people and killed an additional 42 people in Arizona since Monday, bringing the states’ death toll to 1,384, according to the state’s health department.While the rise in daily case numbers could reflect a lag in data reporting or increased testing in certain locations throughout the state, Arizona’s positivity rate has increased from 5% in early May to nearly 20% in June, according to the state’s health department. Its current positivity rate average stands at more than 10%. The positivity rate indicates the percentage of tests that come back positive in a specific region. Epidemiologists say this number can indicate how broadly the virus is spreading throughout a community. Another factor that is watched carefully is hopitalizations, which can indicate how severe cases are in an area. This data can lag the number of new cases. Arizona hospitals have reported more patients in their hospital beds and intensive care units since mid-May when the state began to reopen. About 84% of the state’s ICU beds were in use as of Monday, up from 74% reported in use on Memorial Day. The increase in cases and hospitalizations comes as Trump travels to the state’s border with Mexico and to Phoenix, where he’s scheduled to attend a campaign rally at a local church. Infectious disease experts have warned against large indoor gatherings, such as Trump’s recent rally in Tulsa, Oklahoma, as cases surge in the West and South. “We are actually seeing the fastest rate of growth among our young people in the community, and here it is, a rally specifically focused on that demographic,” Phoenix Mayor Kate Gallego, a Democrat, told CNN on Sunday. “Public health professionals in Phoenix are trying to tell young people to take this seriously.”White House health advisor Dr. Anthony Fauci said during a House Energy and Commerce Committee hearing on Tuesday that parts of the U.S. are beginning to see a “disturbing surge” in coronavirus infections.While New York state is seeing a decline in Covid-19 cases, other states are experiencing a rise in cases that “reflect an increase in community spread,” Fauci, director of the National Institute of Allergy and Infectious Diseases, said. “That’s something I’m really quite concerned about,” he said. The Trump administration has maintained that the Covid-19 response is still a priority.”It’s why the task force meets regularly, the president is given that information. The vice president has been leading on the task force and the president ultimately makes the decisions and is constantly kept up to date with the latest numbers,” press secretary Kayleigh McEnany said during a briefing Friday. — CNBC’s Berkeley Lovelace Jr., William Feuer and Jasmine Kim contributed to this report.