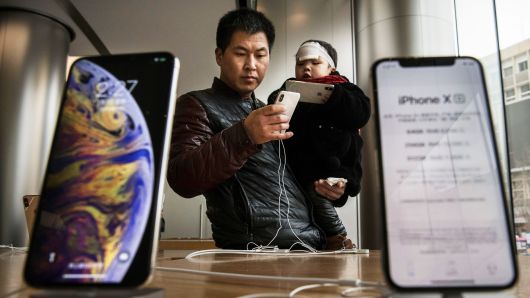 A Chinese man holds his son as they look at iPhones on display at an Apple store on January 7, 2019 in Beijing, China.

An improved camera system will be a major selling point for Apple’s 2019 iPhone lineup, according to a research note from TF International Securities analyst Ming-Chi Kuo.

Improved cameras and picture quality could give consumers a reason to upgrade from older models as iPhone sales growth has stalled in recent years. Camera quality is frequently cited as important factor in surveys about which features are critical to users who are deciding whether to upgrade.

Here’s what Kuo expects from this year’s iPhone cameras:

“We forecast the camera upgrade will be one of the new 2H19 iPhone’s major selling points,” Kuo wrote in the Wednesday note.

Kuo’s research is aimed at investors who buy shares in the companies that sell parts to Apple. He has a reputation for predicting Apple products before they launch.