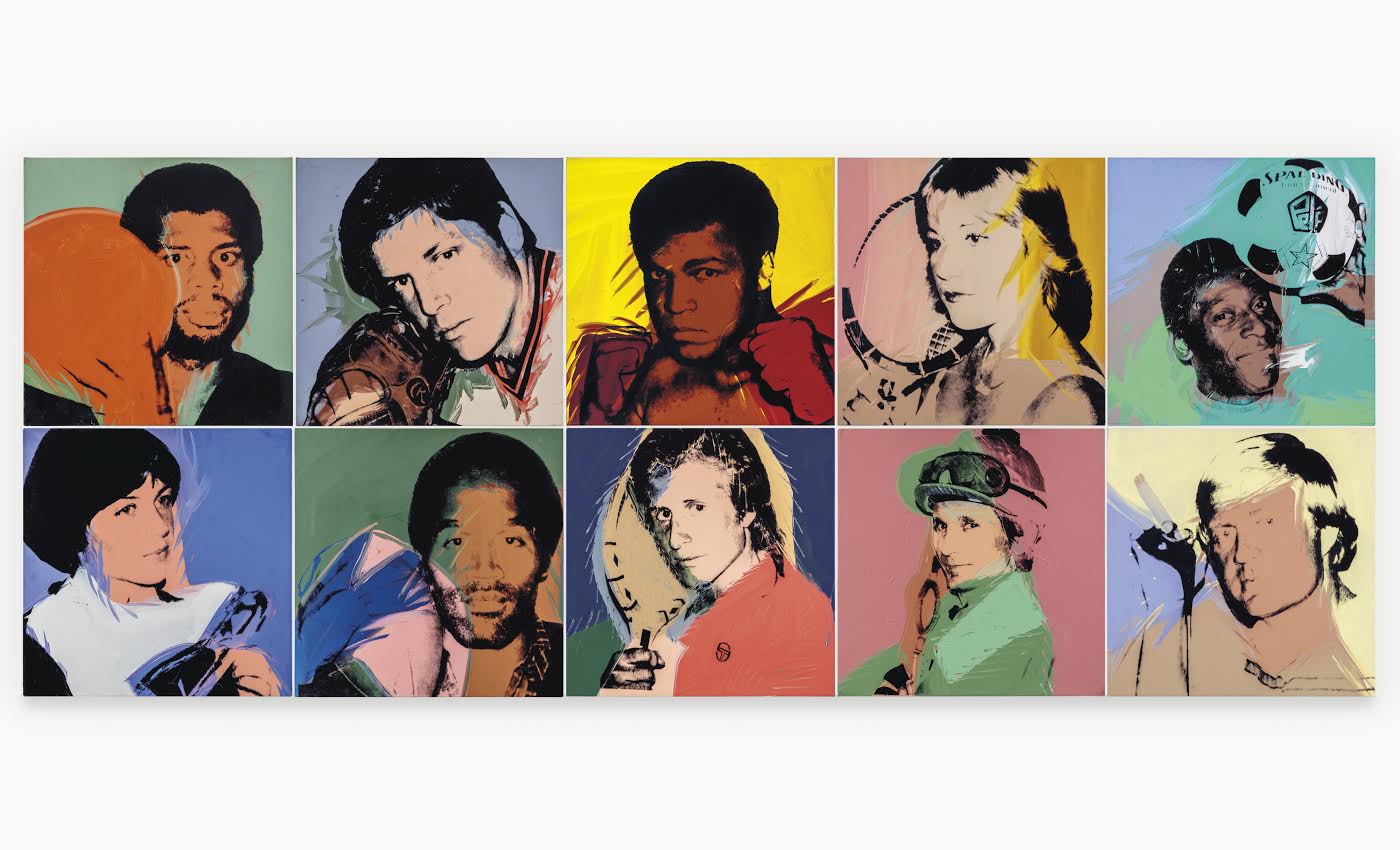 A composite image of some works from Andy Warhol’s Athletes series, which were completed between 1977 and 1979. COURTESY CHRISTIE’S
Christie’s is set to sell a selection of works from the collection of the late businessman Richard L. Weisman through a series of auctions beginning this fall, which is expected to bring in at least $15 million in all. Weisman collected work by Andy Warhol heavily, and many of the works on offer at auction come from the artist’s “Athletes” series, completed between 1977 and 1979, which Weisman commissioned himself.
The works in the series are multi-colored acrylic and silkscreen on canvas images of iconic sports stars from Muhammad Ali—the top lot of the sale, estimated at $4 million to $6 million—to football star O. J. Simpson and figure skater Dorothy Hamill, which each carry an estimate of $250,000 to $350,000. Other sports legends depicted in the series are Kareem Abdul-Jabbar, Pelé, and Chris Evert.The Muhammad Ali piece will go up for auction at Christie’s postwar and contemporary art evening sale on November 13, with other smaller sales, including an online sale of Picasso ceramics, occurring throughout the rest year and into next spring. Other top lots will be sold in the American Art sale on November 20 are two works  by Norman Rockwell: Harvest Moon (1935), estimated between $1 million and $1.5 million, and Red Head (1940), estimated between $600,000 to $800,000.Sara Friedlander, Christie’s head of postwar and contemporary art, said in a statement, “Recognizing the growing commercialization of sports, it is through this series that Weisman challenged Warhol to embrace the changing nature of fame as athletes and sports stars rose to take center stage in American popular culture.”In 2009, the “Athletes” works gained notoriety when 10 of them were stolen from Weisman’s Los Angeles home. Weisman put a $1 million reward on the pieces’ safe return. He eventually got them back, though Christie’s could not confirm the exact details of their recovery.Weisman’s parents, Frederick and Marcia Weisman, were revered art collectors of 20th century art in California and ranked on ARTnews’s Top 200 Collectors in the early 1990s. The couple eventually earning a David Hockney portrait treatment. Hockney’s vision of the couple, American Collectors (Fred and Marcia Weisman) from 1968, shows Marcia in a bright pink dress looking straight on, with Frederick looking out into the distance in what appears to be a sculpture garden. The piece is currently held at the Art Institute of Chicago, and was part of the artist’s recent traveling retrospective.Though his collection is strong in Warhols, Weisman’s first piece of art he acquired for himself was a Robert Matta’s 1955 oil painting Early Urge, and also includes work by artists such as Alberto Giacometti, James Rosenquist, Roy Lichtenstein, and Peter Beard, all of which will also be offered in the Weisman sales.