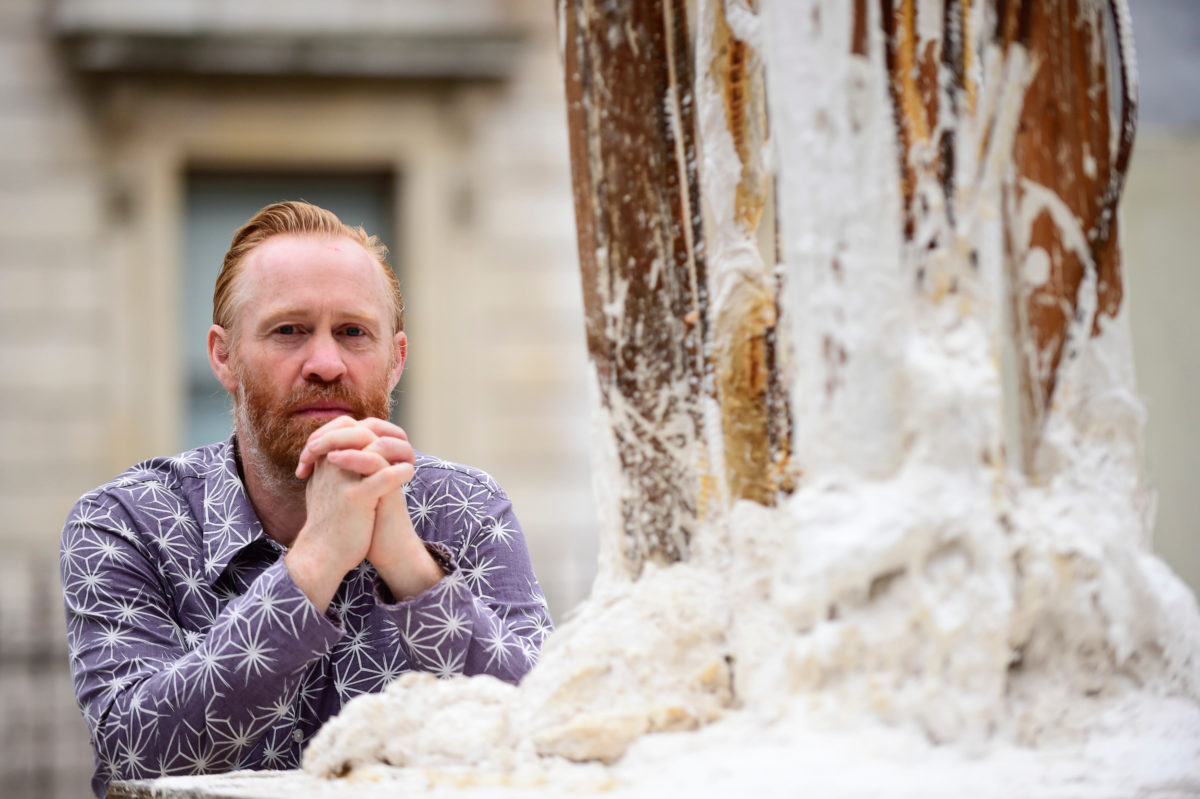 Thomas Houseago.STEPHEN CHUNG/LNP/SHUTTERSTOCK
In his New Yorker profile of director James Gray, whose new movie Ad Astra, starring Brad Pitt, comes out on Friday, Nathan Heller has a point to make about how money and commercialization is negatively affecting film as an art form, and how filmmakers and their works have less time to prove themselves. Lucky for Heller, sculptor Thomas Houseago shows up at Gray’s dinner party and throws in his two cents on something similar happening in visual art.
Here’s the exchange between Gray and Houseago:
“The Godfather came out in five theaters in New York and two theaters in L.A., and then it widened and widened and played for about a year,” Gray said. “Word of mouth was very important. By 1990, movies were coming out in a thousand theaters—now it’s five thousand—over the first weekend. A movie that is a big hit will last only five or six weeks, so they stopped having a central place in the culture. You can’t quote lines from huge hit movies now. Whereas, if I say to you, ‘I’m gonna make him an offer he can’t refuse . . .’ ” He shrugged.Houseago nodded vigorously. “The period when an art space had room to grow and be weird is gone,” he said. “It used to be that if you were a successful artist you could make a living; then you died, and there was a question of what happened to your market. Now you have the contemporary art market existing simultaneously with the secondary market. The pressure on the artist is: do not fuck up your secondary market. You hear that—‘Don’t go off the reservation.’ ”
This is not the first time we’ve heard such a gripe from a visual artist, but it’s significant coming from such a high-profile mid-career one—Houseago shows with Gagosian, the world’s biggest and most powerful gallery—and, on top of that, an artist who makes big works that presumably require a significant production budget (if not one approaching that of the $80 million Ad Astra).In 2017, Houseago’s peer, Mark Grotjahn, whose work has sold for $16 million at auction, stayed mum on the subject of his market in a profile that the New York Times ran, but it is well known that he is very controlling. Robin Pogrebin wrote:
[Grotjahn’s] tight control over both the quantity and sale of his paintings means that he can help affect how much of his work is sold at auction, which can lead to higher bidding. … When collectors buy his work, Mr. Grotjahn expects them to keep it or to donate it to a museum; he tries not to sell to buyers who are likely to resell works for profit.
Translation: he’s trying not to fuck up his secondary market. Whether an artist—or anyone—can actually control it in the end is an open question. The market is the market. Elsewhere, Heller writes: “Gray thought that public reporting of movies’ gross profits, a practice that took off in the eighties, changed the popular conception of what a successful film looked like.”Interestingly, it was during the 1980s that the same thing happened with art prices for living artists. Witness the front-page headline made by a Jasper Johns painting selling to the Whitney Museum in New York for a then-whopping $1 million. That was the headline that kicked it all off. Houseago also weighs in on the changing nature of Los Angeles, the city he calls home (he was born in Leeds, England), and New York, the city in which he briefly lived:
“It’s about the creative life style being packaged with big money. … I was convinced L.A. would be too big and weird to do it, but no. It used to take years. Now it happens in 18 months. … I lived in New York in the early ’90s. A few years later, I saw Friends and thought, What the fuck has happened to New York? People lolling around on couches with no natural predators? They magically have lots of money, and their problems are ridiculous?”
In more pedestrian news, we get to hear Houseago bro-ing out about pasta: “James, how are you feeling about the Bolognese, dude?”

Monet’s ‘Impression, Sunrise’ Will Go On View In Shanghai – ARTnews.com