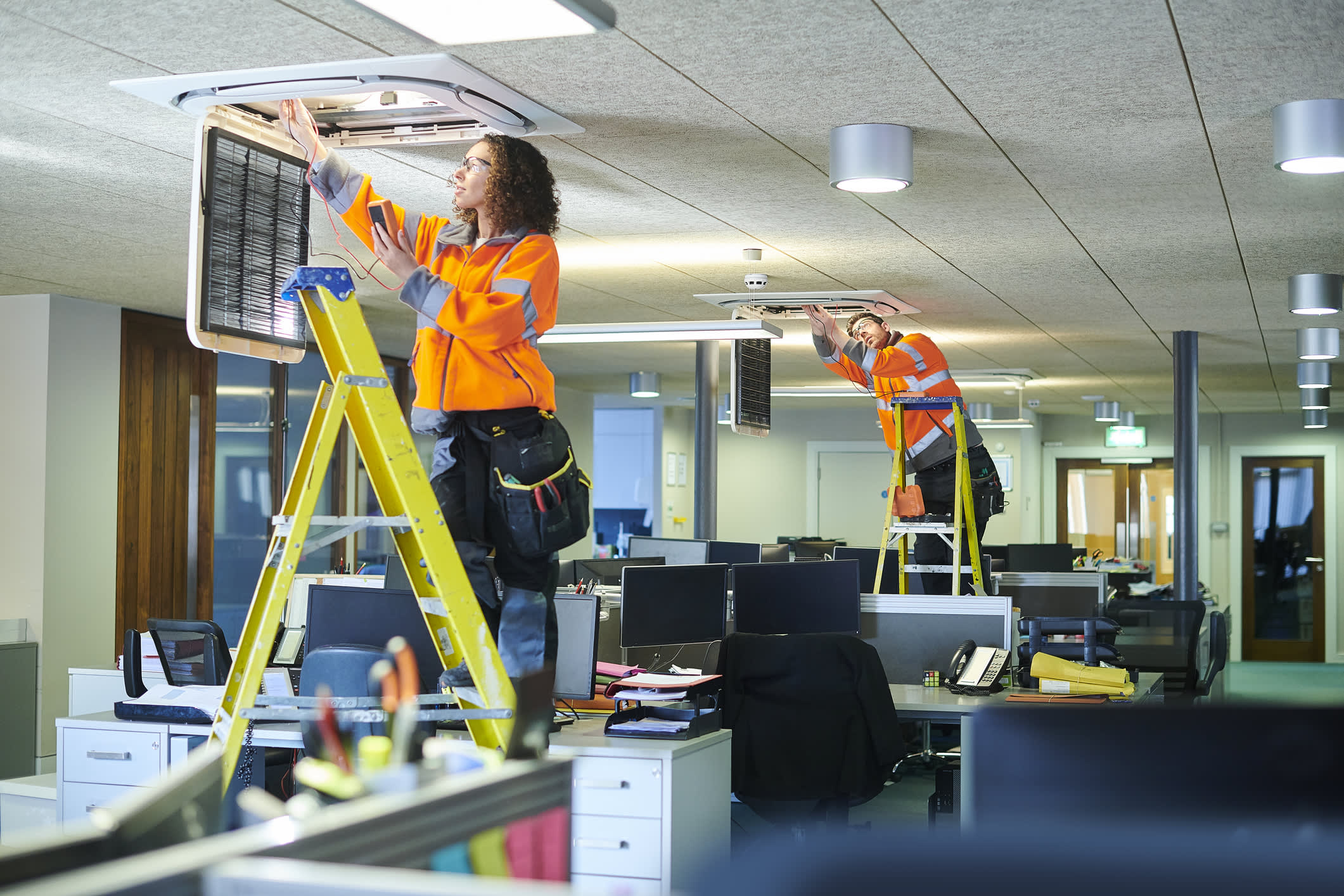 The U.S. is by no means out of the woods when it comes to the pandemic. While booster shots are being approved and the number of deaths may be plateauing, thousands of Americans are still dying each week and we are entering an uncertain cold and flu season with health systems already overwhelmed by Covid cases. New virus strains are also being monitored. But Vin Gupta, who is a health data and respiratory disease professor at the University of Washington and chief health officer for Amazon, says that over the course of the next four to five months, the nation should emerge from Covid feeling safer, and by March or April “renormalizing” what workplaces look like.If workplaces are to be safer, though, and healthier and more productive, one big change needs to be made. Improvements to air filtration and ventilation systems were needed well before Covid, and Gupta says air quality will be the biggest challenge for public and workspaces of this century.”Go back 100 years. The big issue that was killing people were communicable diseases passed fecal to oral,” Gupta said at the recent CNBC @Work Summit. The lack of good sanitation led to a rethinking in how society sanitized, and the development of sewer systems.”100 years later, it is how do we ventilate public space and workplaces,” he said. “The big challenge of our time is how do we ventilate.”Decades of research shows improving ventilation systems in work spaces improves brain function, but investment has lagged.sturti | E+ | Getty ImagesGupta stressed that while Covid may be a catalyst for buildings to adopt better air quality systems, the research supporting investment in ventilation pre-dates Covid and shows that cognitive function and worker productivity get a boost with better air.The research conducted by scientists at the Harvard T. H. Chan School of Public Health has shown across multiple studies that better-ventilated workspaces generate a return on investment.”That’s just creating a better, healthier environment,” Gupta said. “These are the types of innovations that are cost-effective.”The latest research on the impacts of air quality on cognitive function, the third study in a series, just came out last month. It concluded that, on average, cognitive scores were between 61% and 101% higher in green building designs than in conventional buildings, findings that the authors wrote have “wide-ranging implications” because the study was designed to mimic many typical daily indoor environments.Before the pandemic, the science linking air quality to worker productivity wasn’t getting through to the decision makers in the world of building design and office management. The researchers noted in their work that three decades of supporting data has not led to an approach when it comes to building ventilation standards based on anything beyond “acceptable minimums.”Adoption of enhanced ventilation strategies is lagging, and one of the primary authors of the ongoing research, Joseph Allen, who is an associate professor at the Harvard T. H. Chan School of Public Health and the director of its university’s Healthy Buildings program, has been calling for greater awareness and investment in air quality. In a piece for The Atlantic last week, Allen wrote the time has come to treat air quality as a must-have work benefit rather than trendy perks of the recent office era like gyms and coffee bars.”Before the coronavirus pandemic, the interior designers and HR professionals who decide how offices look paid little attention to ventilation — an invisible variable that determines whether people can think well at their desk and whether coughs, colds, and other respiratory ills will circulate within a company,” Allen wrote.One stat Allen likes to cite: People spend 90% of their lives indoors, or in an 80-year life, 72 years in spaces that probably haven’t taken care to design ventilation for optimal well-being.Gupta said at the CNBC event that HVAC system improvements are not only cost-effective when measured by long-term productivity gains, but are good for workforce retention, a significant issue amid a tight labor market and health and safety concerns among many Americans about returning to physical workplaces.Amazon has many health issues among its workforce and health-care solutions it is working on, from putting its new Amazon Care services in reach of its entire workforce, expanding those services as a nationwide business, to pharmacy services and solving chronic issues among workers in its warehouses, where it has been rolling out a slew of new wellness initiatives aimed at reducing physical injuries among manual laborers. Working conditions within Amazon warehouses are a major issue that has led to labor strife and union organizing drives.Amazon and its large-tech peers may be in a better financial position to spend on health-care solutions than small- and medium-sized firms, but Gupta said employer spending on health — not only air quality but access to health-care services, including telehealth and virtual mental health services which he said will be a “raging” trend in the next decade — should not be viewed by the finance department as a cost, Gupta said, but as a cost-effective investment in the workforce.He also said investment by companies in workplace health should include elevating medical strategy to a C-suite position. Gupta, who has been chief health officer at Amazon for 20 months, said, “If you don’t have a chief health officer or someone fulfilling this role for your organization, you should recruit one.”

Europe’s low-cost airlines could have the edge in a post-Covid world
Arpine Abrahamyan: happiness is the most profitable business project!
To Top
error: Content is protected !!