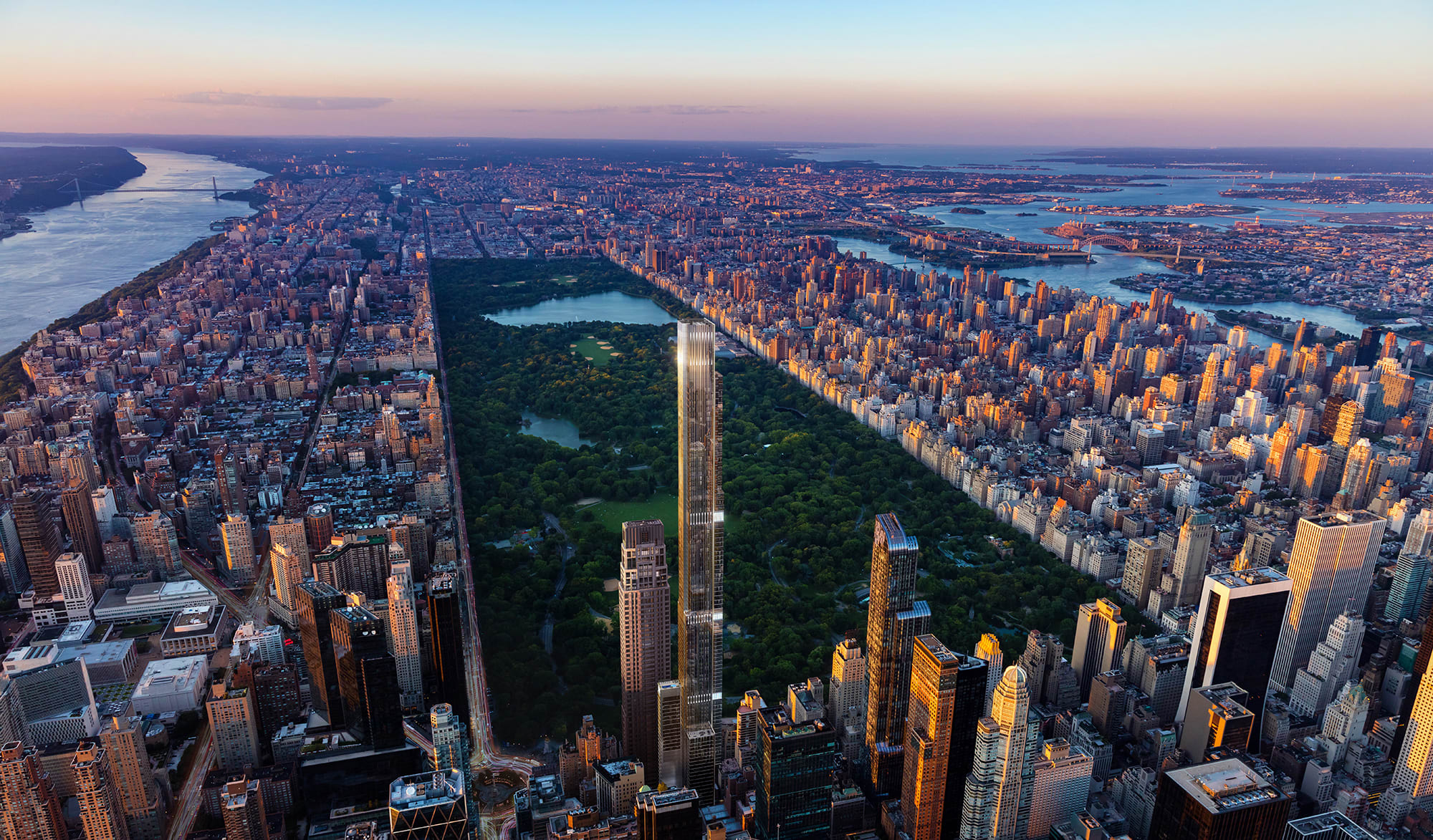 Like vast wealth, the view from the 123rd floor of the tallest apartment building in the world can quickly warp your perspective on life.At nearly 1,400 feet, looking down on the Empire State Building, you aren’t just above New York City – you lord over it. Cars become toys and people become dots. Central Park shrinks from a lush oasis of trees and playing fields to a small grass welcome mat to your private domain. Your head is truly in the clouds.Rather than staring out at brick walls, garbage-strewn streets or other people’s windows, you gaze out at sunrises and sunsets, oceans and sounds, bridges and mountains, and the vast funnel of money and real estate that flows south and collects in the gilded sliver of Manhattan below.View of Central ParkSource: ExtellAnd there are the helicopters. As befits the perspective of a true modern plutocrat, when you’re half-a-Chrysler building above the Chrysler building, helicopters fly below you. For views like this, only Gulfstreams need apply.Central Park Tower is not just a new building – it’s a statement. Topping off at 1,550 feet, with 131 floors, it will be the tallest residential building in the world. It may also be the most expensive condo project ever, with up to $4 billion worth of apartments to be sold.The building has all the amenities that a Shenzhen property magnate or Qatari sheikh would expect – a pool (indoor and outdoor), gym, spa, restaurant and a seven-story Nordstrom’s, meaning you could pop down for a diamond Cartier bracelet without having to take off your slippers. Otis Elevator developed a special high-speed elevator that goes 2,000 feet per minute, whisking you up 131 floors in a minute and a half. And to keep it from swaying in the wind, it has elaborate cantilevers and aerodynamic openings, as well as a huge weighting system on the roof.The indoor poolSource: ExtellBut in the end, Central Park Tower’s financial fate rests on those views, and the emotions they will stir in today’s global rich. The building’s 179 apartments will start at $7 million for a two-bedroom and likely soar to nine-figures for the top penthouse.’No room like this’Height in today’s top cities is like money: a clear and brutal measure. In New York, which is teaming with millionaires and billionaires and masters of the universe, Central Park Tower is selling the physical experience of utter domination. Of reaching the definitive top. Of waking up every morning and literally looking down on everyone else.”There is no room like this in any other building,” said Gary Barnett, the CEO of Extell Development, the developer of Central Park Tower, standing in the 1,500-square-foot mass of concrete and glass that will become the “grand room” of a giant unit on the 123rd floor. “Not just the height and the spectacular views, but the actual room.”The lobby Central Park Tower.Source: ExtellWhile Central Park Tower reached its full height Tuesday, and most of the exterior is built out, the interiors will take longer to complete. Extell estimates the building will be completed in late 2020, allowing buyers to start closing. But the apartments have been offered for sale – or at least renderings of them – for over a year.Overcoming luxury market meltdownAnd the big question is whether Central Park Tower is high enough to rise above the luxury market meltdown. The huge supply of new condo towers in New York has pushed buyers to the sidelines. Add to that fears of a recession, the new federal cap on state and local tax deductions — which has hurt real estate in high-tax states — and New York’s new mansion tax, and you have a luxury market that feels like it’s in recession. By one estimate, one in four new condos built in Manhattan since 2013 remain unsold and empty.Barnett declined to give sales numbers so far. He estimates that about half of the sales will be to “English speakers” – mainly North America – with the other half being overseas buyers, with about 15% to 20% from Asia.But China is a big unknown for the project. Extell’s financial partner in the building is a subsidiary of Shanghai Municipal Investment, a sovereign fund of the Shanghai local government. Funding also came from the EB-5 visa program, which is dominated by Chinese investors.With the Chinese economy slowing, and the trade battle and war-of-words between the White House and China dragging on, Chinese buyers are avoiding U.S. real estate.”We’d love for everyone to be happy and at peace,” Barnett said. “And China would be pushing all of their people to be buying in the U.S. like they did four or five years ago. That’s not the case. But we definitely still see good demand from the Chinese market.”Barnett said he can afford to offer discounts to adapt to today’s market. He said the building cost more than $2 billion to build – including land and all other costs – which included a $900 million construction loan from J.P. Morgan Chase. While the sales total will fall short of the original $4 billion estimate, “we’re not under any pressure, since we have very low leverage,” Barnett said.”But we will have to take some discounts,” he said, adding that they could be as high as 25% or more.Living and dining area.Source: ExtellThe unit on the 123rd floor, for instance, would have priced at about $85 million during the peak four years ago, but is being offered at $70 million today. Penthouses on the top floor, which have yet to be released or priced, could well top $100 million. Barnett said 220 Central Park South, a condo tower across the street, sold for about $8,000 a square foot, while Central Park Tower will average around $6,800, “and we have better views and better amenities.””We think we are offering great value,” he said.Kitchen viewSource: Extell