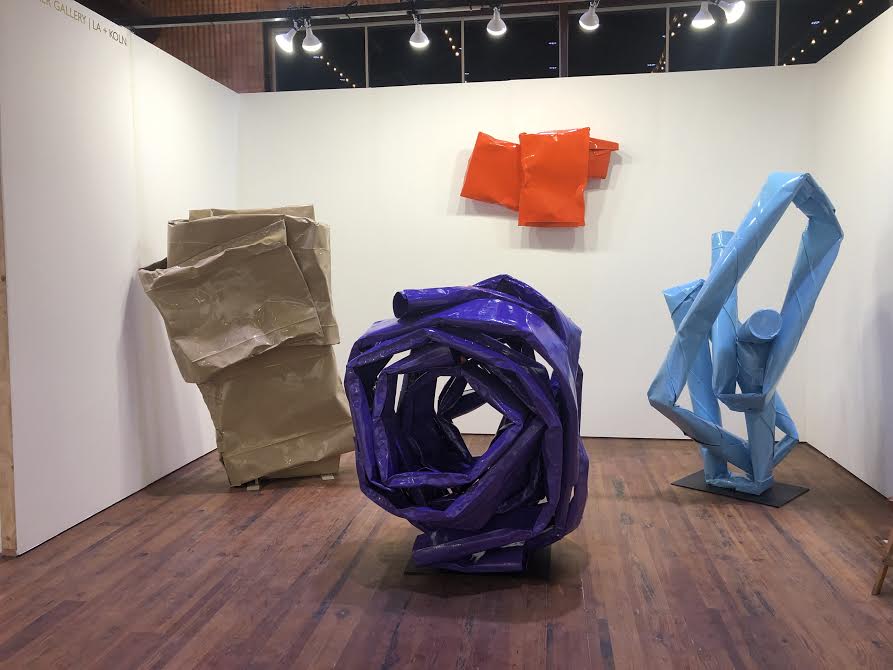 Thursday marked the opening of the first Marfa Invitational, an art fair for the West Texas ranch town that has become an artistic enclave since Donald Judd set up shop in the 1970s. The new enterprise was founded by the artist Michael Phelan, a New York expat who moved to Marfa and invited nine visiting galleries to exhibit one artist each, with an intention to keep the event intimate.

“When you’re in Marfa, it’s really this kind of immersive experience where you have time to look at the works,” Phelan told ARTnews when the show was announced. “What I wanted to create with the fair is a similar model.” 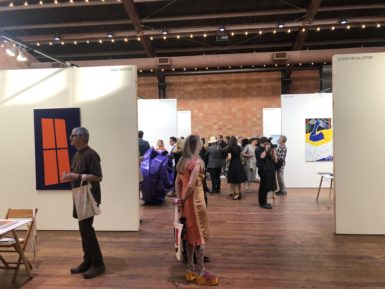 Half Gallery’s Bill Powers, showing a survey of paintings by the Korean artist Hiejin Yoo, said at the opening, “It’s fun to be a part of something right at the beginning. There’s been a nice camaraderie between the dealers and the artists that is uncharacteristic of most other fairs.”

A sense of camaraderie carried beyond the exhibitors. Opening night drew a mix of locals and out-of-towners, with folks sipping Shiner Bock in cowboy hats mingling with collectors in blue blazers swishing Champagne flutes. One of the locals in attendance was Jane Crockett, the mother of artist Leo Villareal, whose family set up a ranch nearby more than a century ago. “I think the fair is wonderful,” Crockett said. “Michael did a fabulous job. I think the locals are happy to have him.”

Crockett’s grandfather settled in 1885 on that Marfa ranch, which is still maintained today, and her grandmother was one of the first locals to welcome Judd to the town. “She thought it was exciting, unlike some of the other ranchers,” Crockett recalled. “But Marfa needed a boost.” Her hospitality was not always welcome, though. “She sent him a plant! I don’t think he was a plant guy, though.”

In the midst of the opening, Half Gallery sold three works by Yoo for prices between $2,500 and $8,500. A painting by Corey Mason sold at Achenbach Hagemeier for $6,800. At Marianne Boesky’s booth, textural, geometric paintings by Svenja Deininger went fast: six out of the nine works offered sold within the first hour, for prices between $10,000 and $45,000. Across the way, at Bill Brady’s booth, a painting by Tomoo Gokita sold for $140,000 to collector Alison Blood.

The Saint George Hotel is located adjacent to a set of train tracks, and the night was punctuated by occasional vibrations and noise that blared in a manner both startling and meditative. “Everyone’s each other’s neighbor,” Mason, the painter, said. 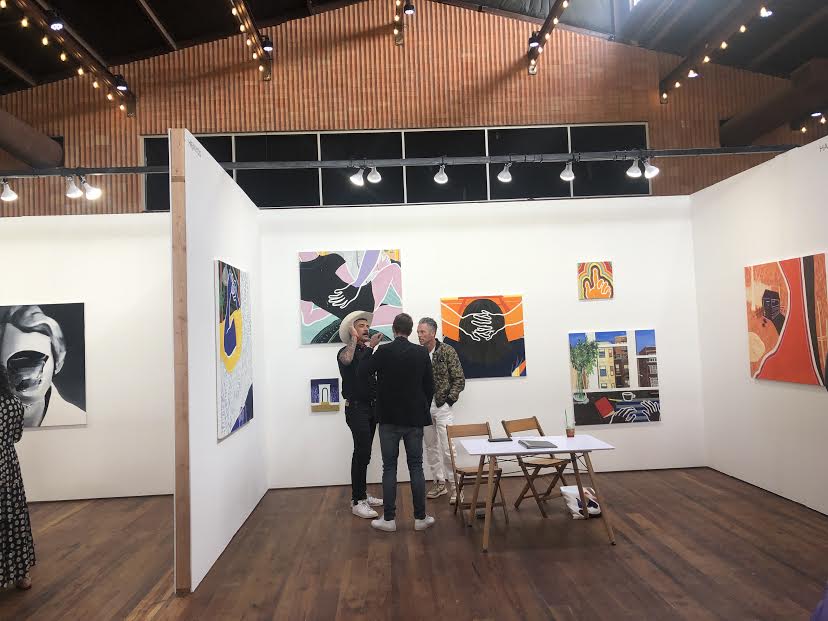 Half Gallery’s booth of works by Hiejin Yoo.

Among the fair’s other offerings were, at Nino Mier’s booth, brightly-colored, crunched metal sculptures by Anna Fasshauer, who made the pieces on display during a residency in Marfa. Margaret Zuckerman, the gallery’s associate director, associated them with another famous artist in town. “When I was in the room where the John Chamberlain sculptures are displayed,” she said of a local offering of the late sculptor’s work, “I looked out the window and saw Anna’s studio. So obviously the pieces are informed by Chamberlain.”

As the opening came to a close, visitors ambled to the backyard of the ballroom where a pool was lit up and heated. Tacos and quesadillas were served, with margaritas to wash them down. Phelan, looking spritely in a tan leather cowboy hat, looked out and said, “All roads lead to Marfa!”