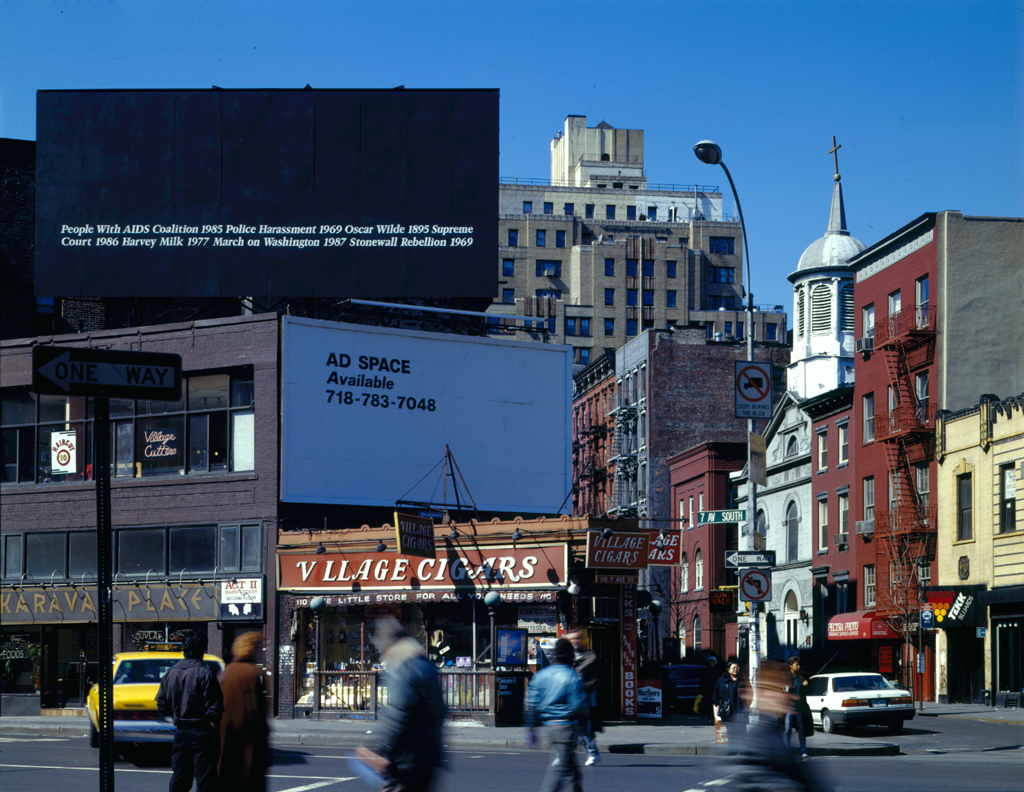 In recent years, public art in New York has come to represent monumental, spectacular sculptures, but now one institution is returning to its roots by using modes of advertising as public and artistic interventions.

For the entire month of June, the Public Art Fund will present a restaged version of Felix Gonzalez-Torres’s first billboard work, which first appeared in the West Village in New York. First unveiled in 1989, the work will be situated in its original location, on the corner Seventh Avenue and Christopher Street, above Village Cigars and steps away from the Stonewall Inn.

The organization commissioned Gonzalez-Torres to create the work to commemorate the 20th anniversary of the Stonewall Rebellion, which is often credited with catalyzing the Gay Liberation movement. Now, 30 years later, on the eve of the event’s 50th anniversary at the end of June, the fund has collaborated with the estate of the late artist, who died from AIDS-related causes in 1996 at 38, and Google, which usually advertises in the billboard space.

“While the work has been installed in many locations around the world, there is not a time I go by that corner that I don’t imagine the billboard being there,” Andrea Rosen, the president of the artist’s foundation, told ARTnews in an email.

[Read a roundtable discussion about Stonewall’s impact on the art world.]

Nicholas Baume, the director and chief curator of the Public Art Fund, said that the work had always been one that the fund had been proud of, partly because it presaged Gonzalez-Torres’s later use of billboards spaces as artworks. “It adopts the format of advertising in the sense of being a printed billboard,” Baume told ARTnews, “but, of course, its minimal appearance contradicts the typical style of urban, large-scale billboard advertising. Even 30 years on, it looks like something that would make you stop and say, ‘Wait a minute. Is that an ad? What is that?’ ”

The billboard is mostly black, save for two lines of white text, and relies on the artist’s typical non-linear presentation of dates and events as a means to collapse the notion of history as something chronological. The text for the billboard reads: “People With AIDS Coalition 1985 Police Harassment 1969 Oscar Wilde 1895 Supreme Court 1986 Harvey Milk 1977 March on Washington 1987 Stonewall Rebellion 1969.”

“We’re 30 years further removed from those dates,” Baume said. “It’s an opportunity to reflect on history and the struggles, the individuals, the movements, the activism, the bravery, the risks, the challenges. Those layers are woven into the work.”

An estimated 100,000 to 200,000 participants in the 1989 Gay and Lesbian Liberation Day March passed by the piece during its original presentation. This year, even more people might see it when New York City acts as the host of World Pride, an international 30-day extravaganza that is expected to bring over 3 million people to the city. Two Pride marches also will be held in New York on June 30.

The re-presentation of the Gonzalez-Torres work is the latest example of the Public Art Fund revisiting its storied history in artists commissions in advertising years. From 1982 to 1990, among its regular exhibition sites was the Spectacolor board in Times Square, which hosted “Messages to the Public,” a series of commissions through which important works by Jenny Holzer, Hock E Aye Vi Edgar Heap of Birds, Barbara Carrasco, and Jeffrey Pittu debuted. Last month, the Public Art Fund announced a new exhibition series across 100 bus shelters throughout New York City, a collaboration with JCDecaux. The first artist to take up the task, opening in August, will be Elle Pérez.

“It’s a very different thing to put a static work on a pedestal in a public square versus to use an advertising billboard as a space for a work of art,” Baume said. “It’s not like seeing it in a museum, but in a very specific context that resonates with the content of the piece. You don’t need to wear the robes of a museological presentation to be a powerful work of art.”

A Report from the First Marfa Invitational Art Fair -ARTnews
Paintings by Arakawa Beguile at Gagosian in New York -ARTnews
To Top
error: Content is protected !!