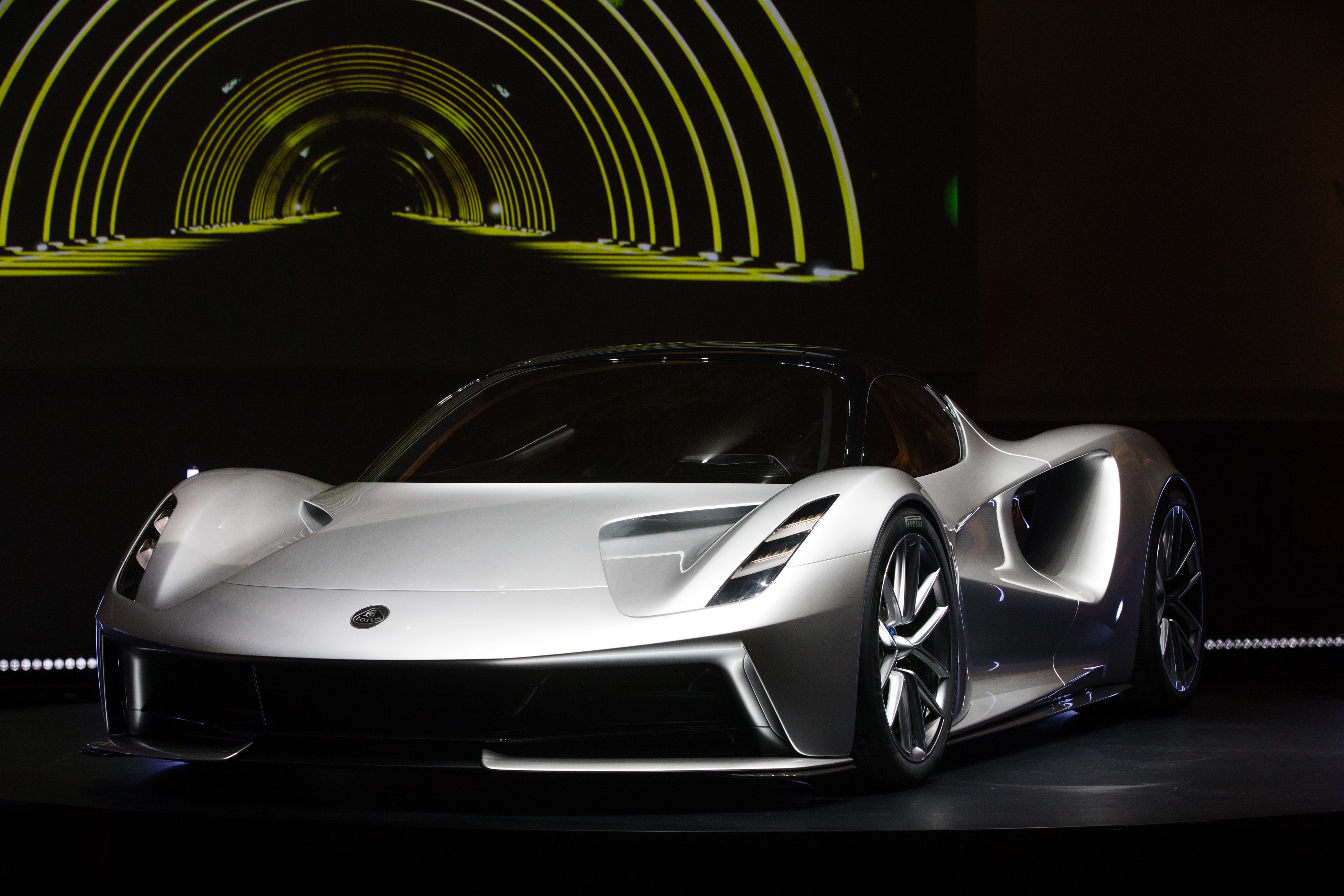 It’s been 11 year since Lotus Cars introduced a new model, so it’s making sure the first car out of that drought won’t get lost in the crowd.

The new Evija — pronounced “e-VY-a” – is an all-electric hypercar that can zap out nearly 2,000 horsepower, enough to launch it from 0 to 60 in less than three seconds, with a top speed of more than 200 mph. Since it won’t come out until next year, potential buyers will have time to start counting pennies. Lots of them, as the Evija, will go for just over $2 million at current exchange rates.

The Evija is the latest in a growing list of all-electric exotics coming to market, a list that already includes the Rimac C Two and Pininfarina Battista, with Tesla promising similar performance numbers out of the second-generation Roadster currently under development. Meanwhile, a number of automakers are using various hybrid technologies to give their own high-performance models a boost, including Alfa Romeo and even Ferrari.

“The Lotus Evija is a car like no other,” Lotus CEO Phil Popham in a statement announcing the new model. “It will reestablish our brand in the hearts and minds of sports car fans and on the global automotive stage. It will also pave the way for further visionary models.”

The rear of a Lotus Evija electric hypercar.

Lotus clearly needed to make a statement with this car. The British brand has faced some major problems in recent years. Plans to roll out five new models fell apart when its Malaysian parent, Proton, fired CEO Dany Bahar in 2012, and some questioned whether Lotus would survive. Five years later, however, it was taken over by China’s Geely, which had already acquired Sweden’s Volvo.

The Evija is the first in an assortment of new models that the deep-pocketed Geely, which bought a 51% stake in Lotus in 2017, promises to bring to market. Known internally as the Type 130 — which represents the number of different models Lotus has designed over the years — only 130 copies are planned.

Under founder Colin Chapman, a legendary racer who died in 1982 at just 54, Lotus adopted the mantra, “simplify, then add lightness,” something clearly visible in its aging lineup of models like the little Elise. The Evija doesn’t quite live up to that, weighing in 3,703 pounds. But a disproportionate share of that is for the battery pack. Lotus engineers have offset some of the mass by adopting an ultra-light carbon fiber chassis for the hypercar.

The British marque also claims to have the world’s fastest charging battery pack, capable of going from completely depleted to 80% of 70 kilowatt-hour capacity in 18 minutes. That will require one of the brand new 800-volt, 350-kilowatt Level 3 fast chargers that are just beginning to be rolled out in Europe and the U.S.

Evija is expected to deliver 250 miles per charge, according to Lotus, but that’s using the European WLTP test cycle. Expect something just north of 200-miles range if the electric hypercar ever makes it to the U.S. — something that Lotus has not yet confirmed.

If it does, however, it may have to make some changes to the hypercar. Among other things, U.S. regulators have not yet approved the use of the fender-mounted cameras that Evija replaces traditional mirrors with in order to improve its aerodynamics.

While electric vehicles initially earned a reputation for being slow and stodgy and offering limited range, that is no longer the case. The latest batteries can carry significantly more energy and new motors can greedily make use of all that power. A key advantage is that they deliver maximum tire-spinning torque all but instantaneously.

As a result, there are a flood of exotic manufacturers hoping to appeal to well-heeled performance fans. Croatia’s Rimac also claims to make about 2,000 horsepower in its latest model, the C Two, with an estimated 0 to 60 time of under two seconds. Italy’s Pininfarina says the Battista hypercar will make 1,900 horsepower and match the Rimac’s 0 to 60 run. Tesla expects to bring similarly lofty numbers to the street with the upcoming Roadster redux.

Some manufacturers prefer to use electric boost on their highest-performance models. That includes Alfa Romeo, Maserati and Ferrari. The latter of the three Italian marques recently introduced its new SF90 Stradale which pairs three electric motors with a 4.0-liter V-8, the combined output coming to 986 horsepower. That might seem modest in comparison with the Evija, C Two and Battista, but it’s enough to launch the latest model from the prancing pony brand to 60 in 2.5 seconds with a top speed also rated at 217 mph.