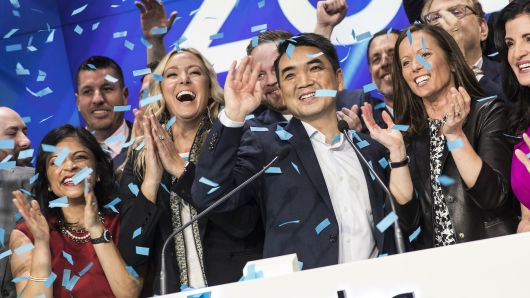 In just its third day of trading, Zoom has already surpassed Lyft to become the most valuable of all the tech companies to go public this year.

The three companies have kicked off what’s expected to be a big year for high-profile tech IPOs, with Uber’s offering right around the corner and Slack’s expected direct listing not far behind as well as an expected share sale from Postmates.

Zoom’s fast start even surprised founder and CEO Eric Yuan. Pinterest and Lyft had raised money at much higher valuations in the private market and both are much bigger in terms of revenue. But Zoom is growing more rapidly than it’s consumer peers, more than doubling sales in 2018, and the company is profitable while the others continue to burn cash.

The videoconferencing company’s rally so far stands in stark contrast to Lyft’s rocky start to trading. Since its debut on March 29, Lyft has seen its stock price fall 16% from its $72 IPO price as investors anticipate Uber’s offering.