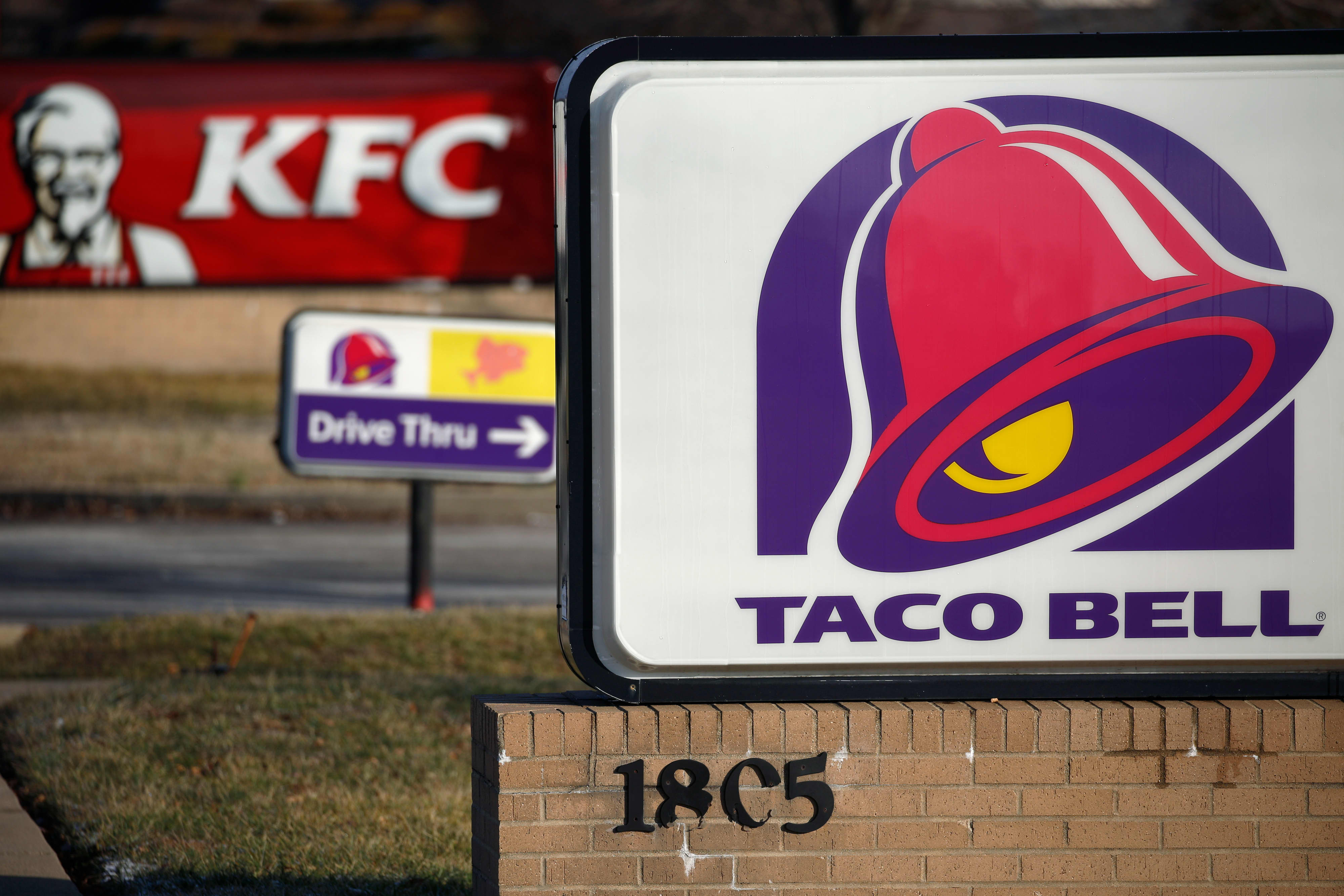 Signage is displayed outside a Yum! Brands Inc. Taco Bell and Kentucky Fried Chicken (KFC) restaurant in Louisville, Kentucky, U.S., on Thursday, Jan. 30, 2020.Luke Sharrett | Bloomberg | Getty ImagesYum Brands on Thursday reported quarterly earnings and revenue that topped analyst predictions as sales at its three major brands outpaced pre-pandemic levels, and it opened new restaurants at a record pace. Shares of Yum were up more than 5%, after reaching a 52-week high of $129.06.Here’s how the company did for its second quarter ended June 30 compared with what analysts surveyed by Refinitiv were anticipating:Earnings per share: $1.16 vs. 96 cents expectedRevenue: $1.6 billion vs. $1.48 billion expectedDuring its second quarter, the company reported a net income of $391 million, or $1.29 per share, compared with $206 million, or 67 cents per share, from a year earlier.Excluding refranchising gains and other items, Yum earned $1.16 per share, beating the 96 cents per share expected by analysts surveyed by Refinitiv.The company’s revenue grew 34% from last year to $1.6 billion, and outpaced expected revenue of $1.48 billion. Worldwide same-store sales grew 23% in the quarter. Yum’s same-store sales grew 4% on a two-year basis, even as 1% of its restaurants remained closed due to the pandemic as of the end of the quarter, CEO David Gibbs said.Yum said it opened 603 net new locations during the quarter and it plans to pick up the pace of its expansion by reinstating its long-term growth targets. Yum said it plans to grow the number of restaurants it operates by between 4% and 5% over the long term, up from its previous guidance of 4% growth.The company delivered $5 billion in digital sales, a 35% increase over the prior year, Gibbs said. For the first time on a trailing 12-month basis, it tallied more than $20 billion in digital sales.Taco Bell U.S. launched a rewards program last year that has contributed to the growth of the brand’s digital sales.”We’re seeing significant uptick in frequency and higher spend for visits, leading to an increase in overall spend of 35% for active customers in the Taco Bell rewards program compared to their pre-loyalty behavior,” Gibbs said.Earlier this year, the company launched an app and website for KFC, replacing its third-party website, which has increased its digital sales.”Our 2021 digital sales are on pace to soon surpass last year’s full year digital sales amount,” Gibbs said.Chicken sandwich warsKFC is also seeing demand for its new chicken sandwich, which it introduced in late February to compete in an industry-wide battle. In April, KFC said it sold more than twice the volume of its new chicken sandwich compared with past versions. Momentum has continued. “Our chicken sandwich performed exceptionally well and provides us with a solid platform to drive additional sales layers in the future,” Gibbs said on the company’s conference call.KFC’s same-store sales grew 30% in the quarter, led by growth in the U.S. On a two year basis, same-store sales were up 2%. KFC’s international same-store sales fell 1% over the two-year period as 2% of KFC stores remain temporarily closed as of the end of its second quarter. U.S. same-store sales grew 19% on a two-year basis as pandemic restrictions ease and diners came back.KFC opened 428 net new locations in 62 countries during the second-quarter.Delivery lifts Pizza Hut salesPizza Hut’s same-store sales grew 10% this quarter. The brand’s same-store sales grew 1% on a two-year basis. Only 2% of its stores were still temporarily shut during the quarter. U.S. same-store sales jumped 9% on a two-year basis, while international same-store sales shrunk 6%.Delivery continued to be the brand’s primary driver of growth, Gibbs said.Taco Bell’s same-store sales grew 21% in the quarter. On a two-year basis, its same-store sales rose 12%.In the tight labor market, Taco Bell has sweetened its employee benefits by offering paid time off, free family meals and increased employee development activities, according to Chief Financial Officer Chris Turner.The company has increased its product pricing moderately across its U.S. brands to offset higher commodity costs and wages. Gibbs said the company is experiencing more inflationary pressures in the U.S. than in its international markets.”We are seeing inflationary pressures, primarily in the U.S.,” Gibbs said. “We have greater purchasing scale than most players in the industry … which leverages purchasing across the brand, gives our franchisees advantaged cost and negotiating capability from a sourcing standpoint.”Read the full press release from Yum Brands here.