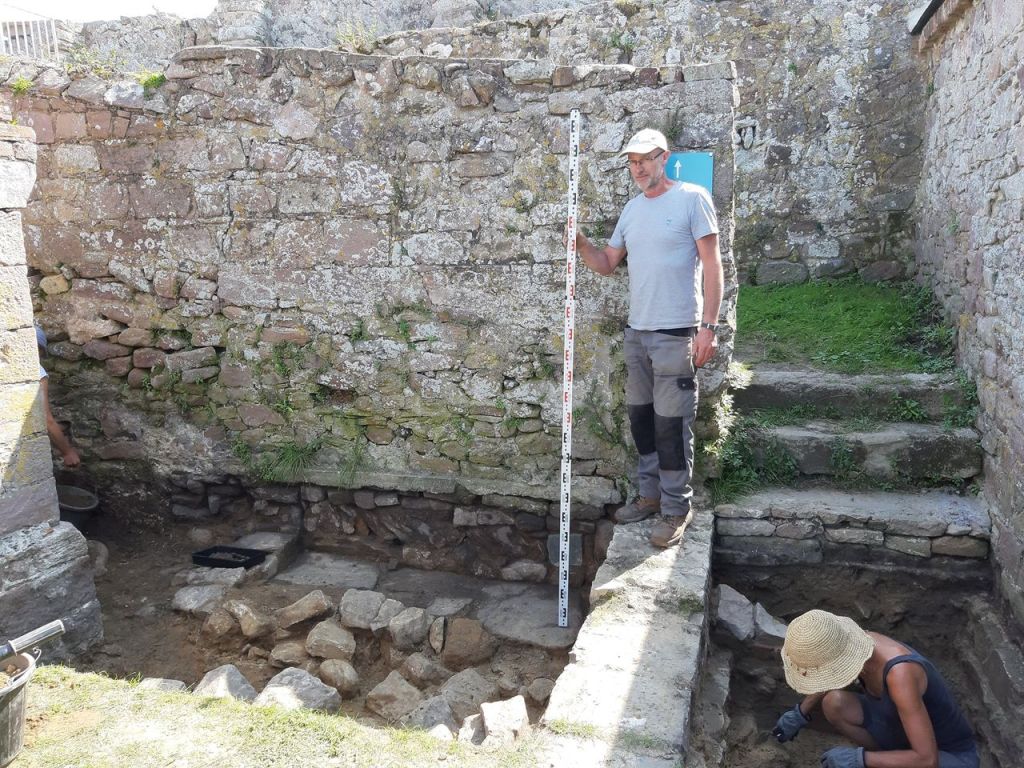 A team of archaeologists on the island of Alderney, the northernmost of the Channel Islands located between England and France, have found a World War II Nazi bunker built directly inside an ancient Roman fort, according to BBC News. The site, nicknamed the Nunnery, has revealed overlapping structures from the medieval, Tudor, and Napoleonic eras.
Alderney has been inhabited since at least the Neolithic period, with a burial chamber on the island dating to 4,000 B.C.E. The Roman tower at the Nunnery is the first evidence of military construction on the island and was used to protect a nearby Roman settlement.

Originally built in the 4th century C.E., the 26-foot-tall Roman fort features a central tower with walls that are 10-feet-thick, and is considered one of the best-preserved Roman forts in Britain. The Alderney Nunnery is the perfect position from which to defend Longis Bay, the island’s only natural harbor. Nazi soldiers took advantage of this strategic location, which is just 60 miles off the coast of England and eight miles from France, by building a bunker inside the preexisting fort.

“During WWII the Germans occupied Alderney and converted the Roman fort into Resistance Point Piratenschloss (Pirate’s Castle),” said lead archaeologist Jason Monaghan in an email. “This was our first chance to see how the German bunker and [Roman] tower were related,” noting that the various layers of re-fortifications were “hidden in plain sight.”
Alderney was the only British territory to be invaded by Nazis and remained under their control from 1940–45. Most islanders had already been evacuated when German soldiers established two forced labor camps and two concentration camps. They brought 6,000 people to the small island by 1942. After Adolf Hitler decided to fortify the Channel Islands and create an “impregnable fortress,” imprisoned laborers were used to build anti-tank bunkers, gun emplacements, air raid shelters, tunnels, and concrete barricades. A “secret” report, later made available to the public, details the horrific treatment of prisoners at the Lager Sylt and Lager Norderney concentration camps, which were taken over by the paramilitary organization Schutzstaffel (S.S.) in 1943.
“The Germans inserted their Type 501 bunker neatly into the tower ruins, using the north and south internal walls effectively as shuttering to pour their concrete,” added Monaghan in a press release. Other additions throughout history include the home of Alderney’s governor during the Tudor period, a powder magazine in 1793, and a “gun ramp” predating the 18th century.

“It sometimes feels like bits of four jigsaws thrown together,” said Dig Alderney, a local charity focused on excavating the Nunnery, in a Facebook comment. This year’s dig ran from August 19–29, with plans to return next year. Part of the Roman tower is being left on display to show its sheer size, while work has begun on transforming the Nunnery Heritage Site into a visitor attraction that will include information-based displays, education rooms, and exhibits that highlight the site’s importance.
Further investigations in spring 2022 will focus on the medieval and Tudor components, as well as neighboring Iron Age and Roman ruins.