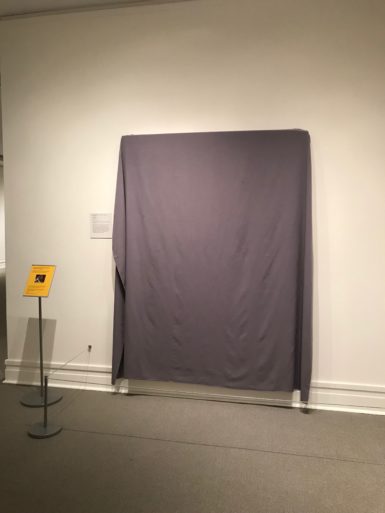 Chagall’s The Lovers in the Met Fifth Avenue’s modern and contemporary art wing.

Visitors exploring the modern and contemporary wing at the Metropolitan Museum of Art in New York this week might notice a conspicuous sight: a painting hidden from view by a large gray shroud. Underneath is Marc Chagall’s The Lovers (1913-14), which the museum has covered up as part of a campaign commemorating World Refugee Day.

The initiative was organized in collaboration with the International Rescue Committee, a New York-based humanitarian organization that for more than 80 years has provided aid and relief to refugees around the world—including Chagall himself in 1941, when he fled Nazi-occupied France during World War II. The Lovers depicts the artist with his wife Bella, and Chagall’s granddaughter Bella Meyer (named after her grandmother), was in attendance at the Met on Monday when The Lovers was covered in gray.

“The Met is newly aware of its responsibility to not have a neutral position,” Sheena Wagstaff, chairman of modern and contemporary art at the Met, told ARTnews during a visit to the museum. “That’s not unusual in the ecology of museums now. It’s not being party-political, but it is about taking a responsibility to address social injustice to become a vehicle through which issues like migration and climate change have a place—not just as a platform for debate but also to really engage in terms of outreach.”

About the plight of refugees, Wagstaff said, “It’s a living issue and it has ever more urgency, and that’s what we need to be addressing.”

For a campaign launched Monday and running through the end of World Refugee Day on Thursday, other works at the Met have been highlighted with bright yellow signs bearing a message: “This work was made by a refugee.” At the museum’s main building on Fifth Avenue, works with marks of the sort include Max Beckmann’s The Beginning (1946-49) and The Old Actress (1926) as well as Max Ernst’s Gala Éluard (1924) and Piet Mondrian’s Composition (1921). A few blocks away at the Met Breuer, the signs accompany works in the ongoing “Home Is a Foreign Place” exhibition by artists Sopheap Pich, Ibrahim El-Salahi, and Mark Rothko.

The International Rescue Committee has also teamed up with museums in the United Kingdom to arrange programming this week focused on the refugee crisis. The Tate is showcasing works by artists who escaped conflict or persecution in its galleries in London, Liverpool, and St. Ives, and, on Friday, a display at the Victoria & Albert Museum in London will spotlight the work of young entrepreneurs who fled crises in other countries.

On Wednesday, The New York Times reported today that more than 70 million people were displaced by conflict last year, the highest figure recorded since World War II. At a press conference at the Met on Monday, Wagstaff said she hopes that, after encountering the interventions at the museum this week, visitors “come away from the galleries with a greater awareness of what the idea of home means in the context of those who cannot return to theirs.”