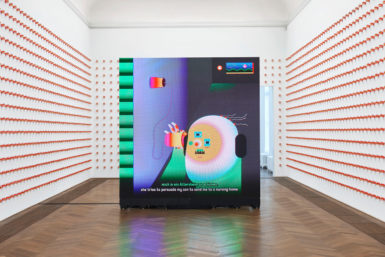 Tanya Bonakdar Gallery, which has locations in New York and Los Angeles, has added Wong Ping to its roster. Currently the subject of a solo exhibition at the Kunsthalle Basel in Switzerland, Wong will have his first show at the gallery in 2020. He is also represented by Edouard Malingue Gallery in Hong Kong and Shanghai.

Wong is one of the most closely watched emerging artists hailing from China. The Hong Kong–based artist memorably showed his extroverted animations at the 2018 New Museum Triennial and in the exhibition “One Hand Clapping,” a survey of work by emerging Chinese artists held at the Guggenheim Museum in New York that same year.

The subject in many of Wong’s films is sexuality and repression in modern-day China, and the roles that digital technology play in the formation of identity within the country. His colorful animations and video installations typically involve absurdist narratives that reference Chinese mythology and politics. Later this year, some of these works will be shown at the Camden Arts Centre in London.