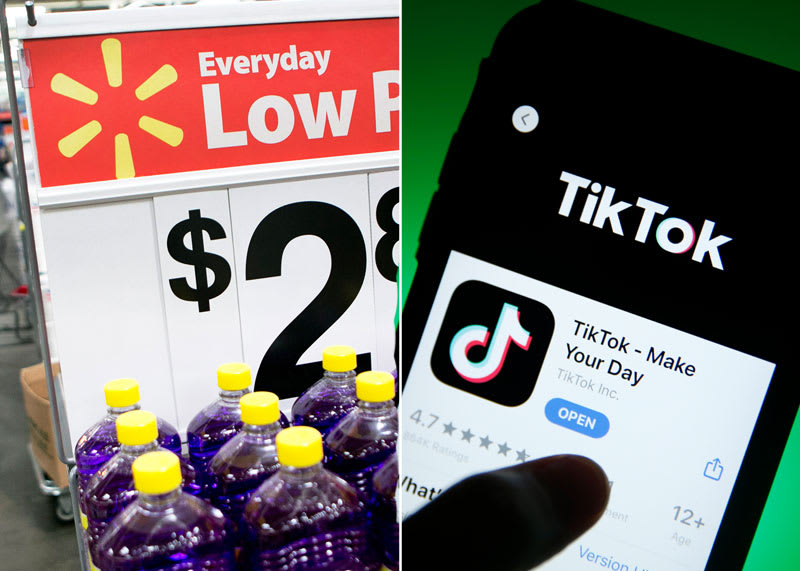 For Walmart, a political tug of war over TikTok has become an opportunity to nab an app with a huge fan following.The company confirmed Thursday that it’s teaming up with Microsoft to buy the tech platform, which is owned by Beijing-based ByteDance.TikTok’s parent company is looking for a buyer after the U.S. government pushed for a ban of the app and alleged the Chinese government could access user data. TikTok has denied those allegations and is challenging the U.S. government in a lawsuit. ByteDance is weighing other offers, including one from Oracle, but could pick the buyer in coming days, according to people familiar with the matter.For some, the big-box retailer — best known for its giant Supercenters and its low prices — may seem like an unlikely buyer for the tech platform of viral videos and numerous teenage users. Yet Walmart’s background as a retailer rather than a tech company may actually give it an edge. Some companies, such as Amazon or Facebook, have been boxed out of the bidding war because they already have a huge tech presence and would raise antitrust concerns.  “For Walmart, it would be a coup to get part of this asset,” said Daniel Ives, managing director and technology analyst at Wedbush Securities. “It really falls into their lap, given the political backdrop.”TikTok fits into Walmart’s broader strategy to expand its reach with customers, collect valuable consumer data and amp up its e-commerce business to fend off Amazon, analysts and industry watchers say. It could also shake up its reputation by affiliating itself with the video platform.Walmart could reach hundreds of millions of consumers with the app. TikTok has about 100 million monthly active U.S. users, an increase of nearly 800% from January 2018, according to a lawsuit filing by the company. TikTok said it has more than 50 million daily U.S. users.By owning TikTok, Walmart and Microsoft could both shake up their reputation and affiliate themselves with an app that’s extremely popular among teens and kids. “This would be really changing the perception of your grandfather’s Microsoft and Walmart,” Ives said.It is unclear how Walmart and Microsoft would structure the deal and how much they’d pay for TikTok. The deal is expected to be in the $20 billion to $30 billion range, sources say. Walmart spokesman Randy Hargrove declined to say how Walmart would split ownership of TikTok or say whether it would be the majority owner.Walmart has made numerous acquisitions of brands known for their online savvy and ability to attract a younger audience. It bought Jet.com for $3.3 billion in 2016 to fuel its e-commerce expansion. It purchased digital natives, including menswear brand Bonobos and plus-size women’s clothing line Eloquii, among others. Some of the companies, including ModCloth, however, it’s bought only to sell them soon after. On Thursday, Walmart confirmed it’s selling two other online brands it acquired: Shoes.com and Bare Necessities.The retailer also has an incubation arm, Store No. 8, that’s based in Silicon Valley. It’s tested new concepts and launched brands.By making a bid on TikTok with Microsoft, Walmart is changing its strategy on content. It’s considered breaking into the video and entertainment business several times before, only to drop those plans. Among them, it bought video-on-demand service Vudu in 2010 for an undisclosed sum — but then sold it to movie ticketing company Fandango this year. About two years ago, Walmart considered starting its own streaming service aimed at “middle America” and held talks with former Epix CEO Mark Greenberg. Walmart decided not to move forward those plans after balking on spending billions of dollars for new content.Walmart’s rival, Amazon, has used original TV and movies as a way to hook customers on its subscription service, Amazon Prime. Walmart confirmed it will launch its own membership program, Walmart+, but has declined to say when it will debut and what perks it will include. TikTok has made a social network out of short videos that often go viral with music, memes, dances and other acts of self-expression. The app has gained a devoted following because of its simplicity and the delight of discovery as its algorithm surfaces random and entertaining videos, said Lauren Kozak, senior advisor of social media, analytics and data-driven marketing for The Diffusion Group, a media research and insights firm.Kozak said Walmart’s pursuit of TikTok makes sense as it tries to transform into more of a tech company and gain a better understanding of young consumers. Yet, she said, if Walmart buys TikTok and tinkers with it, it could drive users away. She said that’s especially true with its young users who “are very sensitive to corporate control and corporate branding.””If they do too much with it, it will ruin TikTok and users will go somewhere else,” she said. “It will kind of gross them out and make them feel like they have a corporate overlord. … It’s possible the very act of them buying it could break it.”— CNBC’s Alex Sherman contributed to this story.Disclosure: Comcast, the parent company of NBCUniversal and CNBC, owns Fandango.