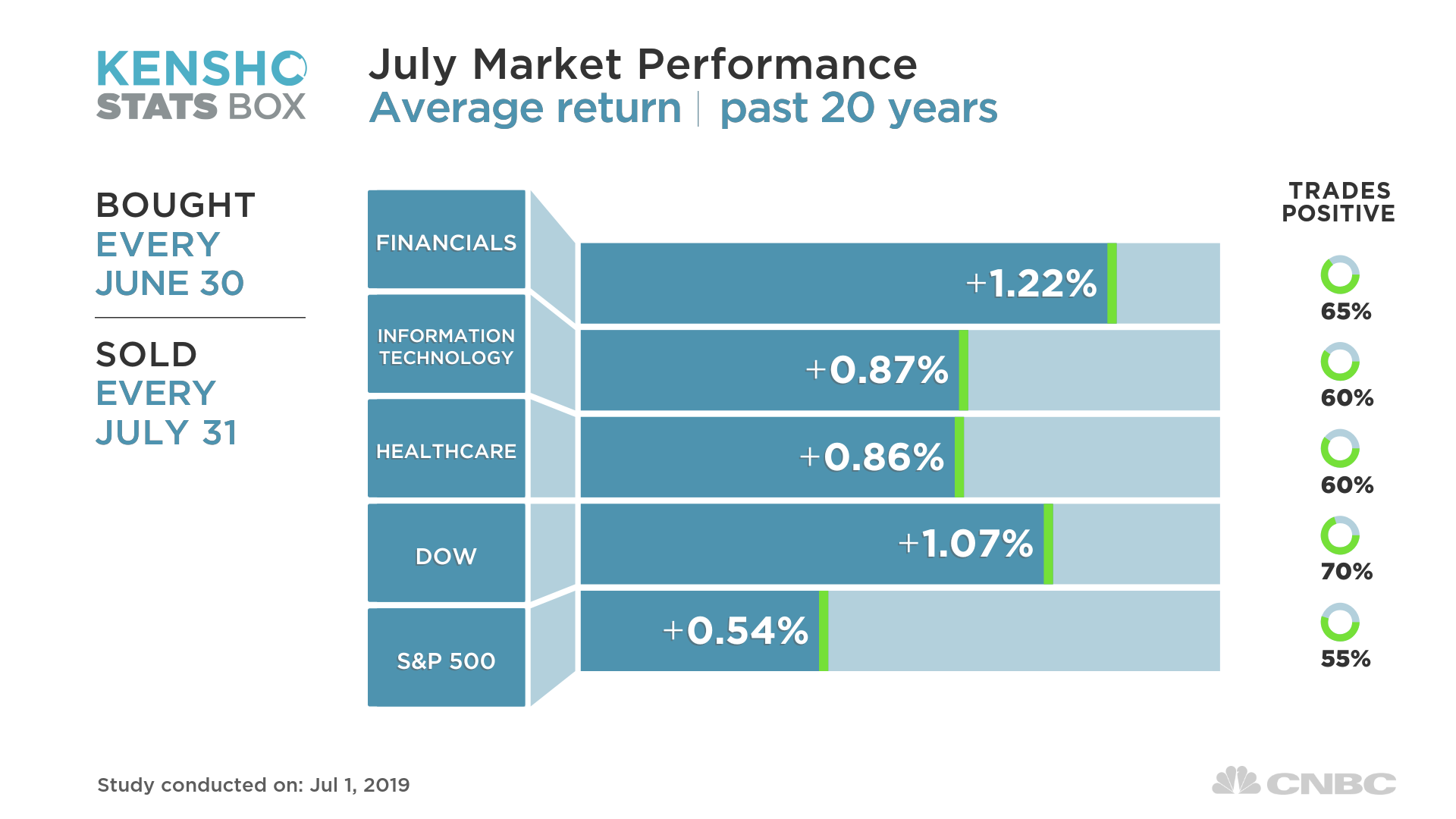 The market opened with more gains across major stock indexes on Wednesday morning — the S&P 500 posted its seventh record close of the year the day before — and trading history suggests July can be a big winner for equities.

Investors are showing some signs of wariness because performance has been so strong already. Stocks surged in the first half of 2019, with the Dow Jones Industrial Average up close to 15% and rallying 7.2% in June, its best monthly performance since 1938. The S&P 500 rose more than 17% in the first half, the best for the index since 1997, and it just notched its best June since 1955.

The run has to end — at some point. This month marks the 121st month of the economic expansion since the financial crisis, the longest run on record going back to 1854. And the July earnings outlook is bad: 77% of companies issuing pre-announcements say their profits will be worse than Wall Street estimates, the second-worst quarter since 2006.

“We still do not see a recession, but we continue to worry more about downside risks than upside risks to the outlook,” Torsten Slok, Deutsche Bank’s chief economist, wrote in an email to CNBC on Tuesday.

What could keep the market rally going?

White House trade advisor Peter Navarro told CNBC on Tuesday that the Dow Jones Industrial Average could rise above 30,000 if the Federal Reserve were to cut interest rates — the market fully expects a rate cut later this month — and the new trilateral trade deal with Mexico and Canada were to pass Congress.

The Dow was notching another small gain on Wednesday morning, trading at 26,845.

“We have the economy weakening a little bit, earnings growth full-year estimates are less than 3% now, we’re going to need a kind of prove-me, a show-me [move], and get a more meaningful breakout to show that this market can really move a lot higher, ” Miller Tabak equity strategist Matt Maley told CNBC’s “Trading Nation. “

Maley and other technical traders are looking for the S&P to hit 3,000 as a sign that it is full speed ahead in stocks — the index reached another record on Wednesday morning, trading above above 2,980 after a gain of 0.3% on Tuesday.

There is a bit of market history that can help keep investor confidence up. July has been historically a good month for stocks. In fact, over the past 20 years, July has been the only month between May and September when the Dow has logged an average gain, with all other months in that period posting average declines, according to a CNBC analysis of market data from Kensho, a machine-learning tool used by Wall Street banks and hedge funds to identify potential trading opportunities from historical market trends.

During summer’s first full month, the Dow trades positively 70% of the time, with an average gain of 1%. The S&P 500 is a positive trade 55% of the time, inching up an average of half a percent.

All 11 of the S&P 500 sectors rose in the first half of the year, with technology stocks now up by more than 28% year-to-date and even the worst-performing sector, health care, posting a gain of 8%.

The top-performing sectors during July, according to Kensho: financials, technology and health care.

The two biggest winners have been the Dow itself and the S&P financials sector.

Walmart’s e-commerce business on track to lose over $1 billion
The flag shirt you’re buying for July 4th is technically illegal
To Top
error: Content is protected !!