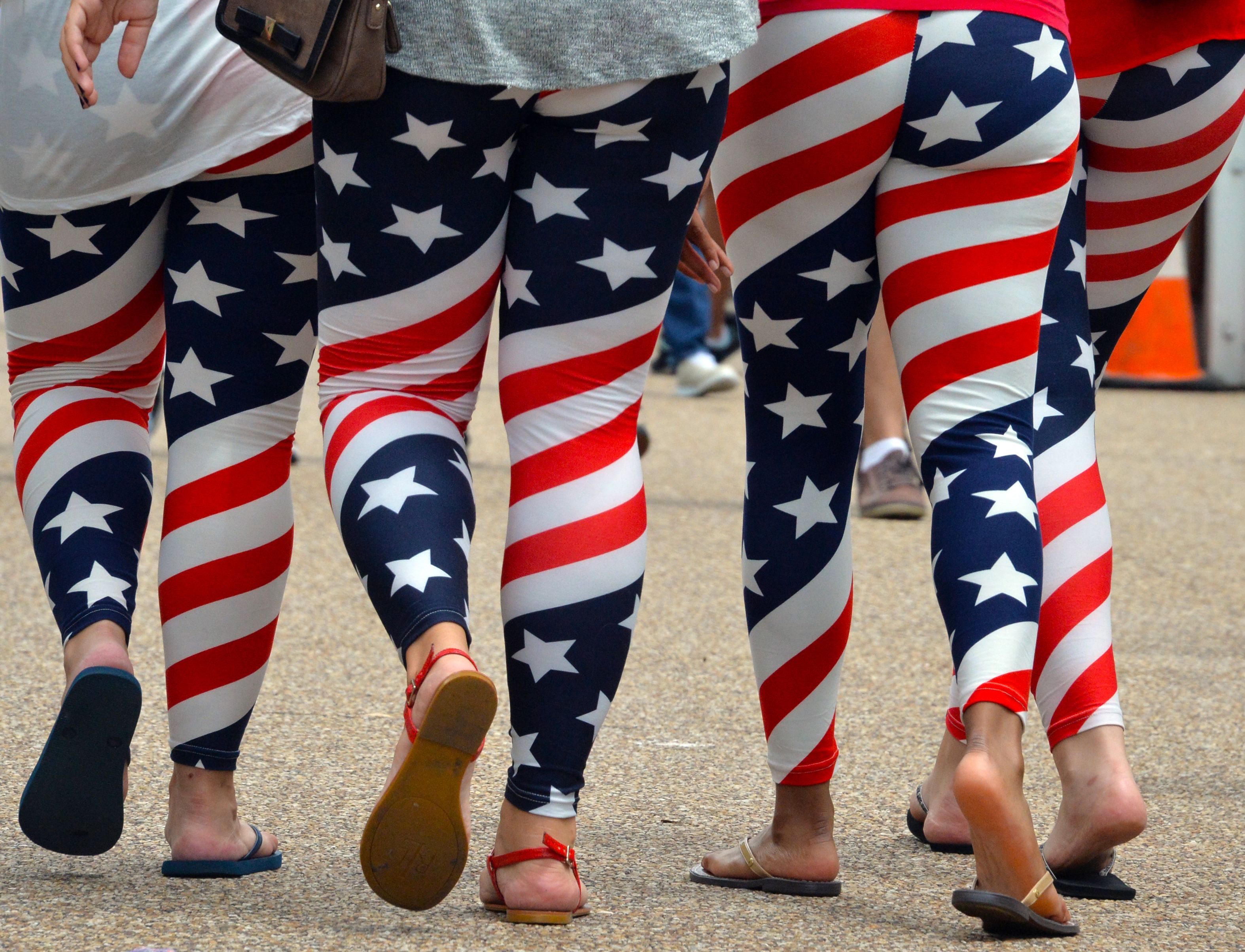 Four young women wear US flag leggings marking the Independence Day as they walk on Pennsylvania Avenue in Washington, DC on July 4, 2015.

Although Nike has recalled its “Betsy Ross” American flag sneakers, shoppers looking for flag-adorned clothing in stores will have plenty of other options, even though the popular trend is technically illegal.

Nike had intended to release a pair of Air Max 1 Quick Strike sneakers for the Fourth of July that featured a 13-star flag, commonly linked to Philadelphia seamstress Betsy Ross, but said Tuesday it halted distribution “… based on concerns that it could unintentionally offend and detract from the nation’s patriotic holiday.”

Colin Kaepernick, a former National Football League quarterback turned activist who has appeared in Nike advertising, told the company the symbol was considered to be offensive because of its links to an era of slavery, according to The Wall Street Journal. Kaepernick has been a polarizing figure in sports after he decided to not stand for the national anthem during a 2016 NFL preseason game in protest of racial injustice.

Nike’s decision was met with criticism that it was engaging in revisionist history, and the governor of Arizona said he would withdraw financial incentives that had been earmarked for Nike to locate a manufacturing facility in the state.

But Nike’s idea for a flag-adorned shoe is very much on trend with fashion as there has been a growing interest in classic apparel that can be worn for a long time. Consumers are buying fewer items of clothing, and apparel with the flag or its colors fits the description of a timeless look.

“There’s a moment right now that we think is attributed to a return to classics,” said Rachel Bennett, a creative director at The Doneger Group. “The flag itself was pretty popular in the 90s, and that’s a moment in time that’s being referenced often.”

Last week, Gap-owned Old Navy unveiled a collection of purple T-shirts with a flag across the front. The color of the shirts is a blend of blue and red, meant to symbolize unity between the country’s political parties. It’s also a nod to the flag tees that Old Navy sold when it was first founded 25 years ago, in 1994.

Tommy Hilfiger also said in June that it would relaunch seven pieces from its 90s collection, with items featuring its iconic flag logo and red, white and blue color panels.

But when shopping for their Independence Day outfits, consumers should also remember a little known fact: Under the U.S. Flag Code, any clothes with the flag on it are technically illegal.

“Every item of apparel that they’re wearing that has an American flag on it: shirt, shorts, bikini, hat, technically is in violation of the flag code,” said Marc Leepson, author of “Flag: An American Biography.”

The federal flag code says that “The flag should never be used for advertising purposes in any manner whatsoever.” In the District of Columbia, a flag being “printed, painted, attached, or otherwise placed a representation” on any “article of merchandise” for the purposes of advertising is a misdemeanor, can lead to a fine of $100 or imprisonment of less than 30 days.

Basically, Leepson said, the image of the flag shouldn’t be used on any commercial items, including apparel.

The code also bans the material of a flag from being converted into clothing of any kind.

“You have to look at it as a series of guidelines,” he said. “There’s no flag police. No one’s going to get arrested.”

Clarification: This story has been updated to specify that one portion of the code is applicable in the District of Columbia, while other portions apply to the U.S.

Why stocks can rally in July past weakest earnings since 2006
Tesla, Merck, Symantec, Canopy Growth & more
To Top
error: Content is protected !!