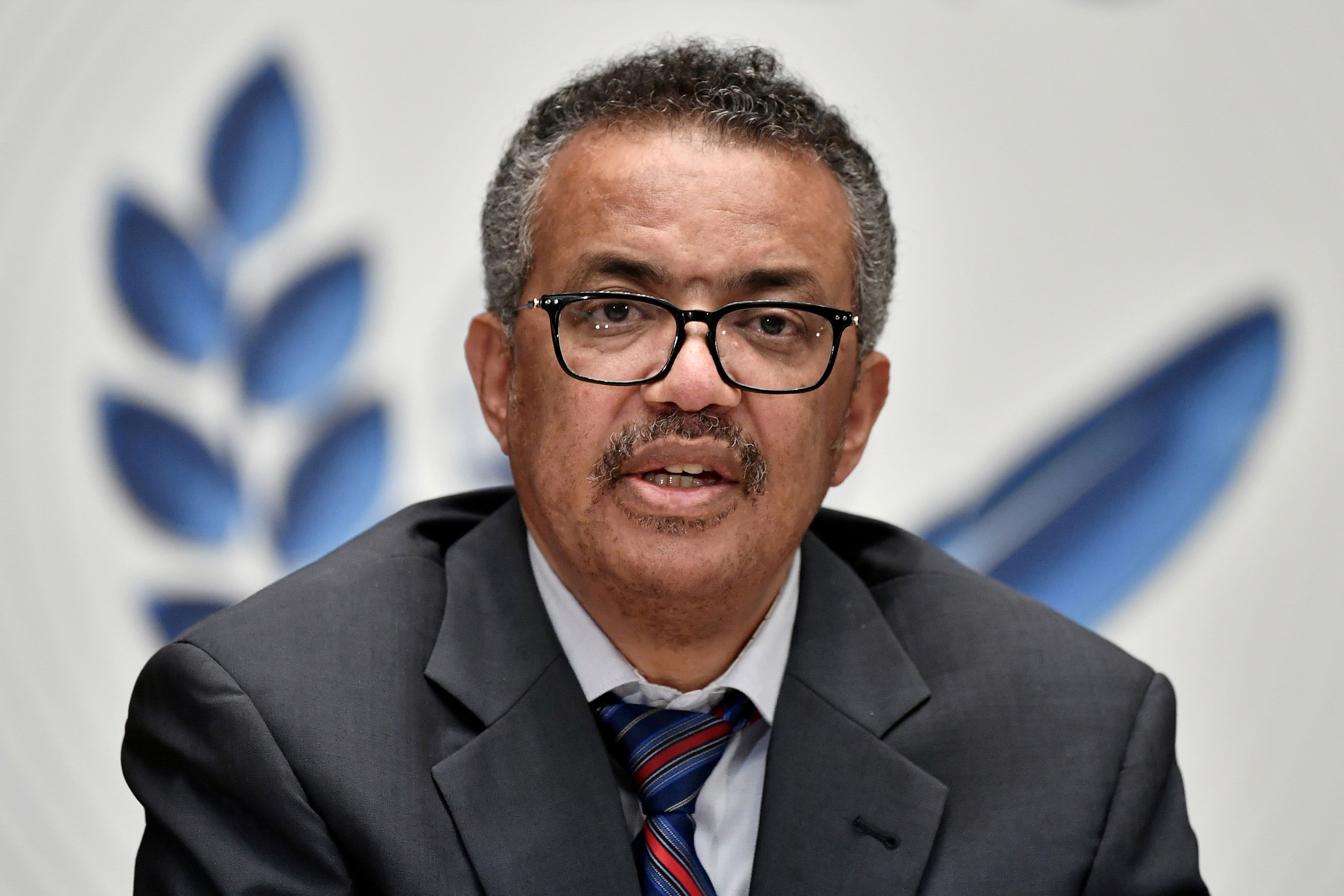 World Health Organization (WHO) Director-General Tedros Adhanom Ghebreyesus attends a news conference organized by Geneva Association of United Nations Correspondents (ACANU) amid the COVID-19 outbreak, at the WHO headquarters in Geneva Switzerland July 3, 2020.Fabrice Coffrini | Pool | ReutersWorld Health Organization Director General-Tedros Adhanom Ghebreyesus on Friday urged other countries, particularly the Group of Seven industrialized nations, to follow the U.S. example and support a World Trade Organization motion to temporarily waive Covid-19 vaccine patent protections.”Wednesday’s announcement by the U.S. that it will support a temporary waiver of intellectual property protections for Covid-19 vaccines is a significant statement of solidarity and support for vaccine equity,” Tedros said at a press briefing. “I know that this is not a politically easy thing to do, so I very much appreciate the leadership of the U.S. and we urge other countries to follow their example.”The U.S., which is a strong advocate for enforcing intellectual property rights worldwide, previously opposed waiving patent protections for Covid vaccines.President Joe Biden personally made the decision to change the U.S. stance, White House deputy press secretary Karine Jean-Pierre told reporters aboard Air Force One on Thursday. Biden had supported waiving Covid vaccine intellectual property rights as a presidential candidate.The Pharmaceutical Research and Manufacturers of America – whose members include vaccine makers AstraZeneca, Pfizer and Johnson & Johnson – strongly opposes the Biden administration’s decision.WHO chief Tedros also called Friday for the G-7 industrialized nations – Canada, France, Germany, Italy, Japan and the U.K in addition to the U.S. – to do more to facilitate the equitable distribution of Covid vaccines worldwide.”For G-7, now the most important and immediate support we need is vaccines, vaccine equity,” Tedros said. “I think everybody knows what we should do to increase the production capacity and then increase vaccination coverage in all countries.”According to the WHO chief, more than 80% of the more than 1 billion Covid vaccine doses distributed worldwide have gone to high-income countries, while low-income countries received 0.3%.”This kind of divide is unacceptable,” Tedros said. “It’s unacceptable not just because of a moral issue but it’s unacceptable because we will not defeat the virus in a divided world.””It’s in every country’s interest in this world to share vaccines and to help in any way possible to ensure vaccine equity,” the WHO chief said. “Vaccine equity is not charity. Vaccine equity is in the interest of everybody.”The push to waive patent protections, proposed by India and South Africa in October of last year, faces an uphill battle at the WTO, which makes decisions through consensus among its 164 member nations.Germany, Europe’s largest economy, has come out against the push to temporarily waive vaccine patents. BioNTech, which developed a Covid vaccine in partnership with Pfizer, is based in Germany.”The US proposal to remove patent protection for Covid-19 vaccines has significant implications for vaccine production as a whole,” a German government spokesperson said Thursday. “The limiting factor in vaccine production is production capacity and high quality standards, not patents.”The governments of Canada, Italy, Japan and the U.K. have not adopted clear public stances for or against waiving IP protections in the wake of the U.S. reversal. French President Emmanuel Macron has backed the U.S. position.European Commission President Ursula von der Leyen – who heads the European Union’s executive body – did not embrace the waiver plan, saying in a speech she is “ready to discuss any proposals that address the crisis in an effective and pragmatic manner.”Russia, which developed the Sputnik vaccine, expressed support for the move and China is open to further discussion. The WHO announced Friday that it has approved the vaccine developed by China’s Sinopharm for emergency use.About 80 countries in the WTO, largely developing nations, have expressed support for the proposal, according to The Associated Press, which cited a Geneva-based trade official.”It’s also important to remember that intellectual property waivers will need to be accompanied by transfers of technology and know-how for these difficult to make vaccines,” Tedros said.

Adidas upgrades outlook for 2021 with sales expected to grow almost 20%
Cramer’s week ahead: The stock market can keep climbing ‘now that the Fed remains our friend’
To Top
error: Content is protected !!