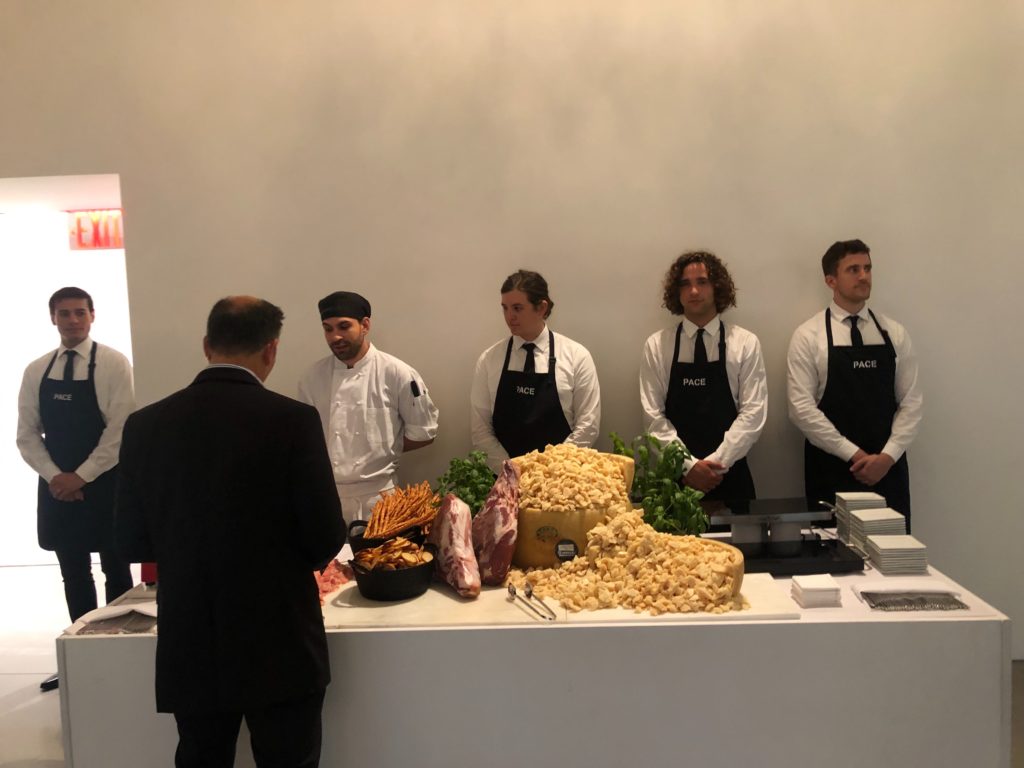 The appetizers were overflowing.ANNIE ARMSTRONG/ARTNEWS
Last night at the opening of Pace’s huge new global headquarters in Chelsea, as the Ruinart was flowing, the lips became looser. Decorated guests of the gallery danced to a musical performance by The Who and DJing by Questlove, admired eight-stories of art, ate barbecue, and, of course, gossiped. ARTnews asked, “What’s the craziest experience you’ve ever had at an art opening?”
Chum Langhorne, screenwriterAt one opening I met the bassist from Metallica and we became friends, which was so exciting for me. I think it was Gagosian? I can’t really remember. I was just kinda standing there and started talking to him…then I put it together. He was not in metal mode! He was wearing glasses and had short hair.Howard Lutnick, chairman and CEO of Cantor Fitzgerald and BGC Partners, and art collectorEarlier tonight, at Paul Kasmin Gallery, I was talking to a friend of mine, Debbie, and she’s chatting with me, and I go, “Debbie, do you want to meet my friend?” She says sure. Then I go, “Debbie, this is Frank Stella.” She was shocked. If you know Frank, he dresses really down. He was wearing a baseball hat and like the crappiest clothes ever. [Looking out into the crowd] He’d be 100 times under-dressed for this group.Lacey Dorn, actressWalking into a transformed Marlborough Gallery in London for Jonah Freeman and Justin Lowe’s installation, and not recognizing where I was or what planet I was on.Questlove, musician and DJI was at Art Basel and watched a power couple’s then-three year old, weirdly named, kid kinda run a little rampant, like a bull in a China shop, at an art opening. Yeah, he broke some stuff. The kid knocked over—it wasn’t a vase but it was like a glass sculpture piece and it broke in three. And this was like a priceless piece. I think who really got chewed out was the gallery themselves because they were supposed to secure it. A close second was one time my bass cabinets shook an art piece loose. Kanye West masters his albums too loud…Christian Rosa, artistI had a friend in Vienna that lost a bet and he had to take his pants off and order a drink at the bar.Chandelier sculptures by Fred Wilson provided ambience. ANNIE ARMSTRONG/ARTNEWS
Yvonne Force Villareal, co-founder of Art Production FundI was at Art Basel in Miami and I kept seeing this woman, and I was like “She looks fantastic.” She had this like Mad Max kind of glamour. I thought, I love her. Then two days later, we’re at a Deitch/Gagosian opening, and Jeffrey [Deitch] introduced me to her! In that moment, we became very close friends, and we still are.Arden Wohl, filmmakerAt the Freeman Lowe bunker in Ohio, underground. I mean, Jonah [Freeman] is my husband, but it was the most mind-blowing show I’ve ever seen.Federico Castro Debernardi, collector and founder of Fundacion Arte in Buenos AiresKlara Lidén’s Christmas tree installation at Reena Spaulings. She picked up all the Christmas trees that were discarded after the sixth of January and put them inside the gallery. The smell was so intense.Chuck Close, artistI’ll get back to you. [Editors note: He didn’t]Monique Pean, jewelry designerThe time when I met a kindred spirit, Tavares Strachan and realized he was the only other person I’ve met under the age of 30 who’s travelled to the Arctic Circle, as I have. It was kind of like meeting a long lost sibling. I work with fossils and dinosaur bones, and I have a fascination with temporality and the natural world, as does Tavares.Lisa Schiff, art advisorI mean seeing The Who. That’s, like, my whole childhood! Other than that, whatever it is, it’s dirty.Oh, though, about twenty years ago I was driven to a spot where there were rats and I was dropped off. I went inside and it was Banksy. There were some of his paintings for sale, but I had to go in and walk among these rats. This was in London and it was terrifying.Anonymous (employee of the catering company)I don’t know if there’s anything that wild, but people just always get wasted. I’ve never seen anyone barf, but pretty close to it. I worked at a gallery in the Lower East Side for a little, and it was just the same cast of people coming out and get plastered. I’d always get stuck in a conversation with them about, like, ‘80s New York.Alessandro Francalanci, designerI dropped a glass and it shattered everywhere. But I looked pretty good, so I got away with it.Karine Haimo, director at Metro Pictures GalleryWell, I used to work [at Pace] for five years. One time I got stuck in an elevator for 20 minutes.Keith Coventry, artistNothing really, they’re quite boring compared to what happens when you’re just walking around the street. The parameters of an art opening are fairly prescribed, aren’t they?