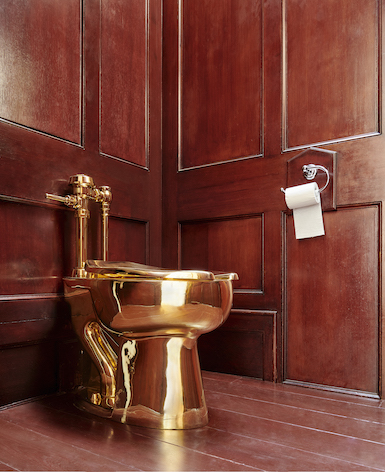 Maurizio Cattelan, America, 2016, installation view at Blenheim Palace, London.TOM LINDBOE/COURTESY BLENHEIM ART FOUNDATION
Just a few days after it went on view to the public in London, Maurizio Cattelan’s 18-karat golden toilet has gone missing.
In a statement posted on Twitter on Saturday morning, Blenheim Palace said that Cattelan’s America (2016) has been “stolen” from its current exhibition of the artist’s work, which opened on Thursday and is scheduled to close on October 27. On its website, Blenheim Palace said it was closed for the day, following what it described as an “unforeseen incident.”Edward Spencer-Churchill, the founder of the Blenheim Art Foundation, which mounted the show, said in a statement, “We are shocked and saddened by this news and are working with the Police to restore the artwork to the exhibition as soon as possible.”A representative for the Blenheim Art Foundation said that it did not have a comment from Cattelan.Cattelan’s current show at Blenheim Palace, “Victory Is Not an Option,” features a number of new works, including a 39-foot-tall replica of the arm of a Joan of Arc sculpture in Paris and an installation of Union Jack flags that line a walkway. The palace’s presentation of America, which appeared briefly in an 18th-century domestic setting that clashed with the sculpture’s golden sheen, had been one of the show’s most touted pieces. According to NBC News, the toilet is valued at $1 million.America debuted in 2016 at the Guggenheim Museum in New York, following a five-year period in which Cattelan produced no new work. In its initial presentation, the toilet was functional. During its eyebrow-raising first showing, Guggenheim curator Nancy Spector offered to lend the work to the White House, after explaining that the museum couldn’t loan a prized Vincent van Gogh work that cannot travel. (The White House declined her offer.)On Twitter, Blenheim Palace said, “We are saddened by this extraordinary event, but also relieved no-one was hurt.” The palace said local police were investigating the theft and urged people to come forward with leads. Hours later, the Guardian reported that a 66-year-old man had been arrested in connection with the theft.Dominic Hare, the CEO of Blenheim Palace, said in a statement, “We hope against hope that we can recover this precious work of art. It is deeply ironic that a work of art portraying the American Dream and the idea of an elite object made available to all should be almost instantly snatched away and hidden from view. We hope that the wonderful work of our dear friend Maurizio Cattelan becomes immortalized by this stupid and pointless act.”