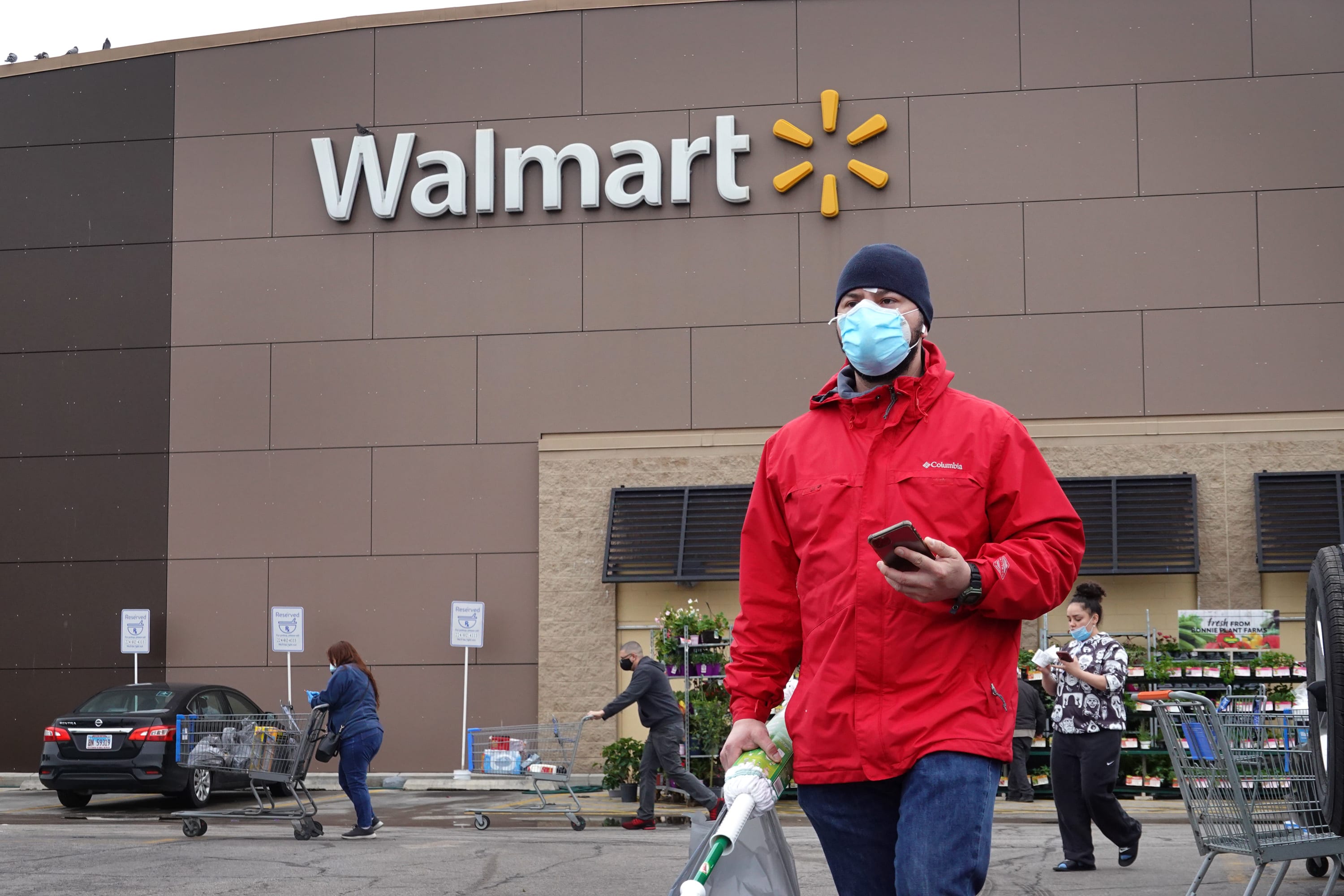 Customers shop at a Walmart store on May 19, 2020 in Chicago, Illinois. Walmart reported a 74% increase in U.S. online sales for the quarter that ended April 30, and a 10% increase in same store sales for the same period as the effects of the coronavirus helped to boost sales.Scott Olson | Getty ImagesWalmart beginning Saturday is resuming monitoring and counting the number of customers entering its stores, to make sure it doesn’t exceed capacity limits, as coronavirus cases surge at record rates across the country.Dating back to April, Walmart has been restricting the number of people in its big-box stores to not exceed five customers per every roughly 1,000 square feet, or about 20% of a store’s capacity. Those levels can also vary based on local mandates, the company said.For a period of time, however, the biggest retailer in the United States had stopped physically counting people as they came inside and left.”We know from months of metering data in our stores that the vast majority of the time our stores didn’t reach our self-imposed 20% metering capacity,” a Walmart spokesman told CNBC in an emailed statement. “Out of an abundance of caution, we have resumed counting the number of people entering and leaving our stores.”The move comes as America continues to push new Covid records. More than 68,500 are hospitalized with Covid-19 across the country, more than at any other point during the pandemic, according to data from the COVID Tracking Project, which is run by journalists at The Atlantic.And cases continue to rise. Over the past seven days, the U.S. has reported an average of over 139,900 cases per day, up more than 35% compared with a week ago, according to a CNBC analysis of data compiled by Johns Hopkins University. The seven-day average of daily new cases has hit a fresh record everyday for at least the past ten days, Hopkins data shows.Major grocery chains have now started reinstating purchasing limits on certain items, such as toilet paper and hand sanitizer. In the spring, when the pandemic arrived in the U.S., frantic consumers flocked to stores, stockpiled, and left shelves barren of grocery staples like canned beans and frozen veggies. The industry referred to the reaction as “panic buying.” Many retailers were unprepared for the surge in spending on necessities.Kroger and Florida-based Publix Super Markets earlier this month reinstated buying limits on bath tissue and paper towels.Giant Food, an American supermarket chain that operates locations across Pennsylvania, Maryland, Virginia and West Virginia, is again limiting purchases of toilet paper and paper towels.Wegmans has placed limits on paper towels, household cleaners and disinfecting wipes.Retailers and grocers must now navigate the pandemic during the holiday season, which tends to draw more people to stores to buy gifts and ingredients for family dinners.In an effort to spread out customers’ holiday visits, Walmart has said it will still have in-store Black Friday sales, but the company is breaking them up into three different sales events.—CNBC’s Will Feuer contributed to this story.

Reach the managed inbox with a proactive approach to email deliverability

Gottlieb says worst of outbreak will pass by January

Learn how to target adjacent markets with smart risk-taking