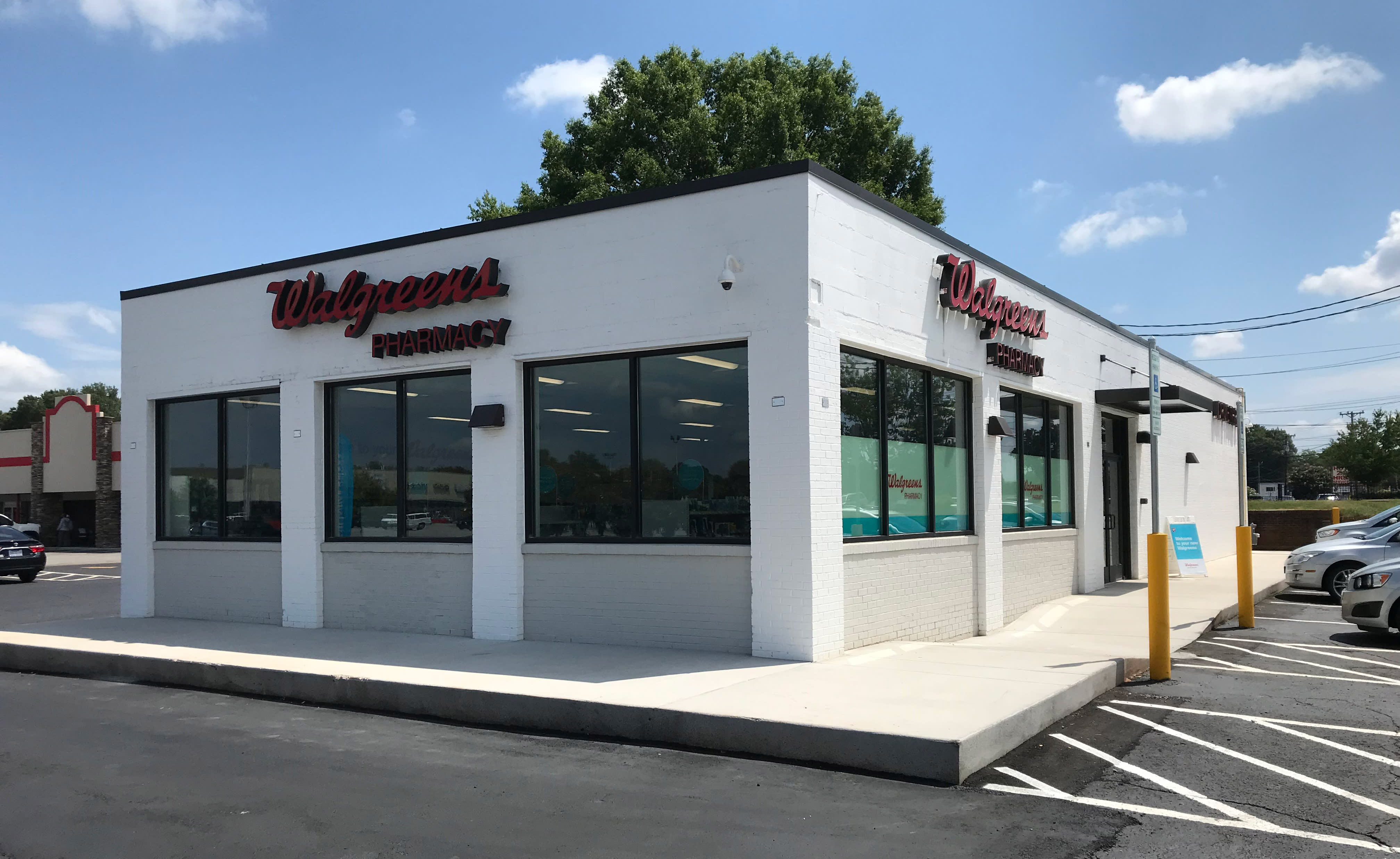 Walgreen Stores in Lexington Park, MD.Source: WalgreensWalgreens has rolled out a new kind of store that shrinks down its square footage and focuses on the pharmacy.Expect to see fewer front-of-store items, a slimmed down selection of over-the-counter medications and an emphasis on relationships between pharmacists and customers.It has opened more than 30 small-format pharmacies as part of a pilot, and it may open additional ones depending on how the stores perform. Inside of the company, the project was dubbed “Cooper” — a reference to the Mini Cooper, a small BMW car with a cult following.  Walgreens Boots Alliance is testing new approaches as its competition grows. Sales in fiscal 2019 rose 4.1% to $136.9 billion, but adjusted earnings per share fell 0.5%. Along with feeling the heat from CVS Health and other drugstores, Walmart and Amazon are both expanding their health care focus. Walmart has opened four clinics that offer a broad array of services at a low price, including primary care and dental care, in addition to the pharmacies it has at many of its big-box stores. Amazon bought PillPack two years ago, laying the foundation for the company to expand into pharmacy.Walgreens is balancing its investment with cost-cutting efforts that have included layoffs and hundreds of store closures. Shares of Walgreens, which have a market value of $36.7 billion, are down 29% since the start of the year. The company’s drugstores initially saw a sales surge during the pandemic, as people stocked up on essentials and prescriptions, but that dropped off with stay-at-home orders.Walgreens has turned some of its more than 9,200 U.S. stores into “neighborhood health destinations” — a term it uses to describe locations with health care services along with a pharmacy. In some stores, it rents space to diagnostics company LabCorp, optical company For Eyes and weight loss company Jenny Craig. It has 14 locations that offer primary care through agreements with third-party companies, such as Village MD. More than 230 of Walgreens’ stores have clinics run and staffed with a nurse practitioner from a health system.Walgreens’ group vice president of pharmacy operations Rina Shah said the company wanted to move away from a “one-size-fits-all approach” and tailor store offerings more to a community and nearby customers. She said the small-format pharmacy was inspired in part by Walgreens stores near health care systems that are smaller in size and cater to customers picking up medication after getting discharged from the hospital.In early 2019, it began testing the small-format pharmacies. It now has the stores in a variety of small towns and large cities across the country, including Mobile, Alabama; Greenville, South Carolina; Schenectady, New York; Bethesda, Maryland; Indianapolis, Indiana; Jacksonville, Texas and Knoxville, Tennessee.Walgreens store in Winston-Salem.Source: WalgreensSlimmed down selectionSmall-format pharmacies are about a quarter of the size of the Walgreens’ typical store, which average about 13,500 square feet. The stores have a more open concept and get daily deliveries, so they have less stock in the back.Inside of stores, customers won’t find the typical vast selection. Instead, they’ll notice a sharper focus on health and wellness products like vitamins, over-the-counter medications, thermometers and Band-Aids, Shah said.She said it’s changed the mix of products, depending on what customers want. For example, at one store, it expanded the section of cough and cold medications. Stores have a limited assortment of drinks in a small cooler and snacks, including healthy options like veggie chips, peanuts, pretzels and popcorn.Walgreens store in Winston-Salem.Source: WalgreensPharmacy focusPharmacists play a central role in the new kind of store — and Walgreens hopes that personalized care will ultimately lead to better health outcomes, Shah said. She said the company sees the smaller stores as a place where more people can have one-on-one conversations with pharmacists, particularly those taking multiple medications or with complex and chronic conditions. “These stores are really intended to provide a high-touch experience, and even a convenient experience, to our patients in a different capacity than potentially a very busy 24-hour location where people are coming in and out,” she said.So far, she said Walgreens has gotten positive feedback from patients and doctors about the “hands-on approach.” She said it’s noticed early signs this style has increased patient adherence, or the number of people who follow medical advice and take their prescription correctly.Along with filling prescriptions, the pharmacies also offer vaccinations like the flu shot, she said. A Walgreens store in Houston, TX.Source: WalgreensDrive-thru optionLike many other Walgreens stores, the majority of the small-format pharmacies have a drive-thru where customers can zip through and pick up items instead of parking and coming inside. That option has gained popularity during the coronavirus pandemic, Shah said. The majority of Walgreens’ stores in the U.S. have drive-thrus.Walgreen Stores in Lexington Park, MD.Source: WalgreensAnswer to ‘pharmacy deserts’?Shah said the company is testing the small-format pharmacies in diverse locations, including urban, suburban and rural areas. Even as people order prescriptions online or get them delivered to their door, Shah said brick-and-mortar locations still play an important role. “The value of pharmacy is not so much the prescription that you take,” she said. “It’s understanding how to take the medication, what side effects you need to manage and then ultimately, how do you manage your disease going forward.The company considers a variety of factors when deciding where to open the stores, such as whether there’s a need for more pharmacies and greater health care access, Shah said. “Every customer and every marketplace is a little different, so we’re just looking to understand exactly where would this fit,” she said. Those include “pharmacy deserts,” where customers don’t have a nearby place to pick up prescriptions.”That’s an environment where a small-format pharmacy may fit in really well, ” she said.

China says its factory activity expanded in June but headwinds remain
Fauci says U.S. coronavirus outbreak is ‘going to be very disturbing,’ could top 100,000 cases a day
To Top
error: Content is protected !!