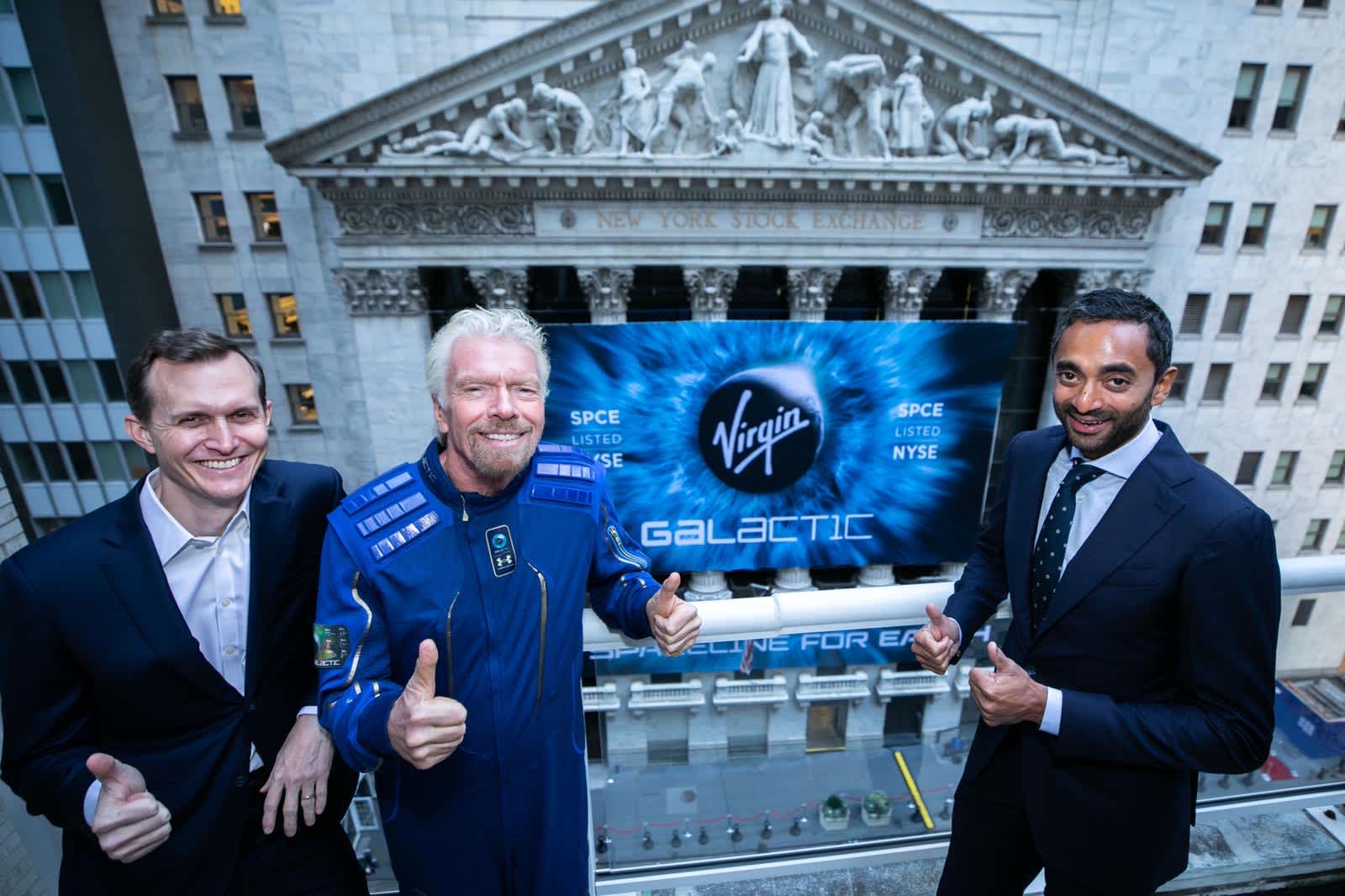 Virgin Galactic leaders in front of the New York Stock Exchange, from left: CEO George Whitesides, founder Richard Branson and Chairman Chamath Palihapitiya.Virgin GalacticBillionaire investor Chamath Palihapitiya, the chairman of Virgin Galactic who took the company public through a SPAC deal in 2019, sold his remaining personal stake this week, a securities filing disclosed.Shares of Virgin Galactic dropped as much as 18% in Friday’s trading from its previous close of $30.30 a share. The company’s stock, down more than 30% this week alone, has lost more than half its value since hitting an all time high of $62.80 in early February.The shares remain barely positive since 2021 began, up about 2%. The stock’s year to date gains reached about 165% when it hit its all time high.Palihapitiya sold about 6.2 million Virgin Galactic shares on Tuesday and Wednesday, worth about $213 million at the average selling prices.He still indirectly owns about 15.8 million shares through Social Capital Hedosophia Holdings — the special purpose acquisition company that he formed with investor Ian Osborne.Palihapitiya, in a statement to CNBC, said that he plans to redirect the sale “into a large investment I am making towards fighting climate change.””The details of this investment will be made public in the next few months. I remain as dedicated as ever to Virgin Galactic’s team, mission and prospects,” Palihapitiya said in the statement.Virgin Galactic’s carrier jet and spacecraft prepare to takeoff from Spaceport America in New Mexico on Dec. 12, 2020.Virgin GalacticPalihapitiya in December sold about 3.8 million shares of his stake in Virgin Galactic. At the time, Palihapitiya said he sold the shares “to help manage my liquidity as I fund several new projects starting in 2021.””I remain committed and excited for the future of SPCE. Just wanted to be transparent,” Palihapitiya said in a tweet.His latest sales come a week after Virgin Galactic revealed further delays to its spacecraft testing program, saying it now does not expect commercial flights to begin until early 2022. When Palihapitiya’s SPAC merged with Sir Richard Branson’s company, Virgin Galactic said it expected commercial spaceflights to begin by the summer of 2020.Additionally, former Virgin Galactic CEO George Whitesides is stepping down as chief space officer, a spokesperson told CNBC on Wednesday. Whitesides, who last year stepped aside as CEO for former Disney executive Michael Colglazier, plans to explore opportunities in public service, the company said.Whitesides will remain as chair of Virgin Galactic’s Space Advisory Board, and he and his wife hold spaceflight tickets bought in 2005.Subscribe to CNBC PRO for exclusive insights and analysis, and live business day programming from around the world.