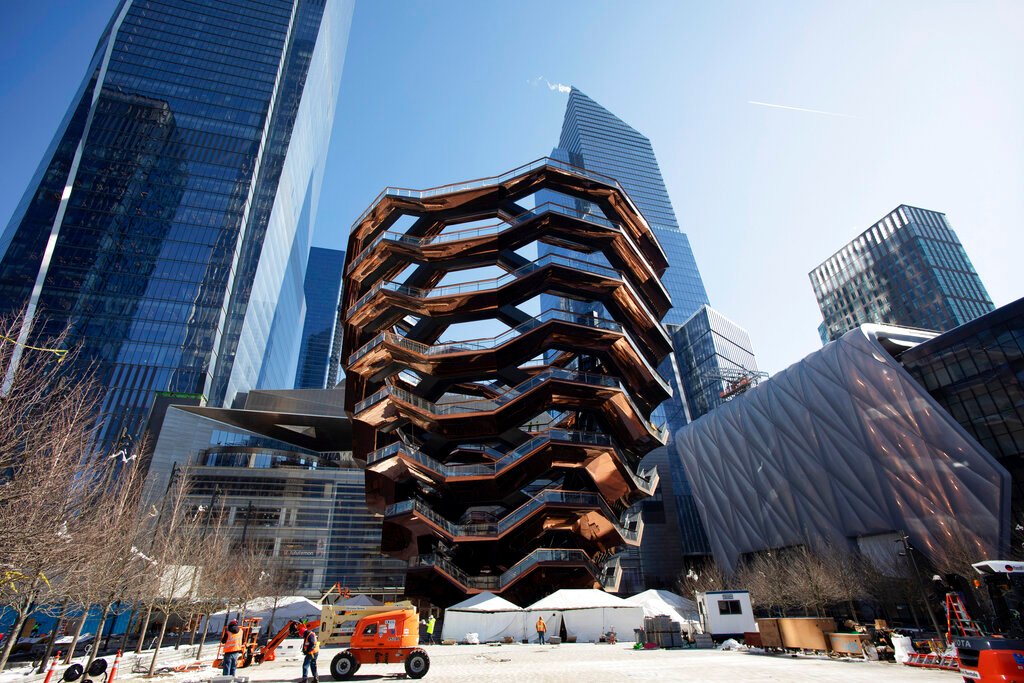 To receive Morning Links in your inbox every weekday, sign up for our Breakfast with ARTnews newsletter.
The Headlines
ANOTHER TRAGEDY AT THE VESSEL. On Thursday, a teenager jumped to his death from Thomas Heatherwick‘s giant Manhattan sculpture while visiting with family, the New York Daily News reports. It is the fourth suicide at the structure, which adopted new safety measures earlier this year. “We thought we did everything that would really prevent this,” Stephen Ross, the work’s developer, told the Daily Beast. Lowell Kern, chair of Community Board 4, told the website that “is just not true. They could have raised the height of the barriers, and that would have prevented this tragedy.” The attraction will be closed, Ross said, while staffers decide whether to reopen it. In other Heatherwick news, the designer said he is not working on a U.K. Covid memorial . Recent reports had him meeting with officials about such a project. In a statement obtained by Dezeen, his studio said, “As designers who have experience creating moments of national significance, we were approached in an advisory capacity.”

IT IS NOT AN EASY TIME TO BE RUNNING A MUSEUM. In a sign that the Delta variant may further complicate art-viewing protocols, the director of Boston’s Institute of Contemporary Art, Jill Medvedow, told Boston Public Radio that area museum directors are mulling a return to mandatory masking, in accordance with CDC recommendations. On the plus side, Medvedow said that they do not anticipate having to close again. “I think that we are all so lucky to live here in Massachusetts with our high vax rates, and the constant shared information and data, so that does build a lot of confidence,” she said. Across the United States, museum masking rules vary. France and Italy have recently announced rules to require proof of vaccination or a negative test to access cultural programs. Some U.S. states have have barred such a move.
The Digest
While legislation has authorized the creation of a National Museum of the American Latino in Washington, D.C., much remains up in the air about its eventual size, scope, and location. On such matters, the Smithsonian Institution will have the final say, and lobbying is underway. [The Washington Post]

With an eye toward the future of her gallery, the legendary art dealer Marian Goodman, 93, has named five partners, including the former museum director Philipp Kaiser, whom she also tapped to be president. Goodman is taking on the title of CEO. [ARTnews]
The new CEO of the banking firm UniCredit, Andrea Orcel, is nixing his predecessor’s efforts to sell off its sprawling art collection to support social programs and emerging artists. The financial giant owns some 60,000 works. [Bloomberg]
After stepping down as director of the Dallas Museum of Art because of a chronic illness, Bonnie Pitman resolved to do something new every day, a practice that changed her life. She is now director of Art-Brain Innovations at the University of Texas at Dallas’s Center for BrainHealth. [Texas Monthly]
Fortune magazine has created a “NFTy 50” ranking of the most influential figures in the wild world of non-fungible tokens. Number one, naturally, is the artist known as Beeple. [Fortune]
A slice from one of the 23 official cakes served to celebrate the wedding of Prince Charles and Princess Diana 40 years ago is going up for sale at Dominic Winter Auctioneers in South Cerney, England. Its high estimate is about $700. [Associated Press]
The Kicker
ONE DAY, HUNTER BIDEN WILL NOT BE IN THE NEWS. Today is not that day. The artist and presidential son stopped by the Nota Bene podcast, and he had plenty to say, as controversy swirls around his budding art career: “I think I’m the most famous artist in the MAGA world,” for one thing. (Page Six has a recap  of the action.) Some have questioned the huge prices (up to $500,000!) that his dealer, George Bergès, plans to charge for his work. Biden defended the effort he has put into his artistic practice, while acknowledging “the unfair advantage of my whole life at different levels.” He said, “I don’t do this lightly and I don’t do it without the knowledge that there are so many incredible artists that never get the chance to find a gallery or to share their art.” [Page Six]
Thank you for reading. We’ll see you on Monday.

Can the Weaknesses of NFT Technology Be Fixed?
Phillip King, Influential British Sculptor, Has Died at 87
To Top
error: Content is protected !!