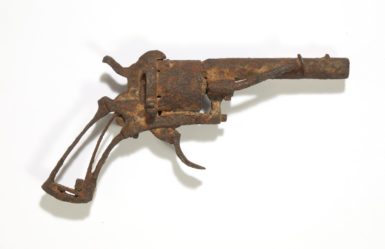 “The sadness will last forever.”

According to Vincent Van Gogh’s brother Theo, these were the final words uttered by the painter before his death on July 29, 1890, which stemmed from an untreated infection likely caused by a self-inflected gunshot wound two days earlier. Van Gogh’s sadness may be eternal, but today, thanks to the Parisian auction house Remy Le Fur & Associates, one presumably happy bidder was able to purchase the 7mm pocket revolver the artist is thought to have used for his attempted suicide. The final price on this rusted-out monument to mental illness? €162,000 (about $181,600), surpassing the auction house’s pre-sale estimate of €40,000 to €60,000 ($44,900–$67,300).

The gun was shown in 2016 as part of the exhibition “On the Verge of Insanity. Van Gogh and his illness” at the Van Gogh Museum in Amsterdam. According to the auction house, it was recovered in the artist’s final resting place of Auvers-sur-Oise in the South of France around 1960 by a farmer, who then gave it to the mother of the person who put it up for sale.

The origin of the gun was investigated by the writer Alain Rohan in his 2012 book Did We Find the Suicide Weapon? In the book, Rohan presents arguments in favor of its authenticity: its caliber matches the bullet retrieved from van Gogh’s body, scientific studies show that the gun had been in the ground since the 1890s, and it is a lower-power gun, which could potentially explain the artist’s prolonged death.

There is an alternate theory related to van Gogh’s death that skirts suicide entirely: in 2011, two American researchers theorized that he was the victim of an accident at the hands of two children involving a firearm. The auction house points out that even if this theory is correct, though, the weapon up for bidding could still very well be “the gun.”