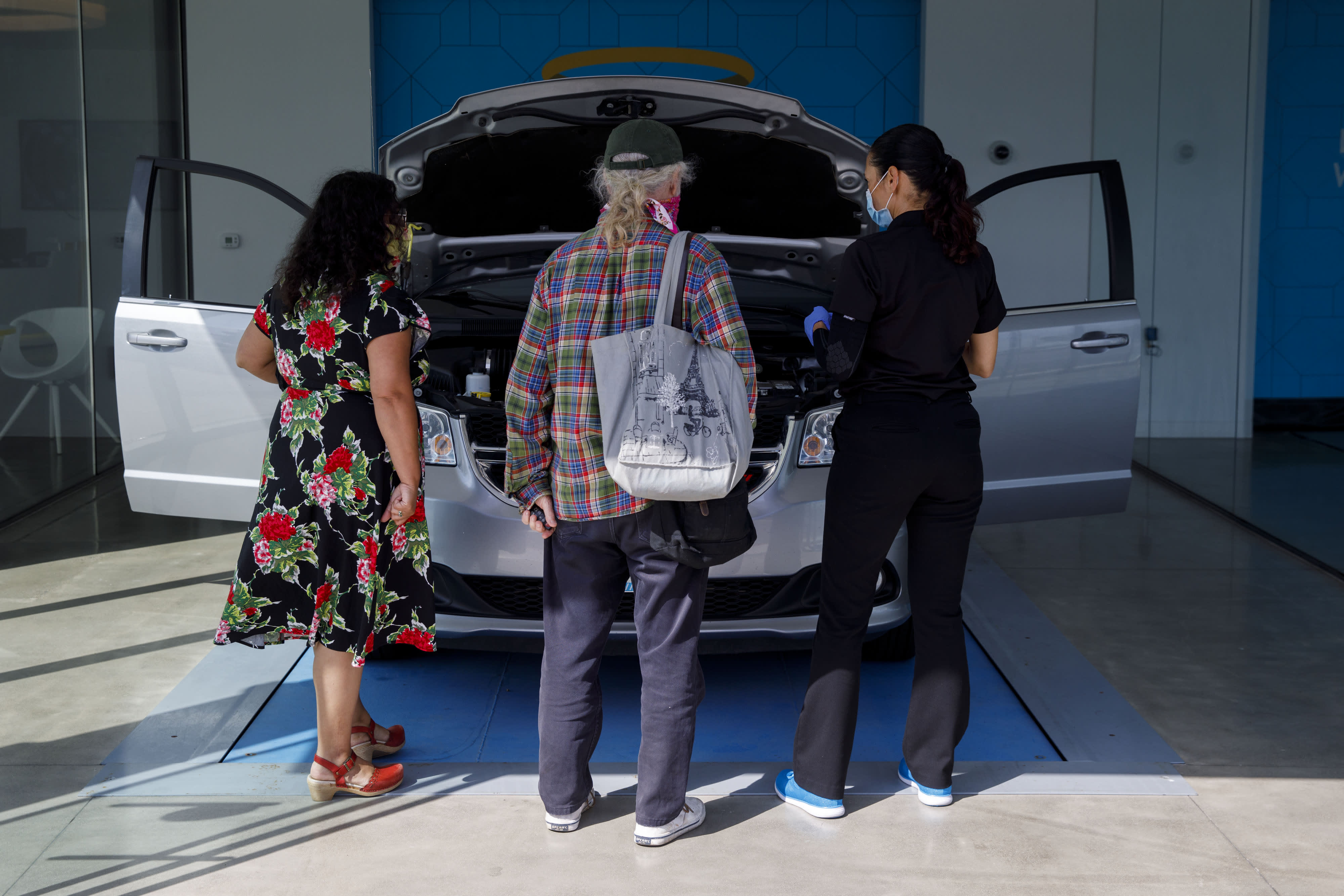 If you’re waiting for used car prices to drop, and reading recent indications as a sign the pricing decline already has begun, one of the biggest sellers of used cars in the U.S. says you should not get too excited.The rise in used car prices will likely not slow down until manufacturers can start producing cars at pre-pandemic rates, according to the CEO of Carvana.”[Used car sales] volume is pretty consistent with 2019, it hasn’t changed that much — what’s materially different is just that there are so many fewer new cars being manufactured and that’s pushing prices up.” Ernie Garcia, Carvana chief executive officer, said on CNBC’s “Squawk Box” on Friday. “I think until the supply chains at the [original equipment manufacturers] get figured out there’s likely to be some lasting impact.”Car manufacturers have struggled to keep up production with the shortage in semiconductor chips.Ford, which had to cut its North American vehicle production in July and August due to shortages, said its second quarter earnings report that supplies were improving but that it lost production of about 700,000 vehicles during the quarter.General Motors said the chip shortage will cut its earnings by $1.5 billion to $2 billion and has been idling some of its North American assembly plants due to the shortage.Nissan said in May that it expected to make half a million fewer vehicles this year, while BMW recently warned that it expects the shortages to creep into 2021.In total, the chip shortage is estimated to cost automakers $110 billion in lost revenue this year, according to a May report from consulting firm AlixPartners.Used car companies see revenue soarCustomers inspect a Fiat Chrysler Automobiles NC Dodge Grand Caravan minivan at a Carvana Co. location in Westminster, California, U.S., on Thursday, May 28, 2020.Patrick T. Fallon | Bloomberg | Getty ImagesThe dip in production has been a boon for used car retailers like Carvana. The company reported its first profitable quarter Friday, bringing in $45 million of net income during Q2 2021. Carvana’s total revenue also grew 198% year-over-year to $3.3 billion as it delivered more than 107,000 cars, a 96% increase compared to a year ago and the first time in its eight-year history it has ever sold over 100,000 cars in a quarter. Carvana shares have risen 44% this year through Friday.Those gains have come alongside a large jump in used car prices. The average transaction price for a used car was $25,410 in the second quarter of 2021, up from $22,977 in the first quarter and 21% year-over-year, according to data from online automotive resource Edmunds. That figure marks the highest average price over a quarter for a used car that Edmunds has ever tracked.Debate over when used car prices level offThose high prices have helped fuel the used car industry.EchoPark Automotive, a division of Sonic Automotive that sells pre-owned vehicles, also set a record for quarterly earnings with $595.6 million in revenue, up 88.9% year-over-year. Retail sales volume was up 68.9% year-over-year.CarMax, the largest used-car dealer in the U.S., had a 138.4% increase in revenue year-over-year in its 2022 fiscal first quarter ending May 31, to $7.7 billion. The company said it sold 452,188 units through its retail and wholesale channels during the quarter, up 128% from the previous year.As for when prices may level off, Garcia said “over the next six months or even 12 months I think it’s hard to say.””What we’re finding out is that the OEMs have supply chains that are maybe a little more fragile than we all wish and they’ve got thousands of parts being manufactured globally and there’s Covid waves popping up in different parts of the world so I think that makes it really hard to predict when that will normalize again,” he said.In comparison, Sonic Automotive president Jeff Dyke recently said on CNBC’s “Worldwide Exchange” that he expects the chip shortage to alleviate in the coming months, which would start to lower the price of used cars.”New car inventories are going to get better progressively over the next few months as we get to the end of the year,” Dyke said. “As that happens, it’s going to alleviate the amount of inventory issues happening on the pre-owned side.”

Disney ‘should be ashamed’ for statement against Scarlett Johansson, SAG president says
Governor of Idaho, home to one of U.S.’ lowest vaccination rates, urges residents to get Covid shot
To Top
error: Content is protected !!