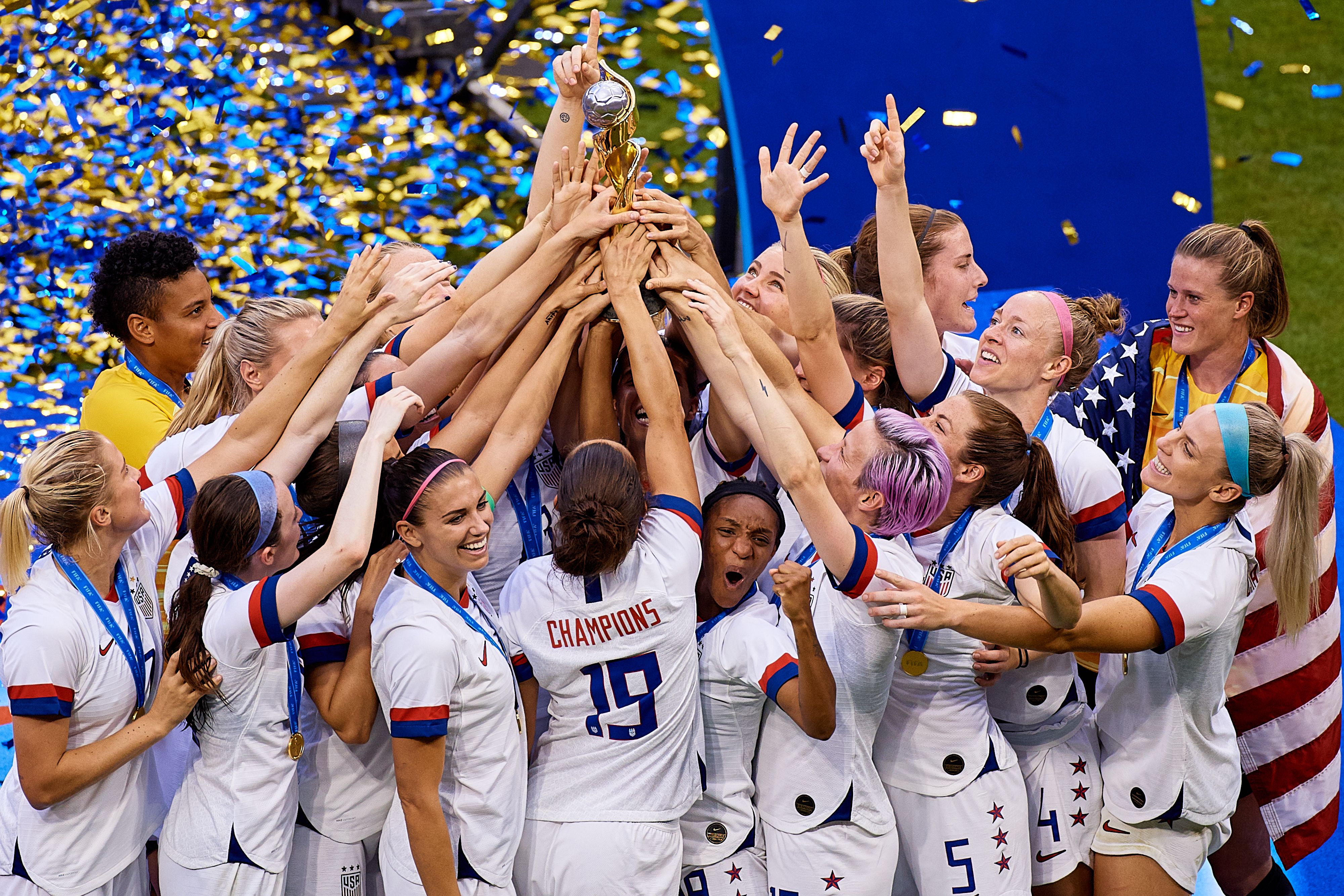 USA players raise the trophy after the 2019 FIFA Women’s World Cup France Final match between The United States of America and The Netherlands at Stade de Lyon on July 7, 2019 in Lyon, France.

The United States won its record fourth Women’s World Cup title and second in a row, beating the Netherlands 2-0 Sunday night when Megan Rapinoe converted a penalty kick in the second half and Rose Lavelle added a goal.

Rapinoe, the pink-haired U.S. captain who grabbed world-wide attention on and off the field, scored in the 61st minute after a video review determined Stefanie van der Gragt had fouled Alex Morgan with a kick to the shoulder in the penalty area.

Two days past her 34th birthday, Rapinoe slotted the ball past goalkeeper Sari van Veenendaal for her 50th international goal, her sixth of the tournament to win the Golden Ball as scoring leader. The oldest player to score in a Women’s World Cup final, she struck a familiar victorious pose with arms outstretched.

Megan Rapinoe of the USA celebrates following the 2019 FIFA Women’s World Cup France Final match between The United States of America and The Netherlands at Stade de Lyon on July 07, 2019 in Lyon, France.

Lavelle, at 24 the team’s up-and-coming star, added a goal on an 18-foot left-footed shot in the 69th after a solo run up the center of the field.

Rapinoe drew the ire of U.S. President Donald Trump during the tournament by saying she and teammates would refuse to visit the White House, part of the team’s wider push for gender equity. New York City Mayor Bill de Blasio needed just a few seconds after the final whistle to invite the team to a ticker-tape parade up the Canyon on Heroes in Manhattan on Wednesday.

Rose Lavelle of the USA celebrates with teammates following the 2019 FIFA Women’s World Cup France Final match between The United States of America and The Netherlands at Stade de Lyon on July 07, 2019 in Lyon, France.

The Americans never trailed in the tournament and set records with 26 goals and a 12-game World Cup winning streak dating to 2015. U.S. coach Jill Ellis became the first coach to lead a team to two Women’s World Cup titles, and the U.S. joined Germany in 2003 and 2007 as the only repeat champions.

With confidence and brashness that some called even arrogant — triggering a backlash that the angry response was sexist — this American team established a standard of excellence that will be a goal for other U.S. teams and the rest of the world to match. Former American players joined the current generation on the field for the postgame celebration.