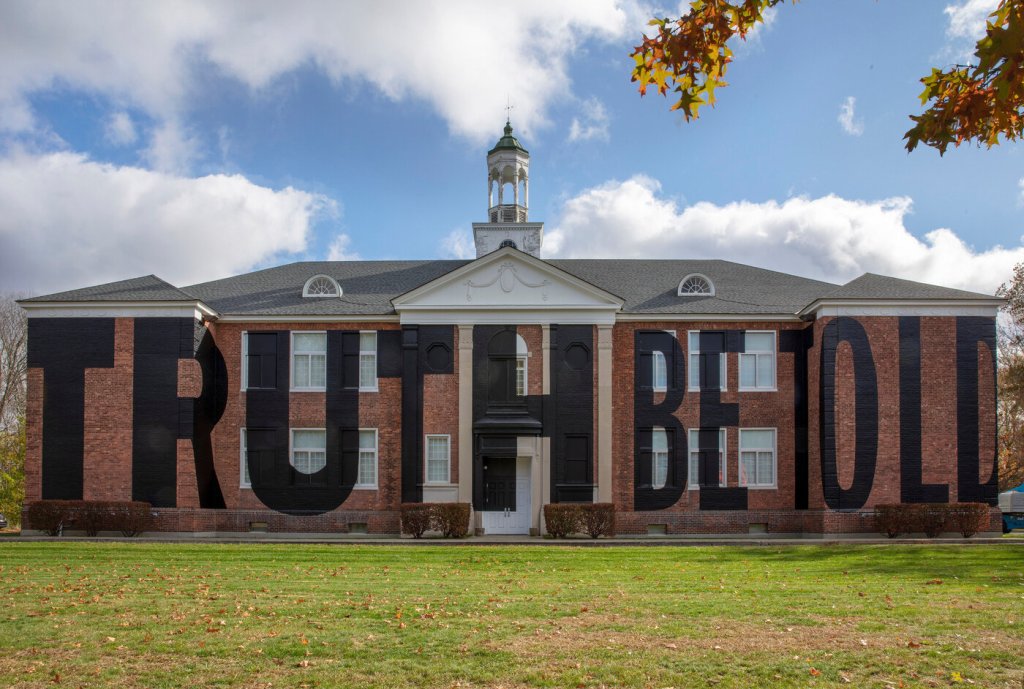 A giant work by Nick Cave on the facade of the School, an art space operated by Jack Shainman Gallery in Kinderhook, New York, is currently the subject of controversy among locals, the New York Times reports. The work, a 160-foot-long text piece called Truth Be Told, features its titular phrase splayed across the building and is intended to spur conversations among the community on policing and anti-Black racism justice in the wake of the killing of George Floyd by Minneapolis police in May.
Residents in Kinderhook have claimed it might be illegal to display the work. City officials have alleged that the artwork is technically a sign, making it in violation of local code. Shainman and his attorney, William J. Better, maintain that Truth Be Told is an artwork, and its display is protected by the special use permit that the School was granted when it opened in 2014.

Per a report in the New York Times, Shainman submitted a proposal to the Kinderhook on August 13 for construction of the work. The town refused to sign off on the installation, prompting debates between the two sides over whether the text-based work qualified as public art. Speaking to the Times, Shainman said, “I naïvely thought I could just explain it and they’d agree. They were saying it’s a sign, and it isn’t.” Shainman authorized the completion of the artwork before the issue was resolved, and the installation was completed on October 31.
The town stands by its original ruling, citing the potential fire hazard of the work which covers windows and doors on the  building. Better has called the concerns of flammability “the ultimate red herring,” making the point that Halloween decorations or comparable signage are perfectly legal to display.
Cave, who is based in Chicago, has considered issues of race, identity, and politics through works like his “Soundsuits” series, fabric noise-making costumes originally conceived in reaction to the beating of Rodney King by LAPD officers in 1992. In 2016, he unveiled Until, a monumental  installation at MASS MoCA in North Adams, Massachusetts; it immerses the viewer in found objects related to police brutality and gun violence.
“The gallery had to go to the city and ask permission. I’m like, just fucking do it,” Cave told New York Magazine upon the work’s debut. “Like John Lewis said when he said ‘good trouble.’ To me, it’s about that. You don’t need fucking permission. It’s an art gallery, a place of expression.”