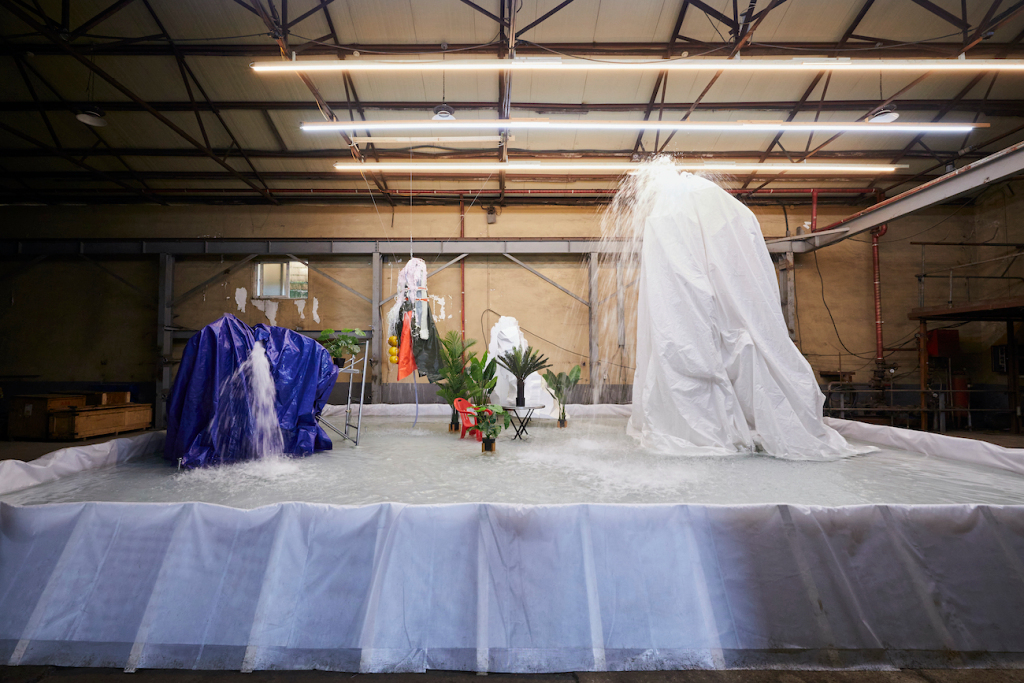 Even in the best of times, organizing an international biennial—wrangling dozens of far-flung artists and hundreds of works, all while keeping to a budget—is not an easy business. Organizing an international biennial amid a once-in-a-century global health crisis is another matter entirely.
But at a time when most such shows have been delayed, the curator Jacob Fabricius managed to pull one off in high style. His Busan Biennale in South Korea opened to the public weeks late, few of the artists were able to attend, and he had to spend two weeks locked in quarantine before installing, but it got done, and the result was a sprightly, multilayered exhibition that spanned the city’s gigantic Museum of Contemporary Art, a warehouse along its bustling port (the fifth-largest in the world), and spaces around town. It ran through this past Sunday.

Fabricius, the artistic director of the Kunsthal Aarhus in that Danish city, did not make it easy on himself. After being tapped for the role last summer, he asked 11 authors—Kim Un-su, Mark von Schlegell, and Pyun Hye-Young, among them—to visit Busan and pen narratives or poems. “I thought writers could create a web of stories discussing, showing the city of Busan in a kaleidoscopic way,” he said in an interview that took place via email and Skype. His goal was to create “a layer of fiction that the visual artists and musicians could react upon.”

Those texts informed his selection of 67 artists and the material they presented in “Words at an Exhibition: An Exhibition in Ten Chapters and Five Poems.” One example: Amalie Smith’s story “Electricity Speaks”—in which electromagnetism and electricity are characters—led to the display of pieces involving free-flowing energy. Lights blink rapidly in Camille Henrot’s zoetrope, animating cartoon characters; a new Carey Young video follows women doing meticulous work in a lens factory; and intricate gears and charts fill Jean Katambayi Mukendi’s enigmatic Clock.
A multi-course feast of a show, the biennale also including compositions by 11 musicians (like Rønnenfelt and Odaeri) and a zesty fragrance, for sale on site, that was formulated based on Busan smell memories that more than 100 respondents submitted. “You could say that biennials are usually promotions of different places,” Fabricius said. “You want to somehow put a focus on the location. And I thought, Why not just actually do that? Put maximum focus on a specific city—many different perspectives?” The mood ranged from that of a hardboiled detective novel (Stan Douglas’s noir photos) to an enveloping dream (Bianca Bondi’s room of salt mountains), with sly wordplay and charged histories interspersed throughout.

Since many artists could not conduct research or make their art in Busan, special arrangements were made. Kim Gordon asked biennale staffers to shoot video footage (“A young man/boy and girl wearing denim jackets looking at each other and then they kiss” was one note), which she spliced with her own footage in New York. The Aarhus-based Lasse Krog Møller sent them to particular locations, instructing them to pick up bits of trash and ask people to draw maps. Their finds fill vitrines at MOCA, artifacts of a transcontinental collaboration.
Clearly it was a peculiar experience for all involved. “When you do exhibitions, there’s usually a lot of social activity,” Fabricius said. “You have coffees, you have beers, you have dinners, and there were none.” While still in Denmark, he spoke with the local team for hours each day, for months, plotting the affair. Finally on the ground in August, he installed with artists who could not be present “through Zoom, Skype, and so on,” he said. Monica Bonvicini, who lives in Berlin, oversaw from afar the building of one of the most ambitious (and impressive) projects—a creepy, full-scale wooden skeleton of a house, As Walls Keep Shifting.
“It was somehow easier with people I know and had worked with before, but still not easy,” Fabricius said. “My body and brain had to be in many locations installing at the same time.” One can sympathize.

Despite all of the ingenuity involved in bringing the show to fruition, it was an open question when people would actually be able to attend it, due to a covid outbreak in South Korea in August. Fabricius was informed five days before the scheduled September 5 that no opening celebration could occur, and the public would not yet be allowed to come through. “We turned up the volume a lot of all online material,” he said. “The organization really stepped up and invested time and money in the online content, and as a foreigner it showed me how well-organized the Korean system really is.” He recorded video strolls through the show, and they got a 3D tour uploaded. Mercifully, in-person visits were able to commence in late September.

In any case, if you need a curator who can contend with adverse conditions, you could do a lot worse than Fabricius. In 2008, he was part of a small group that hitchhiked around Malmo, Sweden, performing artworks for people who picked them up for his “Auto Stop” exhibition, and on various occasions he has taken to the streets (including Fulton Mall in Brooklyn) wearing sandwich boards emblazoned with artworks and talking to passersby.
That said, Fabricius does not exactly recall his mandatory 14-day quarantine fondly. A few beers he brought in his suitcase “leaked during transport so my room smelled like a bar for four days,” he said. But he made it interesting for himself, awarding prizes to Instagram followers who correctly answered odd questions he tossed to them, like how many cornflakes measured the width of his TV. (65.) Only one artist, Bondi, who lives in Paris, made the same sojourn.
He didn’t have much of a view from his room, but one day, after more than a week inside, he spotted another human being for the first time, below his window. “I ran for my coffee cup, because I wanted to sit there and drink coffee, and just look at this guy,” he said, sounding a bit wistful. “But when I came back, he was gone.”